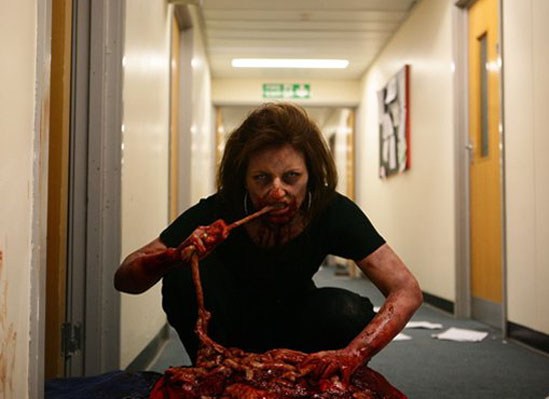 “Dead Set” is a horror/thriller (with a bit of satire thrown in) series airing on channel E4 in the UK and Ireland. The series centers around the housemates and film crew inside the Big Brother House during a zombie outbreak. There really isn’t anything groundbreaking in this series, as far as ideas or concepts in the zombie genre go. There are fast moving, raging, 28 Days Later-like zombies, and they spread through biting the living. Fairly standard. But the show is engaging, and the premise is, I think, a pretty clever take on an older concept. If you are familiar with The UK’s version of Big Brother, you know it’s ridiculously popular; there’s even a channel dedicated to a live feed of the house for people to watch and veg out to. So naturally, the Big Brother house is the epicenter of the crisis, with zombies instinctively being drawn to the set. Yes, I know, very similar to that other movie. The series is well written, and has a good share of humor (Question: If a paraplegic becomes zombified, why would they not regain the ability to walk once reanimated?) in the mix. But most importantly, it has good gore, and a lot of suspenseful moments, which are keys to success in the zombie genre. The only thing that could have made it better for me would be sharks, and fights with said sharks. Maybe during the follow up series.