Death Demands Celebrities and Gets Two 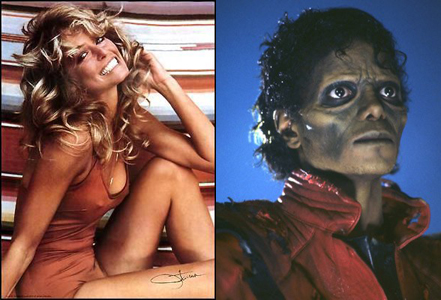 Well, seems like the whole celebrity deaths come in threes came true this week (sorry Ed McMahon, no obit for you!) as both Farrah Fawcett and Michael Jackson died today.  Fawcett of cancer at 62 and Jackson of a heart attack at 50.  Both stars were famous in part for giving adolescent boys boners (albeit in very different ways).  Farrah was just one of the hottest women on the damn planet and in later years won some Emmys.  Jackson was a global phenomenon who became a total weirdo.

Rather than go into long eulogies or anything like that, I would like to take this moment to point out an important health tip.  Fawcett and Jackson were both really skinny and in good shape and died relatively young.  The last two celebs who shuffled off this mortal coil, Ed McMahon and Dom Deluise, were booze swilling fatsos who did whatever they wanted.  So the next time you have a choice between the elliptical or a delicious sandwich, think about MJ exercising his ass off getting ready for a tour and then think of Dom asking for another cannoli.

Also – after the jump – watch the Cannonball Run Blooper Reel and see the sad, updated standings.