Denzel Will Fix the Ocho 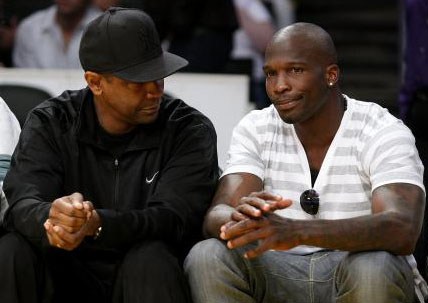 But the problem is, the Ocho does not need fixed.

Yet when Cincinnati Bengals wideout Chad Ochocinco met Denzel Washington at a Los Angeles Lakers game this past spring, it wasn’t the mutual fawning session you might expect. Rather than compliment the receiver formerly known as Johnson for his athletic excellence, Washington called him out, portraying Ochocinco’s lost 2008 season as a self-inflicted nightmare.

“He got on me about the way I handled myself last off season,” Ochocinco recalled in a phone conversation last week. “He wasn’t being gentle. He said, ‘You know what? You need to straighten up and stop fussin’ about something you have no control over. Make it fun again because it sure looks better when you do it that way.’ That’s all I needed to hear, especially from somebody like him.”

So, let me get this straight, Denzel is getting on Ocho for his having fun on the football field.

Please. Ocho is going to be alright. He catches footballs and he does awesome TD celebrations. And has crazy antics. Here’s some quick facts…

FACT: When Ocho acted the fool and everyone laughed…they made it to the playoffs.
FACT: When Carson Palmer sucked, they blamed Ocho’s antics instead of the whole CARSON NOT BEING GOOD thing. Plus they have the worst head coach, Marvin Lewis, in the NFL.
FACT: Ocho’s acting a fool is hilarious and does not prevent them from winning games.

Denzel…you’re awesome. My favorite actor, but go get in Marvin Lewis’ ear.

Besides, who the hell got in Denzel’s ear to chastise him when he did Deja Vu?