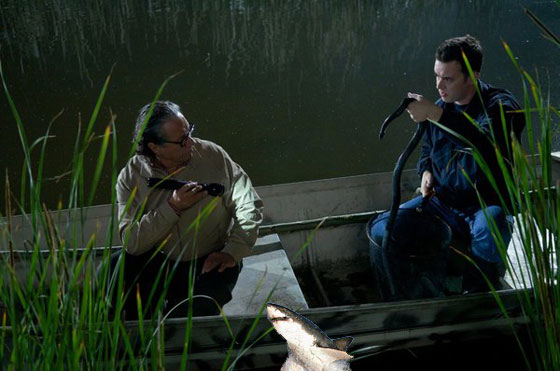 Is that Fonzi I see on skis?!?

Tonight (thank you sweet cherub baby Jesus for providing us DVR capabilities) (I think) I finally finished up this Season (6) of Dexter.
Uh.
Right.
John Lithgow’s performance on the show just cannot be followed; Dexter peaked at Season Four with “The Trinity Killer” and not a damn thing has been right since then. Losing your show’s head writer will sometimes do that to you.

I struggled through watching Julia Stiles character Lumen Pierce (Season Five) on screen. I felt like Tori Amos was going to bust into Cornflake girl at any moment, so help me. Every episode felt like molasses, no surprises, no emotional ties to characters, it gave me nothing. But I watched, just like I slugged on over to the couch during every episode that aired with Jimmy Smits because with every uphill climb, there has got to be a downward slide. So, I entered into Season Six thinking, please. Please, pick up the pieces and give me something to really get behind before I leave you in the kill room with your cellophane wrapped corpse and more bizarre with every episode hair.

LOOK OUT FOR THAT SHARK!!!

Dex has so far tackled: a bad childhood nightmare, unholy big brother type, oh no you are gonna get caught!, weirdo daddy issues, coming to terms with attachment to others, infidelity, killing an innocent, shaking off a groupie, wedding, family, fake family, becoming a groupie, rape, revenge, sympathy… what could ever be left? Religion.

Le Sigh. Here is the round up. Delivered, via Haiku.

Episode 4:
All I do is wait.
(Four Horsemen. Apocalypse.)
Wait for more to die.

Episode 5:
Oh my, a journal.
Who knew black guy would not last.
Whore of Babylon.

Episode 8:
Back in Miami.
Got to find those God killers.
After hooker case.

Episode 11:
There was a call girl?
Homeland Security, huh?
All wrapped up, one hour.