Did the landscape of baseball change dramatically? 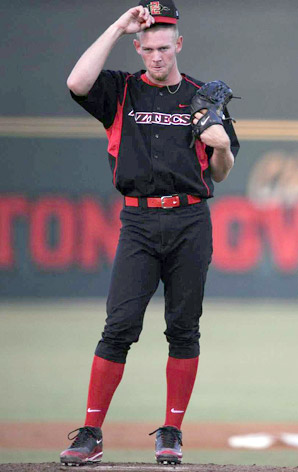 In last night’s MLB Amateur Draft, the first televised, Stephen Strasburg, pitcher from San Diego State, was selected first overall. The dude had crazy numbers in his final season of college and is supposed to be flat out electric. Strasburg was the runaway best talent in this draft, hitting over 100mph on the radar gun at times this season.

The problem, is when Scott Boras enters the equation. Boras, would like Strasburg to be signed by his drafting team, the Washington Nationals, for a ton of money. The 50million label has been tossed around and all you really need to know is that it would SHATTER what had previously been given to players taken in Strasburg’s position.

So, where does the landscape of baseball changing? If Strasburg signs for an off the board sum of money, what happens next year and beyond?

The problem is committing tons of money to players that are far away from the majors. Often compared to Strasburg is Ben McDonald. McDonald was dominating at LSU and selected #1 in 1989. What would have happened if the Orioles had to commit so much money to McDonald?

The flip side, is that in recent years, the #1 pick seemingly has more positive impact on the drafting team. In the last ten years, Josh Hamilton, Adrian Gonzalez and Joe Mauer were selected in the spot. Also selected was Justin Upton, who has been in the majors a bit now and is something like 20yrs old already. He is not yet an all-star, but is having an all-star season right now. Also? Luke Hochevar and David Price. Selected #1 in 2006 and 2007, both players find themselves in the majors this year. That’s 6 success stories.

If you discount last year’s draft as too recent, that’s a fairly high success rate. As well, there’s only two absolute duds in there in Bryan Bullington and Matt Bush. The 9th #1 pick, Delmon Young, has been in the major leagues a lot. Sure, he hasn’t fulfilled potential, but there is still time and he hasn’t been a ridiculous bomb.

If you peel back the next ten years going back to McDonald’s selection in 1989 here is what you find: Four players who at least made one all-star game in Chipper Jones, A-Rod, Phil Nevin and Darin Erstad. Two serviceable MLB players in Pat Burrell and Kris Benson. Four duds, including the epically bad selection of Brien Taylor by the Yankees.

If you factor in that some of these selections came from high school, it’s not mind-blowingly bad. Or, not as bad as I would have guessed.

On the surface, this isn’t a great situation, and I’m not sure I could commit that much money to Strasburg if I were the Nationals, but, I don’t think it will be as dramatically altering to the sport as is suggested by many. By and large, the bulk of players in the draft are going to be crapshoots and their salaries will still reflect that. All this really will do is put the top picks and top pick risk on par with other leagues like the NFL and NBA.