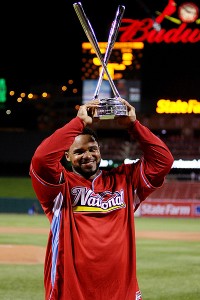 This man is a vegetarian. You explain it.

With the All-Star Game in St. Louis everyone expected Albert Pujols to dominate this Homerun Derby. Afterall, he is more machine than human, correct?

Instead, Albert Pujols barely made it out of the first round. The big show of the night went to Prince Fielder and Nelson Cruz, who were the only guys to hit double digits in any round of the event, with Fielder winning.

The best moment was probably when Brandon Inge hit ZERO homeruns. An impressive performance by the Tigers third baseman. I can’t remember that ever being done in the Derby, but that just means my memory sucks because like four guys have done that in the past ten years. Allegedly.

The Derby can be summed up in entertainment value by the fact that when the celebrity softball game eventually came on after the Derby, I was more entertained by the way Nelly caught a pop-fly than anything in the Derby.