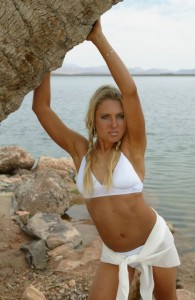 she plays golf. trust me on that. well, actually, do not, as i've never seen her play, but she said she did on Celeb Apprentice...

Apparently, LPGA golfers believe that Twitter is beneath them.

A week after LPGA Tour Commissioner Carolyn Bivens said she would “love it” if players used the social media site Twitter.com to connect with fans during their rounds, Creamer is one of the players who rejected the idea.

“I will not be twittering in my round,” Creamer, who’s ranked third in the world, wrote on her Twitter page shortly before teeing off. “It should not happen in any sport. The players have already told the tour no way.”

Twittering while you golf is likely really easy. Most people who golf are getting drunk anyway, so adding quick messages wouldn’t seem to be an issue to someone who has golfed their entire life.

Tiger put a dent into a 30 of Busch Light on the daily when he was playing practice rounds to recover from his knee injury.* How else do you pass that time between the shots? Just walking and, thinking? Really? The same person who is too cool to twitter in round also twittered while eating breakfast. I don’t know if I’m the norm, but I concentrate more while eating breakfast than I do when I am playing golf.

* Not true. Well, true, likely, but by no means verified or involving an attempted verification. Safe to assume, however.