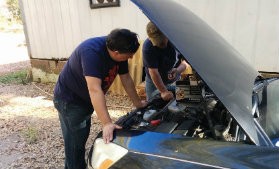 A couple days ago, I put up a poll to make people guess how Redneck Tommy’s Pit Bull lost its eye and promised to give the answer the next day. Then the poll didn’t work right and things got hectic and we had to bail Acadia out of a Russian prison. You know how it is.

But I won’t leave you in suspense any longer!

To continue the story, we were looking at a photo of a Pit Bull with one eye. Tommy said “You see he’s missing that eye? A horse kicked him in the head and he lost the eye. So he killed the horse.”

THIS PIT BULL KILLED A HORSE FOR KICKING IT IN THE EYE.

We were horrified. But we had to keep a straight face because by the time this story came up, Tommy had already removed the dead alternator from Jay’s car and hadn’t put the new one in yet. We had no way to escape so we politely commented “Oh. Wow.”

Luckily for us, the dog had died a few years ago. Because let me tell you, if he’d pointed to a living dog and attributed this story to it, I’d have excused myself to lock me and Riley in the car until it was fixed.