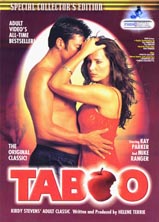 The only taboo for me is the kind where you get to do your hot sisters and your hot mom!

I know it is Memorial Day weekend, so you might have some plans.  Cookouts, some charming local festival, maybe a trip to Costco.  But what if it’s raining?  What if you have the Swine Flu or a broken leg?  What if that leopard that has been in your driveway and who also somehow cut your phone lines just won’t leave?  Well, that means you are stuck in the house and you get to watch a shit ton of TV.

And cable TV is there for you by running tons and tons of marathons.  Get sucked in right at the beginning, and then realize that you have not moved for 14 hours cause you just had to find out what happened.  Interesting Pile did all the work for me figuring out what marathons were on, but he didn’t write up descriptions of the shows like I am.  Even if I have no idea what the show is about.  And no, I am not going to look them up.  I don’t have time for that.  I need to hurry up and pump this thing out so I can get some waffles.  Solemn memory of our fallen soldiers waffles.

Sunday and Monday after the jump!