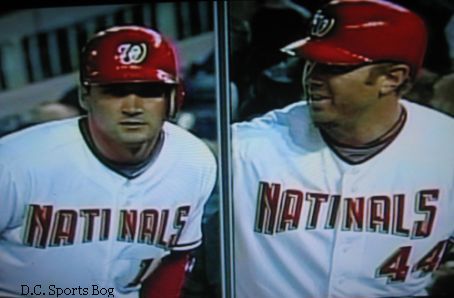 Yeah, might want to have an O in there somewhere

Economy is screwed up, gotta cut back in all sorts of ways. Major League Baseball currently appears to feel some of this with several jersey cutbacks in the early going.

First, it was the Washington Nationals. Pictured above saving on stitching and lettering by removing the letter “O” from several jerseys. No telling how much the Nationals saved by this slight embarrassment. But, likely at least a buck or two.

TORONTO — To say Darren O’Day’s Wednesday was a whirlwind of a day would be a massive understatement.

The right-handed reliever began the day looking for work, and by the end of it, he was halfway across the continent pitching for the Texas Rangers in their game against the Blue Jays at Rogers Centre.

And if that wasn’t crazy enough, O’Day entered the game wearing another player’s jersey.

While on the road, the club’s equipment manager usually carries around the jerseys of several players who could possibly get called up, and of course, O’Day was not one of those players. So O’Day was forced to don the jersey of Kason Gabbard — who is currently with Triple-A Oklahoma City.

O’Day in the Kason Gabbard jersey threw 5 pitches and gave up the game winning pitch. Kason Gabbard was probably pissed at this impersonation. Well, not so much Kason himself, but someone in a 25 team AL-only keeper fantasy league.