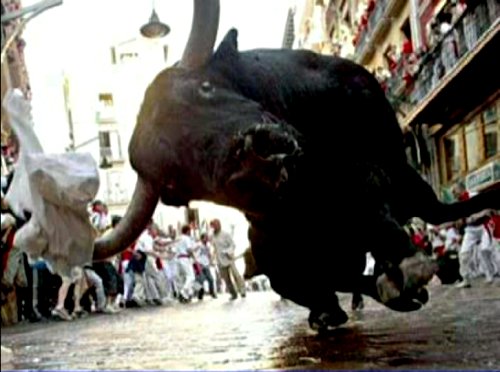 Before you woke up today, someone in Pamplona might have been seriously injured. Yes, that is right, it’s time for the Running of the Bulls. While only 14 people have died in the Running since like 1910, all sorts of motherfuckers get hurt on the annual. I mean, they are running with bulls, after all.

This year? The world’s economic downturn has led to less folks partaking in the running.

There are less folks in town to run with the bulls (and booze before getting knocked over and trampled), and TV rights are slimmer. Foreigners flock to this thing, but not so much this year.

Fortunately, one bar mentioned in the article said they were buying the same amount of booze as normal despite less folks there. So, if things go well, people will be more hammered when running alongside the bulls and absolutely nothing can possibly go wrong in that equation.