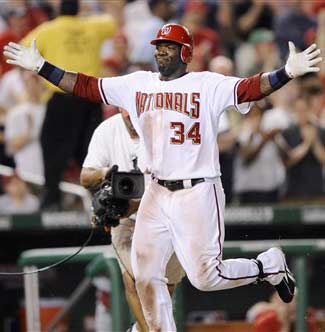 Yeah, I'll sign that for ya, kid, I ain't even bullshittin'.

The headline of Elijah Dukes being benched doesn’t surprise anyone. He has been arrested something like a dozen times in the past 10 years. He sent a text message to one of his baby mama’s that was simply a picture of a handgun. He left messages to her calling her “dawg” a handful of times and to make sure her motherfucking ass was not riding, because shit was “on”. On being dead. Apparently. Allegedly?

However, if you look at why the Washington Nationals benched Elijah Dukes this past weekend, you wonder if this is the same Elijah Dukes.

WASHINGTON — Nationals right fielder Elijah Dukes was scratched from Saturday’s starting lineup against the Marlins and fined $500 for being five minutes late for work.

Dukes was late because he was signing autographs at a Little League function that was not sponsored by the Nationals.

Signing autographs for little leaguers gets him a benching these days? Is that really necessary to discipline him? It gets worse because now they have threatened to send him down to the minors for any further tardiness. Can’t you just have a conversation like this:

Not like their going to win games anyway, right?