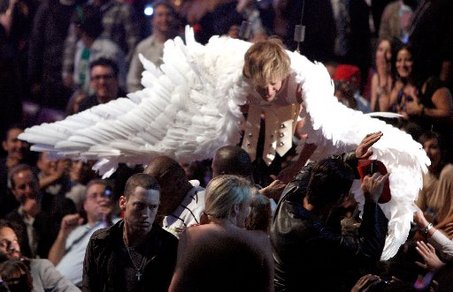 So, that Eminem-Bruno thing from the MTV awards the other night was admitted as fake this week. I’m not sure that was ever an issue with ANYONE. This, however, is an issue…

Eminem was last seen on the broadcast storming out of the venue with his entourage immediately after the incident. So where did Em go? “I went back to my hotel and laughed uncontrollably for about three hours. Especially after I saw it on air,” the rapper said.

Good God, man, that’s like a chuckle moment at best. What kind of vacancy does Eminem have in his life where this moment was something that would bring that much laughter?

Unless Eminem laughs for 10 hours straight whenever a buddy says something like, “Em, your shoe is unlaced, you almost tripped, dog,” then he seriously needs to consider finding more things that are hilarious and introduce them to his life.