Estate of Panic – Society Marches Towards the Cliff 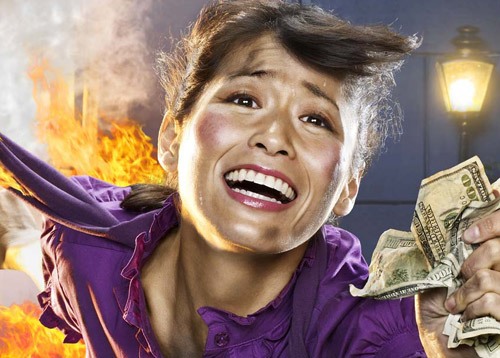 Estate of Panic is a new game show on the Sci-Fi Channel.  I watched it this week and I will probably watch it again.  Even though that I know watching it will hasten the end of civilization as we know it.  The premise is 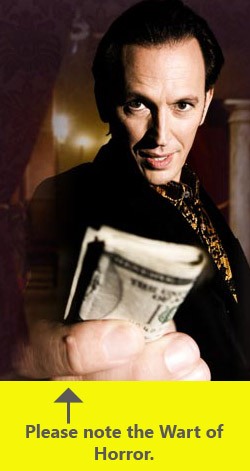 The contestants go to a creepy house with a weirdo guy (see pic on left) and his weirdo butler.  He has summoned the people there to go through his house and steal his money.  But the places they have to go are all crazy and trapified and dangerous.

They had to go to the basement first.  There was money hidden all around but then they found out that the room was filled with snakes.  And then a pipe broke and it started filling up with water.  Like – a LOT of water.  And the snakes were all swimming around and it was all hectic and nuts.

So after the first round, the host has all the people in his big living room or whatever.  They are soaked form the flooded basement and he makes them take off their shoes and socks.

Then they have to go to the garden.  There is money in there, but there are also a shit ton of wires.  Electric wires.  Live electric wires.  So yeah, they get these people all wet, make them go barefoot, and then shock the crap out of them while they dig around looking for money. Think about that.

I am not gonna tell you what the last round is (I will link the episode so you can watch it for yourself.  But I want you to consider the fact that we have now moved to a sitch where people hurting themselves for money is entertainment.  Don’t get me wrong.  It was awesome – but I do want you to consider where we are going.  So click Continue Reading to see the episode as well as the three shows I have always wanted to make and now feel the public is ready for!

Watch the whole premiere of Estate of Panic.

Now – here are my three awesome TV game shows that some producer needs to contact me about!