Eve was First and Adam was a Boob 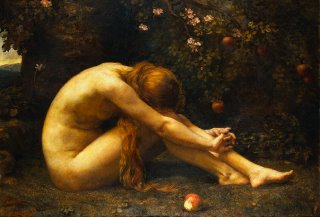 After three weeks in the Garden of Eden, God came to visit Eve. “So, how is everything going?” inquired God.
“It is all so beautiful, God,” she replied. “The sunrises and sunsets are breathtaking, the smells, the sights everything is wonderful. But I have just one problem. It is these three breasts you have given me. The middle one pushes the other two out and I am constantly knocking them with my arms,catching them on branches and snagging them on bushes. They are a real pain,” reported Eve. And Eve went on to tell God that since many other parts of her body came in pairs, such as her limbs, eyes, ears, feet. She felt that having only two breasts might leave her body more “symmetrically balanced,” as she put it.
“That is a fair point,” replied God, “But it was my first shot at this, you know. I gave the animals six breasts. So I figured that you needed only half of those. But I see that you are right. I will fix it up right away.” And God reached down, removed the middle breast and tossed it into the bushes.

Three weeks passed and God once again visited Eve in the Garden of Eden. “Well, Eve how is my favorite creation?”
“Just fantastic except for one oversight on your part,” she replied. “You see, all the animals are paired off. The ewe has a ram and the cow has her bull. All the animals have a mate except me. I feel so alone.”

God thought for a moment and said,
“You know, Eve, you are right. How could I have overlooked this? You do need a mate and I will immediately create a man from a part of you. Now let’s see…where did I put that useless boob?”

Now doesn’t that make more sense than that stuff about the rib?