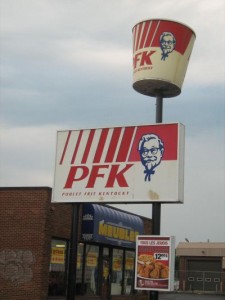 Canadian’s want to be fat just like Americans. KFC is letting them down. Unlike the other fast food chains KFC has a history of caving into the star chamber proceedings of the Canadian Parliament. McDonald’s waves it’s very un French apostrophe proudly in Quebec flaunting the La charte de la langue française. KFC changed their entire name to PFK in Quebec, that’s Poulet frit Kentucky not some new radical group planning to kidnap Paris Hilton and make her rob banks like Patty Hearst. Now KFC has caved in again.

On October 14 the Double Down sandwiches were introduced in Canada. This glutinous tribute to fast food substitutes slabs of fried chicken for the more normal buns. Health Canada reported an immediate increase in heart attacks as granola eating types keeled over in shock at the mere concept of the 540 calorie wonder. The rest of Canada couldn’t buy them fast enough. Despite the vigorous protests of healthy eating advocates the Double Down became the most successful menu item in the history of Canadian KFC. Then it disappeared without warning on Monday. 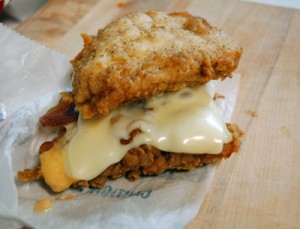 KFC didn’t indicate why the sandwich disappeared, instead Yum Restaurants Canada (The Parent company of KFC Canada) issued a statement: “To be the source of so much excitement, humour and debate has been a phenomenal experience for KFCs from coast to coast,” Obviously secret pressures were put on Yum Restaurants. The same group that covered up the UFO landings in Shag Harbor Nova Scotia obviously has quashed the Double Down sandwich for reasons that only the cigarette smoking man can comprehend. 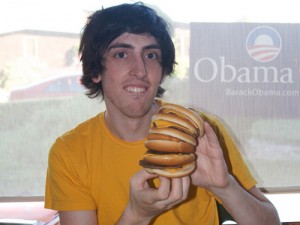 What KFC needs to combat the secret anti fast food assault is a stealth menu item like McDonald’s McGangBang. What is a McGangBang? Alert the secret minister of public health, a  McGangBang is an entire McChicken sandwich inside a Double Cheeseburger. It’s turning the dollar menu into your own private sandwich menu. The next time you’re driving past a McDonald’s give into the impulse to fight the hidden agenda of the Men In Black to ruin fast food and order a McGangBang. If you’re a Canadian march in to a PFK and make sure you get your share of liberty, grease and cheese. If you can’t get a Double Down order Poutine! Now there’s a wonder of grease and delight you can’t get in the United States and you can find it on the menu at all the big Canadian fast food chains from McDonald’s to KFC! 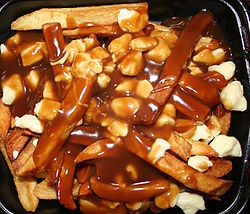 This is Poutine and French Canadian's Love it

“McDonald’s loves to hear from our valued guests, especially when they customize and create meal combinations to fit their personal taste preferences – no matter how unique!

Whether it’s requesting an Egg McMuffin without cheese or a Big Mac with extra secret sauce, McDonald’s is proud to satisfy our customers’ requests and provide them with a variety of great-tasting meals every time they visit our restaurants.”