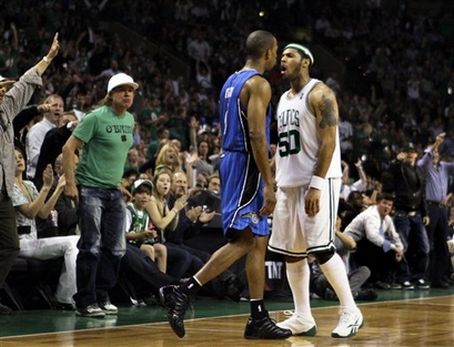 Am I the only one who found it wholly necessary for skip! to slap eddie house the other night? Eddie got in his ass, man...you need him out that ass fast!

Cats got wild on Wednesday night. First, the House fire was spreadin’ and Rafer “Skip(then something like 2mylue but in a street slang written manner)” Alston only doused it with a slap to the back of the head instead of busting out the hoses. Then, in Los Angeles, Luis Scola gently fouled Lamar Odom, dudes talked, then Derek Fisher went Mighty Ducks on Scola with a bodycheck that has Fisher ousted for tonight’s game.

And, oh yeah, Kobe elbowed Ron Artest and somehow that did not end with a melee in the crowd. maybe tonight that goes down.

Two NBA games on the slate with the Series tied at 1-1, which makes these game 3s fairly pivotal compared to the chippiness of the game 2s.

The NBA might be on to something here, however. Quality basketball that is competitive and also physical…hmmm, when has that ever worked in the NBA? Ohhhhhh, the 80s?