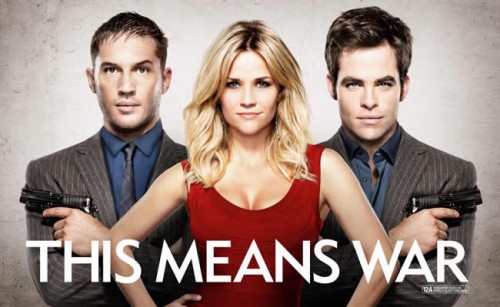 If it walks like a duck and quacks like a duck, then it is reasonable to assume that it is, in fact, a duck.  However, sometimes we give others the benefit of the doubt and willingly put aside the obvious.  So if that duck were wearing a sign that said “I’m a goose,” we just might, on a good day, take its word for it.  Or maybe I am just ridiculously gullible.

Now, I don’t want to condemn the movie for everyone because, in truth, nearly every single one of my friends (girlfriends) loved it.  Perhaps it was who I went with, or the mood I was in when I saw the movie.  Either way, I think This Means War is the worst thing I have seen in theater, in years.  Some of you are probably thinking, “Of course it was bad, Finch!  Did you even see the cheesy previews?”  But I saw explosions and cool action scenes in the commercials, so I thought that it would be a good date night movie; a little bit of this and that for both genders.  I was wrong.

This Means War was about two best friend CIA agents (Chris Pine and Tom Hardy) who fall for the same woman (Reese Witherspoon) and then duel it out with each other.  Meanwhile though, there is a questionably scary Russian mob boss, who hunts the two agents down for the purpose of taking revenge and killing them.  Sounds action-packed, but 80% of the movie is Chris Pine and Tom Hardy courting Reese Witherspoon and stepping on each other’s feet in an (again, questionably) humorous manner.  Some parts did succeed in making me laugh, but overall the movie was a dud for me in the funny department.

This Means War was a poorly disguised duck, which would not have been too much of a problem if it were not a really ugly and cheesy duck on top of it.  Unless you can find enough amusement looking at two semi-attractive, semi-homosexual men for an hour and a half to pay for the ridiculous amount of money you spent to sit in that theater, avoid This Means War at all cost.  6 out of 10