The best cowboy movie of the 90s is Unforgiven.  No contest.  Then, I dunno.  Dances with Wolves?  Tombstone?  That had Kurt Russell in it which immediately improves it.  But I think Young Guns II needs to be on the list.  Even if the only reason is that there weren’t that many cowboy movies in the 90s and it would be mean to exclude them.  I have NO recollection of this movie and I didn’t know the theme song (this week’s feature, Blaze of Glory) was a JON Bon Jovi song and not just a Bon Jovi song. How did that happen?  I mean, what was the rest of the band doing that day?

I know both he and Richie Sambora both did solo albums but it doesn’t seem fair from a name recognition standpoint to have to be “Richie Sambora” when Bon Jovi got to be Bon Jovi.  Bon Jovi should have had to call his album “Jon”.  Or he should have at least had his agent investigate the costume and set choices the video director made.  Take a look at this.  Honestly. 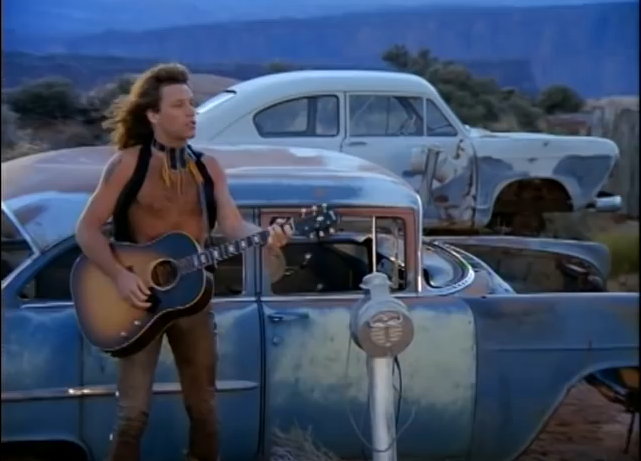 OK, Jon, here’s what we do.  We dress you up in grossly tight pants, a weird Han Solo vest and a necklace that would be considered racist if the NFL sold them.  Then we comb the desert until we find the drive in theater that Wiley Coyote built to trick the Road Runner in 1954 and make you sing in it.  It’s GOLD I tell you.  GOLD!  And Jon said: “Okay. It will still be better than anything Sambora does.”  Poor Sambora.

Oh, as bonus after the video.  Not only did Young Guns feature Keifer Sutherland (now a TV guy), Cameron from Ferris Beuller (no idea), Emilio Estevez (no idea but how could he have not filled the void his idiot brother left when he flaked out?), Christian Slater (TV if he’s lucky) and Lou Diamond Phillips (SyFy, which is like TV but sadder) but it also had one MOVIE STAR and that guy from CSI.  No joke.  The CSI guy was in Young Guns II.  No WAY you people knew that.  Don’t lie to me.