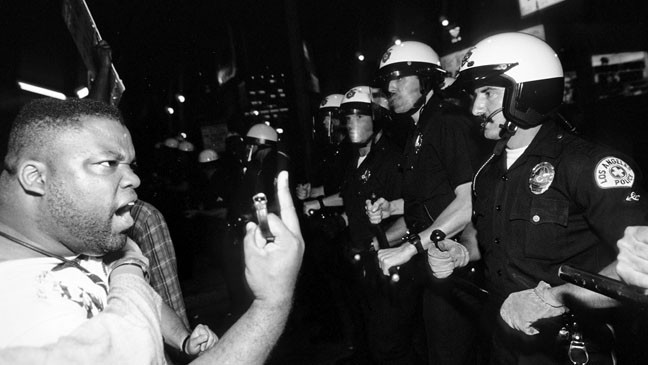 I will now complain that things were harder when I was younger.

IN MY DAY IF YOU WANTED TO KNOW THE COPS WERE RACIST YOU NEEDED TO CARRY AROUND A BIG ASS VIDEO CAMERA.  People didn’t have phones in their pockets.  And nobody had a camera except people at weddings (the little disposable ones) and Peter Parker (big ones with fancy lenses).  So the only thing white kids in Maine knew about how the police treated black people was from watching the Rodney King video.  Oh, and watching one of the five million movies on the topic released in the ’90s or listen to old NWA songs, but real life violence was restricted to the merciless beating of Mr. King.

I still don’t get what they thought he was gonna do.  I think the only way he could have hurt those 700 cops around him is if he was carrying a 40 full of Nitroglycerine.  Actually, considering how bad they messed him up, that might not be a bad defense for black guys going forward.

News Report of the Future: Police were about to beat down the suspect but were afraid he might have some nitro on him and blow up.  So then they decided to shoot him but then they were worried he would fall and blow up.  So they had to go through their handbook and realize that they could just tell him to stop and see what happens.  Might work.  But then they were afraid if he DID stop they would blow themselves up frisking him so they just left.

Now when L.A. rioted they messed a TON of stuff up.  You can learn about it here.  I’m not explaining it because I’m not Schoolhouse Rock (though I did talk about it last summer) but I will tell you that the Baltimore riots are piddly ass compared to those.  But then it all got ruined for a few reasons:

Reginald Denny was the white dude truck driver who almost got killed by some rioters and then got saved by some other black people.  Now that was a problem because it let dumb people do something that dumb people ALWAYS DO.  They make false equivalencies.  The police department of L.A. was somehow exonerated by the fact that some black guys beat the crap out of a white guy for no reason.  Soooo everyone is at fault which really means that nobody is at fault so let’s just forget about it.

That is never true.  Ever.  Just because some civilian beat up a white guy during a riot doesn’t mean that the people we pay to protect us can just whale on a whole bunch of people because of what they look like.  They don’t cancel each other out.  They just don’t.  And just because issues have two sides do not mean that each side is equal.  They are not.  Want to know how I know?  Because NAMBLA exists.  So don’t fall into the trap that you need to be respectful of other people’s opinions.  You don’t.

Oh, and as an added bonus:  If you are arguing with someone and you make a statement and their way of refuting it is an anecdote, you just won.  There is always some stupid example of the opposite of something someone is going to say.  IN THEORY I could end up on a date with Charlotte McKinney.  IN THEORY if I “put my mind to it” I could become an Army Ranger.  But in reality, I can’t.  I am too old to be in the army and the odds of me meeting Charlotte are super low (though that is all that is holding me back).  And just because some black kid from East St. Louis invented a new kind of pen or something and made it rich doesn’t mean that those kids in Baltimore have a realistic chance of getting out of Baltimore and living a life where the city bus is no longer a factor in their day to day.  Which brings me to the second problem.

If you stop rioting, then you committed a crime.  If you keep rioting, you might change something.  See (and I get that I will probably get some flak for this and I admit that I am sort of playing theoretical games where other people have to actually live their lives but whatever you can stop reading if you want you boner – also I am not too worried about being arrested for inciting a riot because only like, 10 people read the site) I think the only way the L.A. Riots (or the Baltimore ones) could be a success is if they don’t stop and get way worse.  If a CVS burns down people can say: “look at those stupid people burning down their own CVS, how they gonna get 1/2 price easter baskets the day after easter now?”

But if you burn down the entire part of town where you have been crammed then all of a sudden people say: “holy crap what’s gonna happen to these thousands of people who don’t have anywhere to live now?”  Then you have refugee camps in America and China is making fun of us and something will have to break.  Then you have the UN asking us if we need some help.  Then you have a situation that needs to be dealt with instead of kicked down the road.   Please note that Rodney King was 24 YEARS ago.  And it isn’t like everything was awesome up until then.  But the argument is always the same:  stop rioting and use the system to fix things.  Violence never solved anything.  Martin Luther King!  Ghandi!  Bullflop.

When someone tells me that violence doesn’t solve anything I ask them what the Revolutionary War was.  Because Europeans got to this continent in 1620.  There were riots in 1765 because of the Stamp Act.  And we kept on rioting until we started the war.  A WAR!  And it was the exact same situation that the people in Baltimore are in.  The institutions of government being stacked against a group until that group can’t take it anymore.