MC Hammer – U Can't Touch This 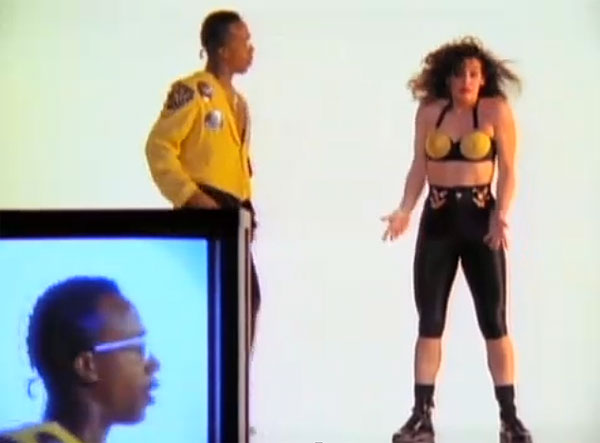 Since it’s pretty much the three year anniversary of Friday Nineties I thought I would post a song I know everyone knows.  Seriously what a great song.  And were this not one of the greatest songs of all time I would totally make fun of the terrible video.  It’s like they filmed it over two days and on the second day they were locked out of the studio so they just made everyone dance outside the building.

But really watch the video.  The only one in the whole thing that can dance besides Hammer is the chick in the blue biker shorts on the stairs.   She is hypnotic.  If I could make gifs I would make one of just her parts.  And maybe one of the weird second where Hammer just appears on the screen with no shirt on and sort of has a seizure.  I bet that gif would make him some money, which he sorely needs (look up how he went all bankrupt).  Maybe he should try to get LensCrafters to recreate the video wearing their glasses.  Those things don’t fall off no matter what he does!

Or don’t think about his lackadaisical backup dancers, financial problems or anything else and just reflect on how awesome this song is.  Seriously.  And maybe you can be like me and look at the lyrics and realize that for the last 20 years you have been saying: “Fresh new kicks….and pants” and were completely wrong.  Whatever.  My way is better.  And happy three year anniversary to Friday Nineties!

My, my, my music hits me so hard
Makes me say “Oh my Lord”
Thank you for blessing me
With a mind to rhyme and two hype feet
It feels good, when you know you’re down
A super dope homeboy from the Oaktown
And I’m known as such
And this is a beat, uh, you can’t touch

Fresh new kicks, advance
You gotta like that, now you know you wanna dance
So move, outta your seat
And get a fly girl and catch this beat
While it’s rolling, hold on
Pump a little bit and let ’em know it’s going on
Like that, like that
Cold on a mission so fall them back
Let ’em know, that you’re too much
And this is a beat, uh, you can’t touch

Give me a song, or rhythm
Make ’em sweat, that’s what I’m giving ’em
Now, they know
You talking about the Hammer you talking about a show
That’s hype, and tight
Singers are sweating so pass them a wipe
Or a tape, to learn
What’s it gonna take in the 90’s to burn
The charts? Legit
Either work hard or you might as well quit

That’s word because you know…

Break it down! (Music breaks down) Stop, Hammer time!

Go with the funk, it is said
That if you can’t groove to this then you probably are dead
So wave your hands in the air
Bust a few moves, fun your fingers through your hair
This is it, for a winner
Dance to this and you’re gonna get thinner
Move, slide your rump
Just for a minute let’s all do the bump, bump, bump

Every time you see me
The Hammer’s just so hype
I’m dope on the floor and I’m magic on the mic
Now why would I ever stop doing this?
With others making records that just don’t hit
I’ve toured around the world, from London to the Bay
It’s “Hammer, go Hammer, MC Hammer, yo Hammer”
And the rest can go and play