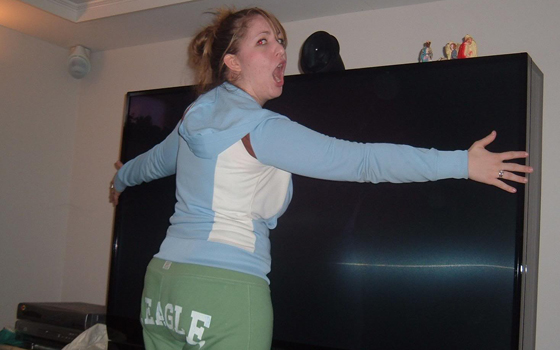 I searched Google for Dan Rather and got this. What? Why? Fuck you, Google Image Search!

I don’t think anyone can think of ’90s music for very long without having R.E.M. cross their mind.  College’s secret in ’80s became everyone’s favorite in the ’90s.  And this song, named for something two guys kept saying to Dan Rather while they kicked his ass in 1986, is a good example of why they endure as one of the most important bands of that decade.

I don’t usually try to ‘figure out’ song lyrics.  That’s generally because I’m ‘stupid’ and ‘lazy’.  But in this instance I was always interested in what Uncle Fester’s nephew Michael Stipe was saying.  I guess partly because I could understand them but mostly because of this line: “Withdrawal in disgust is not the same as apathy.”  The line is not original to the song (look up the movie Slackers) but it always struck me as a way to sound cool while still being apathetic.  It didn’t really catch on when I tried to make it into a cheer, but it’s still a clever line.  So I looked up what the song is about and found that supposedly Stipe said:

I wrote that protagonist as a guy who’s desperately trying to understand what motivates the younger generation, who has gone to great lengths to try and figure them out, and at the end of the song it’s completely fucking bogus. He got nowhere.

So wait, I wondered what the song is about and when I finally find out it is about someone who wanted to find something out but failed?  I totally kick the guy in the song’s ASS!  And why would he need to try to “figure out” the younger generation?  Does he mean people who came of age in the ’90s?  For real?  What’s to figure out?  Here is Generation X in a nutshell my poor befuddled song protagonist.

What’s the frequency, Kenneth?” is your Benzedrine, uh-huh
I was brain-dead, locked out, numb, not up to speed
I thought I’d pegged you an idiot’s dream
Tunnel vision from the outsider’s screen
I never understood the frequency, uh-huh
You wore our expectations like an armored suit, uh-huh

I’d studied your cartoons, radio, music, TV, movies, magazines
Richard said, “Withdrawal in disgust is not the same as apathy”
A smile like the cartoon, tooth for a tooth
You said that irony was the shackles of youth
You wore a shirt of violent green, uh-huh
I never understood the frequency, uh-huh