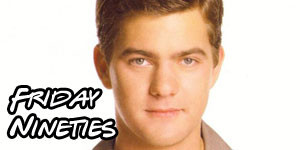 So now that we are on year six of Friday Nineties and I have, for the first time in five years, not panicked like a freak trying to figure out which song to do.  It’s strangely worrisome.  Or at least it was until I panicked because I didn’t know what the hell else to do.  It’s like I have Stockholm Syndrome.  But hey, if those girls could get away from those creepy dudes in Cleveland then I can do this.  So….let’s feel old!

The first episode of the Drew Carey show premiered in 1995 – 20 years ago.  TWENTY!  Also, look how many people from that damn show are still working!  And my gah the size of the monitors!

Here’s Hillary Clinton at the very moment she thought: “In 20 years I am so gonna be the nominee.”

I love Chris Pratt as much as everyone else, but he was 14 when the original Jurassic Park came out (1993) and his new version is NOT going to be better.  Seriously except for the dumb computers (again) this movie looks like they made it yesterday.

In sports, Atlanta wasted the best pitching staff that ever existed and only won one World Series.  HOW CAN THAT BE? Also, everyone took steroids…. In football, the AFC sucked for the entire decade until John Elway’s giant teeth got fed up and won two to make up for being humiliated earlier in the decade.  On a personal note, their 55-10 loss to the Niners officially became the worst beating ever which eased the pain of my ’85 Pats demolishing.  Oh, and I am pretty sure in the NBA the Bulls won the championship every year in the ’90s.  Yeah, that sounds right.

Oh, and the 1996 Olympics might be best known for being blown up but the most important thing that actually happened was during the opening ceremonies.  I watched it live and I cried and if you didn’t you are a monster (or George Foreman).  I don’t want to know what is going to happen to the world when Ali dies.

At least there weren’t any dumb computers in the Olympics.  But since they seem to be a theme of the entire decade, let’s show you what things were like.

Two thousand three hundred and ninety eight dollars for a 33 MHz processor and 1 MB of RAM. Seriously every time you see some kid who invents something on the Internet, punch them and remind them that their coffee maker has a better computer than you did.

ALL THE WAY TO TWO MEGABYTES!

I don’t even know what this did. You needed another program to search your…programs? What?

So to recap: the ’90s rules except for the computers and I am pretty much feeling like I won’t panic anymore when it’s time to write the column.  I would feel too guilty considering that my computer doesn’t suck…