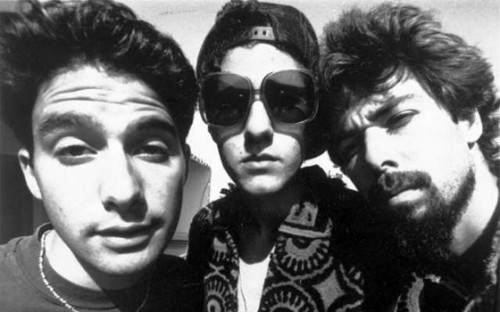 I have been writing Friday 90s since February 5th, 2010.  Today is the first time it has been no fun.  If I didn’t have to stick with 90’s I would have posted Paul Revere

M.C.A. was with it and he’s my ace
So I grabbed the piano player and I punched him in the face
The piano player’s out, the music stopped
His boy had beef, and he got dropped
Mike D. grabbed the money, M.C.A. snatched the gold
I grabbed two girlies and a beer that’s cold..

Nobody thought they were geniuses when License to Ill came out.  I remember my brother had the album and the tail of the plane said “EATME” if you looked at it in the mirror (GOLD).  But as the years went by people realized that they really were geniuses.  I don’t usually relate to famous people because I am a bitter monster, but I feel really bad for Mike D and Ad-Rock.  Also I couldn’t pick which song to use do I just used all three.  Whatever.  Guy died.  I’ll probably post a bunch of episodes of Saved by the Bell when Principal Belding dies, too.  I do have a heart.

Listen to all the songs.  Then console me.