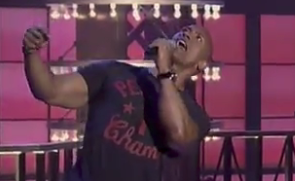 The early ’90s were one of the worst times in the history of the WWE.  I mean, they could at least still call themselves the WWF but other than that it was a big horror show.  I remember having am SNES game that featured:

Sad.  So so so sad.  But little did anybody know that within the next 5 years, they would find their salvation and rule the late ’90s and a big chunk of the 2000s in the form of Stone Cold Steve Austin and The Rock.  That Rock, the one up there with the fanny pack.  That pic is from 1996.  This match, which is from Wrestlemania 15, shows the two of them in one of the first of what would prove to be MANY amazing matches.  Oh, and ignore the timestamp on the video.  No way could they g0 46 minutes.  I think the person who uploaded it doubled it up so the copyright algorithm wouldn’t notice it.  I hate to think what Vince McMahon does to people who steal his video.  Erg.  He probably sends the ghost of King Kong Bundy to rape your face.  And not in one of its pre-existing holes!!!

But why am I talking about The Rock at all?  Well, you can see that atrocious 90s pic up there, and he was born in 1972 which means he is Gen X baby.  AND you can see, beyond a shadow of a doubt (real fans will get that) the charisma he showed way back then DID translate into success later in life.  Stone Cold’s did, too, but not at the same level.  I mean, being the host of Broken Skull Ranch is pretty good, Stone Cold but The Great One might have a leg up right now.

Oh, and because he did this last night.  Dude is a giant, and he lip syncs like a champ.  And HE DID THE GIGGLE.  Seriously – look.  The giggle.  He did the GIGGLE!