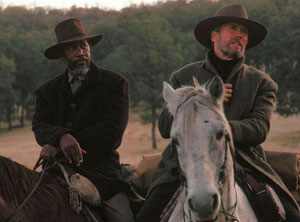 Some of you may remember Clint Eastwood as the crazy old man from the 2012 Republican Convention.  Some of you might think of him as Dirty Harry.  Maybe the Man with No Name from The Good the Bad and the Ugly is your fave image of Clint.  But not me.  Mine is a toss up between Escape from Alcatraz, Bronco Billy, Every Which Was but Loose and Unforgiven.

Younger people seem to like Gran Torino but I know enough crabby old guys so that I can appreciate the movie but not love it.  Oh, and while we are on this trip down memory lane, if you have never seen Thunderbolt and Lightfoot check it out.  It’s Clint and a VERY young Jeff Bridges.  But stop distracting me with this Filmography of Clint.  We need to talk about Unforgiven.  I saw it in the theater, of course.  Kids see every movie in the theater.  I am still trying to figure out why I saw Tin Men in the theater.  I wouldn’t even watch it now if it was on.

OK, so, Unforgiven.  This is Clint’s Oscar movie.  You see, when you are old and have been in a million movies and you haven’t won an Oscar yet you usually get one.  They gave it to Paul Newman for The Color of Money and Burt Reynolds was positively banking on it for Boogie Nights.  So when Clint got his it was no surprise.  It’s a good movie, packed with stars and it didn’t have ridiculous Sandra Locke in it.

It was 23 years ago but Morgan Freeman looks the same age.  How the hell old is that guy?  I might need to watch this movie again.  I forgot about Richard Harris and Gene Hackman being in it.  I don’t generally like Westerns but I seem to remember this one being particularly good.  Would he have gotten the Oscar if the Academy had known that he was going to live a crazy long time and win more Oscars?  Maybe not.  So maybe that’s why Burt Reynolds got screwed.  They saw that he did well in Boogie Nights and were like: “Meh, Look at Clint, still doing stuff.  Burt has plenty of time.  Plenty!”

But Burt didn’t.  And more than 20 years later, Clint got nominated for American Sniper and Burt was thinking about that time he was in: “In the Name of the King: A Dungeon Siege Tale”

Where did I go wrong?

What’s your favorite Clint Eastwood movie?  I forgot about Kelly’s Heroes.  That was a war movie that had Donald Sutherland in it.  Sheesh he has been around forever.