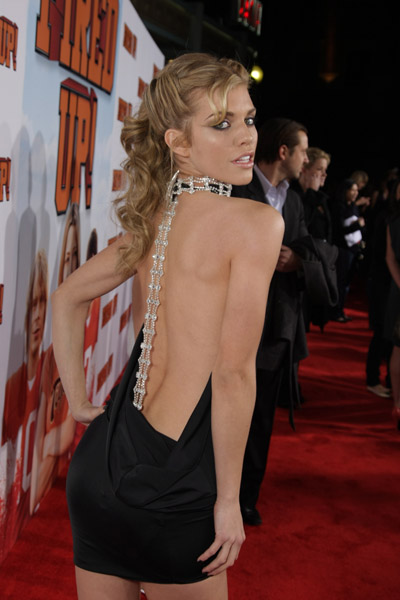 I don’t understand the point of a premiere for a movie that really ought to be straight to video–do we say straight to DVD now?  I really don’t know, but straight to video seems…wrong?  I also wonder if naming the movie “Fired Up” and then using the initials is a pre-emptive strike against all the criticism of its inherent and not accidental craptasticality.

I am also concerned about the state of her armpits and the nasty looking sore on the back of her hand.  Look here:  I realize this isn’t an A list red carpet event but she really couldn’t be bothered to shave or wax her pits?  And is that a skin tag?  I’m a bit queasy now.  It also appears someone put a cigarette out on her hand.  That’s gotta hurt.

Okay, so the dress has me puzzled.  On the one hand, it is scandalously short in a way only Heidi Klum generally can carry off.  On the other hand, it fits her well and accentuates her toned back.  On the third hand (I am now a mutant with three hands), it looks a bit like it came from Forever 21.  I need your help.

You can view all 82 pix from the premiere in her album.