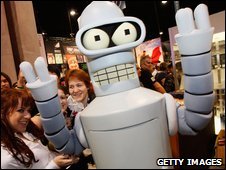 this is a dude from the show. not near intimidating as robocop

Futurama hasn’t been on the air consistently for what? Seven years? Well, Futurama is going the way of The Family Guy and will make a more than likely largely ignored return to Comedy Central in 2010.

Is this going to be a trend now with shows? Please? Let’s not just do it with animation, either. Fact, some networks fuck up in how they promote a show and it doesn’t catch on until after it has been cut. Yes, I’m getting at a need to bring Arrested Development back, but what other short lived shows would you like to see brought back?