Game of Thrones: The Climb

In the novels: Sansa has an inner monologue demonstrating she’s not just a silly twit. Samwell is on the Fist of the First Men during the White Walker attack and does release the ravens. Tywin Lannister visits Tyrion many times when he’s unconscious  Melisandre never goes to the Riverlands, never meets Thoros and doesn’t take Gendry captive. Loras is already in the Kingsguard so he can’t marry anyone. Tyrion never makes nice with his sister or confronts her about Mandon Moore (it is in fact still unknown who sent Mandon Moore). Neither Catelyn or Robb Stark ever go to Harrenhal.  Sandor Clegane doesn’t laugh like a maniac when burned but regresses to a child of six. Above all, Orell can’t cut the rope to which Jon and Ygritte are clinging because Jon already killed him in A Clash of Kings. There are pages and pages devoted to differences between the books and TV. I love it since it’s a book geek heaven, but George R.R. Martin wants you to know that he wrote the story so he gets to decide who plays in the Westeros sandbox.

“I remember reading [Dany planning to give up Drogon to the slaver] and thinking, ‘Oh, this is kind of disappointing.’ When the real plan was revealed I think I even called [Weiss]. This was before we had met with George, when we were still trying to figure out if this show was possible. The culmination of that scene was one of those moments when we were like, ‘We got to make this f–king show.’ It was very gratifying seeing that wish fulfilled … I think it will be one of the most staggering things ever put on television.”

I imagine a little ceremony with a dagger and bloodied fingers dripping on a skull when George whispered the secrets of Ice and Fire to writer-producers David Benioff and Dan Weiss. Martin is very protective of his creative copyright, he’s a strong opponent of fan fiction, but Benioff and Weiss are part of the omertà now. The truth is, George is an experienced TV writer and producer. After his fourth book (Armageddon Rag) tanked he worked on the Twilight Zone revival, Max Headroom, and Beauty and the Beast. Part of his decision to impart super secret plot points to Benioff and Weiss was based on how he felt the ending of Lost was bungled. He likes the HBO producers of Game of Thrones and is constantly defending them on his “Not a blog.” Even with all the fame and subsequent pressure on him, he has a working process and adamantly refuses to work exclusively on Game of Thrones. The result is, with six year gaps between novels, another whole group of fans is going to be eventually posting “Well that’s different than the TV version” meaning the show has more authority. George won’t care, others may come and go, but only the Longshoreman’s Son has ever completely ruled the Iron Throne. 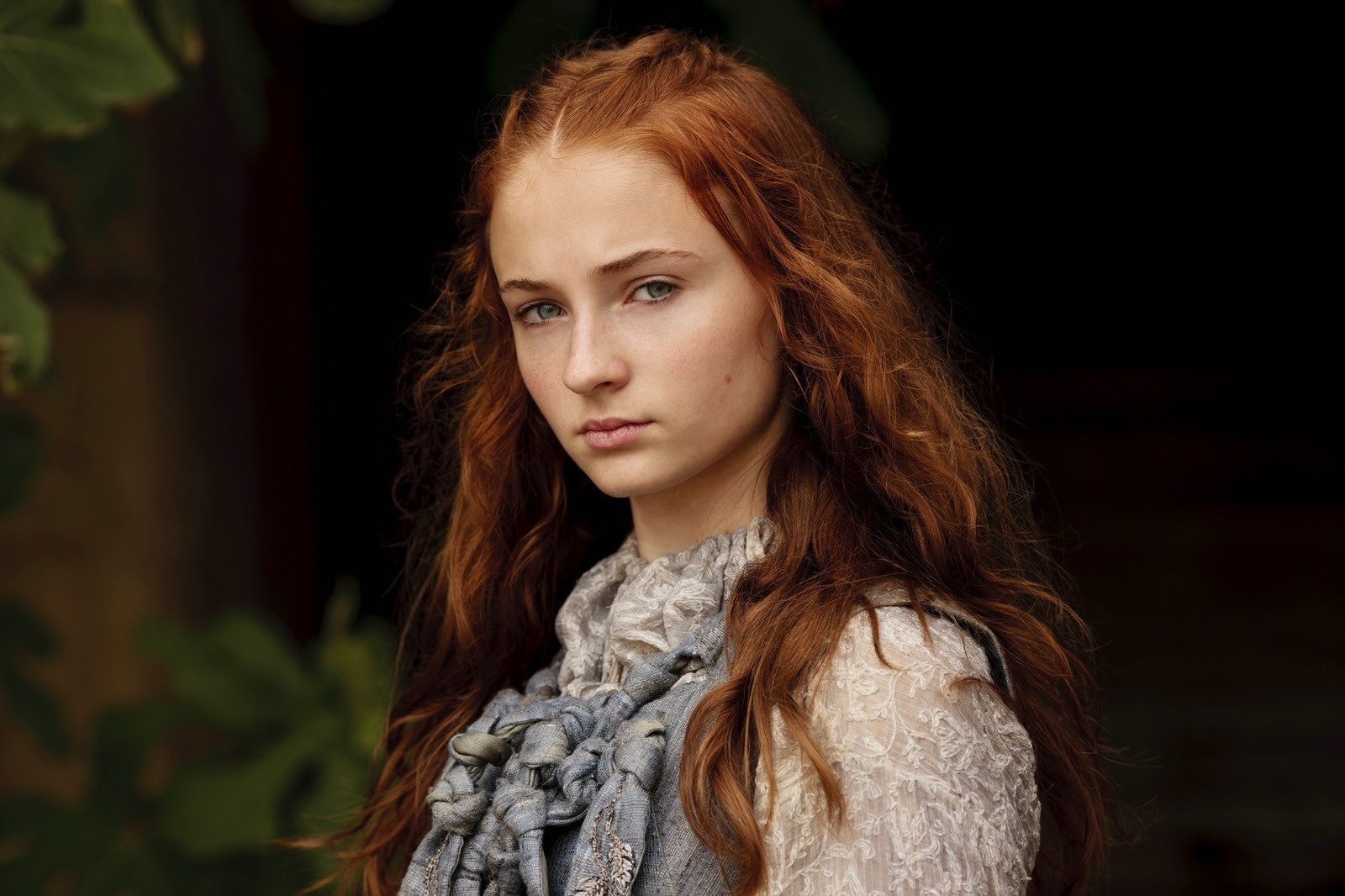 We might not be able to SEE inside Sansa’s head but it’s still tugs at the heartstrings to watch what she thinks is salvation sail away. Loras won’t be getting his fabulous gold and green brocade dream wedding. For a second I thought he might get his wish. I’ve been joking about it but the whole “let’s make everyone FABULOUS and sex things up” is getting a bit much. With the addition of Abbywinters star Kylie Hi there are now four Game of Throne actresses who can be found in x-rated action on the internet. Rose Leslie, who as Ygritte is smoking hot naked and wiggling, just seems wrong when her lines have her speaking like a ten dollar crack whore. The same with hints that Kit Harrington might be gay and has a nude clause in his contract (because of an injury, a body double was used for Kit in the recent steamy sex scenes between Jon and Ygritte).   Then again the alternative, as Ramsay Bolton slowly peels the skin of Theon Greyjoy’s finger, is worse. He’s in for more torture if they follow the books but if I’m given the choice I’d rather see more softcore than snuff.

Of course Joffrey proving his crossbow isn’t limp is just good royal fun in Westeros. Poor Ros proves that it just doesn’t pay to be little people in this neck of the woods. Did anyone else notice the visual symmetry between Ayra’s archery scene and Joffrey’s? I sure hope she gets some translation of the inner dialog or else we’re going to think she’s a wicked little freak too. Wait! She is a wicked little freak just not one like Joffrey. 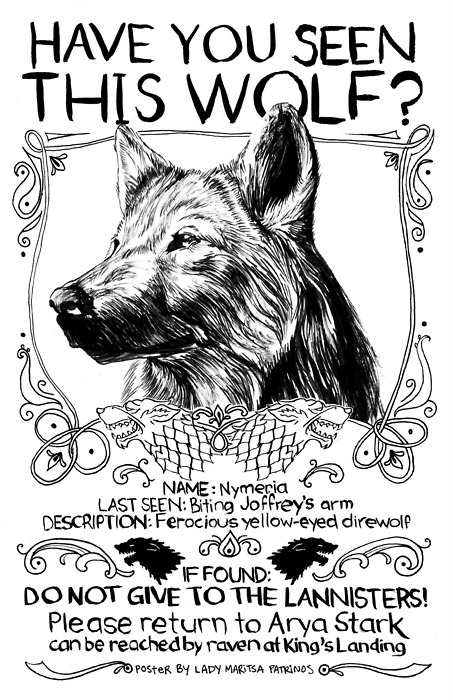 All the chaos is a ladder for schemers like Littlefinger but for almost everyone else it’s a struggle. Ayra has become a feral Stark filled with so much hate she recites a litany, “prayer,” of those who need to die. Valar Morghulis already and she’s yet to visit the House of Black and White. Just when we’ve settled into this little puddle of nasty, Melisandre shows up to drag Gendry away. It just doesn’t pay to be a bastard of Robert Baratheon. If the Lannisters aren’t strangling you in your crib then Melisandre is wanting to burn you alive to make the Lord of Light happy. I’m sure Edric Storm is quite happy to have been written out of the TV show.

It just doesn’t happen in the books. No way, no how, is Gendry sold for a couple of bags of gold and brownie points with R’hllor. I would love to know just how much tinkering George Martin had to do with this. It feels like a retcon of the Ayra character by the author himself. In the books there’s no real reason for her to run away from the Brotherhood and her impulsive flight seems flawed. Sure they were going to ransom her to Robb but that would have been a return to the safety of house and family. With the revision she has a reason; The Brotherhood betrayed Gendry so there is no temptation for Ayra to stay and play Robin Hood with Thoros as a zombie-raising Friar Tuck.

Things fall apart; the centre cannot hold;
Mere anarchy is loosed upon the world,
The blood-dimmed tide is loosed, and everywhere
The ceremony of innocence is drowned;
The best lack all conviction, while the worst
Are full of passionate intensity. – William Butler Yeats

Meanwhile House Frey, the Westeros version of the Adams family, is planning a wedding. What makes me think, aside from having the prescience of being able to read, that Lord Walder Frey’s wedding plans have nothing to do with a fabulous green and gold brocade wedding dress? More disaster and betrayal to the south in Harrenhal. Lord Roose Bolton has played the Jaime card by agreeing to send him back to King’s Landing. Ever a kinky bastard, Bolton has managed to get Brienne into a dress and given one handed Jaime a knife and fork to eat his meat with. If Ramsay, the real Bolton bastard, had been there he could have laid down a heavy beat with his horn and shouted that classic line from Pink Flloyd’s The Wall.

On our way north to the wall the camera pauses on another small party. Osha and Meera argue about skinning rabbits, Jojen has a vision, Bran begs everyone to get along, Hodor says “Hodor?” and most of the audience wonders who the curly haired kid is. Art Parkinson, who plays the youngest Stark, has been getting so little  air time that it’s become a running joke among Game of Thrones fans. There’s even a Tumblr that asks “Where’s Rickon?” My favorite is that he’s been sent to the Milford School with Tommen and Myrcella Baratheon (that’s the school from Arrested Development where children are “neither seen nor heard”). Readers have also been asking the same thing since Rickon wandered off with Osha in a Clash of Kings. If you didn’t have a sharp eye you missed  the one paragraph in Dance with Dragons where the Onion Knight is sent to fetch him. So the next time Bran asks Osha “Where’s Rickon?” you can explain the hilarious joke and earn total nerd cred.

On top of the wall Glenn and Maggie make love in the watch tower surrounded by Zombies. That’s not what happened? Well hell it should have. Kit Harrington, who shares a theatrical background and posh ancestry with his co-star Rose Leslie, is just acting like a turnip whenever Rose takes off her fur panties. Is Kit gay? I don’t care. It’s called acting for a reason, so summon some enthusiasm for the scenes, Kit. I feel bad for not connecting with Jon Snow since I liked him so much in the books but he’s almost as lost as Rickon on TV so there’s not much of a chance to like or dislike what’s going on.

Oh the heck with it Lady Olenna Tyrell and Tywin Lannister went head to head in Kings Landing. Each of them plays a vicious game with Tywin playing the trump by threatening to force Loras into the Kingsguard if House Tyrell refuse Tywin’s proposal to marry him to Cersei (in the books he’s already in the Kingsguard). Sansa, who’s finally figuring out she’s a walking set of ovaries, is sold to Tyrion who is stuck trying to explain it’s not his fault in front of Shae his lady love. That snapped pen isn’t a concession, Tywin, it’s a declaration of no quarter so you’d better watch your back.

Varys got outplayed and so did Lady Olenna but you get the feeling that neither Littlefinger or Tywin understand what riding the wave of chaos is actually about. You do what you have to do and if you’re left standing at the end then you’re a winner. Only four more episodes are left so there are invariably going to be more loose ends to tie up in Season Four but don’t put away your tally sheet yet. At least wait for the big fun Frey wedding. I don’t like the way they’ve just seemed to cut and paste huge chunks of the plot but since the “current news”section of George R.R. Martin’s website still is proudly announcing that book Five has just been completed it’s obvious that I’m not supposed to care about that much anymore so I won’t. I think I’ll go make sure my suit has been pressed for Edmures wedding. I wouldn’t want to miss it for the world.

READ: Game of Thrones: And Now His Watch is Ended