Game of Thrones: The Rains of Castamere If you thought there’d be a happy ending you haven’t been paying attention. The world is utterly unfair; Ned Stark died from too much honor, Rob Stark died from too little honor, Walder Frey will likely die in bed and there will always be a sadist like Ramsay Bolton to tell us we’re not paying attention while skinning us alive. George RR Martin never gives us a Hollywood ending. When frightened people run around with sharp weapons someone dies. Anything else is just a lie.


You can’t build a plot out of jokes. You need tragic relief. And you need to let people know that when a lot of frightened people are running around with edged weaponry, there are deaths. Stupid deaths usually. I’m not writing The A-Team – if there’s a fight going on, people will get hurt. Not letting this happen would be a betrayal. – Terry Pratchett

There’s a popular joke going around that George RR Martin can’t use twitter because he’s killed all 140 of the characters. The truth is he doesn’t even come close to some of the savage real tales of history. After his forced abdication the political enemies of Edward II took care of their embarrassment by shoving a red hot poker up his anus. Richard III bricked two child princes, one of them the rightful heir, up in a staircase of the Tower of London. George, Duke of Clarence, who is famous for being drowned in a butt of Malmsey wine, is not even unique, as several other European princes chose that exact same means of execution (Malmsy is a potent (20 percent alcohol) version of Madeira). Even the Red Wedding itself was inspired by two historical events in Scotland: The Black Dinner and the Massacre of Glencoe. 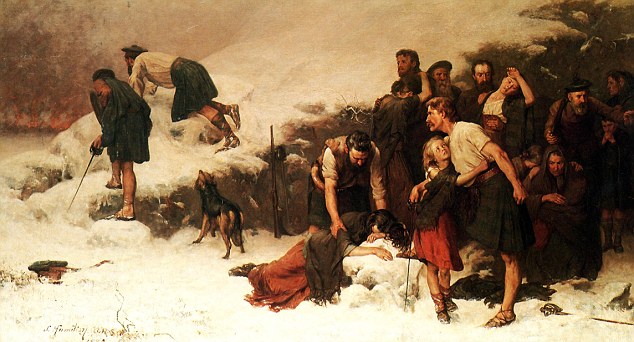 Returning to the Highlands after the Jacobite Uprising, some members of the MacDonald Clan raided the estate of Robert Campbell. Already under considerable gambling debts, the loss of his livestock forced Campbell to take an army commission to cover the loss. With this personal grudge against the MacDonalds now, Captain Campbell was the perfect tool of Master of the Stair John Dalrymple, who was seeking a means of breaking the Highland clans. Using the excuse that the MacDonalds had yet to pledge allegiance to the English King William, an order was issued to exterminate them “root and stem.” In the early morning hours of February 13, 1692 forces under the command of Captain Robert Campbell fell upon the Macdonalds, killing thirty-eight men and forcing a further forty women and children into the teeth of a blizzard to die of exposure. This was considered a “Slaughter under trust” by Scottish law, since the Campbells had been guests for two weeks under the traditional rules of Highland hospitality. The night before the massacre they’d played cards with their hosts, wished them a good night, then cut their throats as they lay sleeping. To this day in Glencoe, the popular Clachaig Inn bars entry to Campbells as men without honor. It’s easy to replace Campbell with Frey, MacDonald with Stark and think of the Master of the Stair as the Hand of the King. 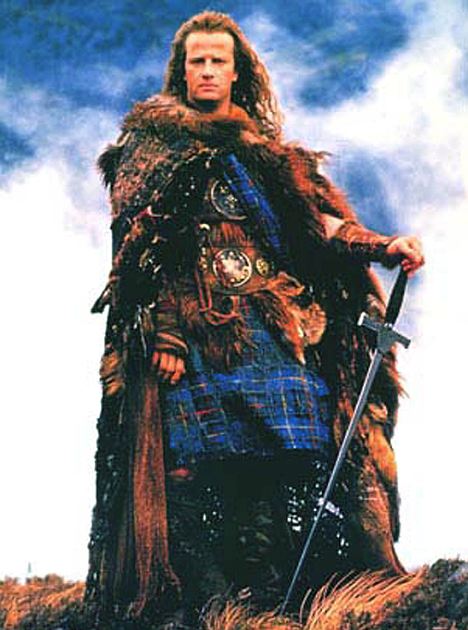 There can be only one Highlander.

In 1440 the ten year old King of Scotland, James II, invited the new Earl of Douglas and his little brother to dinner at Edinburgh Castle. Sir William Chrichton, Chancellor of Scotland, feared that the Black Douglas were growing too powerful even though the Earl was only sixteen. The three boys had a marvelous dinner enjoying the food and entertainment until at the climax of the feast the head of a black bull was dropped on the table, symbolizing the death of the Black Douglas clan. The two Douglas boys were dragged outside, given a mock trial, found guilty of high treason, then beheaded. The Earl pleaded for his younger brother to be killed first so he wouldn’t be too frightened having to witness his older brother’s head rolling in the dirt. How could you even begin to write something like this? Joffrey fondling his crossbow doesn’t begin to compare.

Robb Stark was never the equal of his father. Starks should be hard to kill. Ned made the Lannisters work hard  while Robb walked trustingly into the trap set for him. It didn’t even matter that he’d broken a vow for a “pretty face.” Even Walder Frey admitted as much. So Robb is dead, but there are more Starks yet to play. Travel your eye down to the image of Sansa betrayed if you think she can’t be a wolf bitch, Arya is already well on the road to damnation and even the cubs Bran and Rickon who are lost can’t be forgotten. I’m speculating that Lady Stoneheart might appear in the next episode. Won’t that be a surprise for those who don’t read!

Was Robb’s death a lesson for Arya who came so close to a reunion with her family only to witness Grey Wind slaughtered in his kennel by the Frey’s? Valar morghulis, all men must die, but the lesson is something else entire. I think it’s something Ygritte whispers to John in Storm of Swords

I love how Rory McCann and Maisie Williams play off of one another. The relationship between the Hound and Arya is as complex as the one between Jaime and Brienne. Since Game of Thrones has gotten a reputation for being overcharged erotically it’s interesting to note the two most interesting pairings in the entire show are entirely non-sexual.

Maisie Williams out of character and proving she is not a boy.

The Hound and Arya only serve to show how bad a failure the story arc of Jon Snow has been this season. Jon gets one of the pivotal moments of his character development when he refuses to kill a horse breeder and it just falls flat. Last season the similar pivotal scene with the killing of Qhorin Halfhand was forced and wooden as well. It was a good thing for Kit Harrington that Bran was up in that tower learning to control his “powers.” HODOR, HODOR, HODOR!

I’ve always been convinced that Dany should have had an entirely separate series of books. It always seems like an abrupt change when we leap to Yunkai and the setting and themes are all different. Fortunately for me there are Dragons, their beautiful mother and lots of tough guys with swords that want to impress her. While I still half expect Daario to put on more makeup and pop up on MTV, he’s pretty handy with a sword. We get an all-too-brief brutal fight inside the city walls where Daario, Grey Worm and Jorah Mormont get to display their particular dances of death. I would lay a city at the feet of Dany even if it didn’t have much to do with the rest of the story. It’s been the big drawback of this season. There’s not enough air time for the big plot lines because all of the narrative details being crammed in. I needed to see more of Arya and would have gladly sacrificed Jon, Bran and even Dany to the editing room floor. Then even without this major gripe I’d have questioned why Sam and his wildling appeared, but hey I’m not a producer or George RR Martin and who am I to bitch about the guys who put the Red Wedding on film?

I never saw it coming. I’ve said Robb should have been harder to kill but I would have walked into the same trap. My own Walder Frey said: “I believe you’ll be surprised at the extent of our severance package.” Yes I walked away with my head still on my shoulders but it was still a big betrayal. It’s way too late to do anything when the band begins to play The Rains of Castamere or they bring out the black bull’s head.

Frey, Bolton, Lannister, they all get what they want in the slaughter of the Starks and the price they pay is only the violation of the sacred laws of hospitality. Hospitality is the glue of civilization and when Roose Bolton whispers “The Lannisters send their regards” while sliding his dagger between Robb’s ribs it’s the end of the slaughter at the feast but the beginning of the greater misery. Someday, when the land is fat and peaceful once more and it’s really just a tourist joke, there may be a sign at the Inn at the Crossroads banning all Freys but for now all hell is about to be unleashed on Westeros.

All that remains is to cut Catelyn’s throat and a fade to silent black.