Game of Thrones: Beyond the Wall 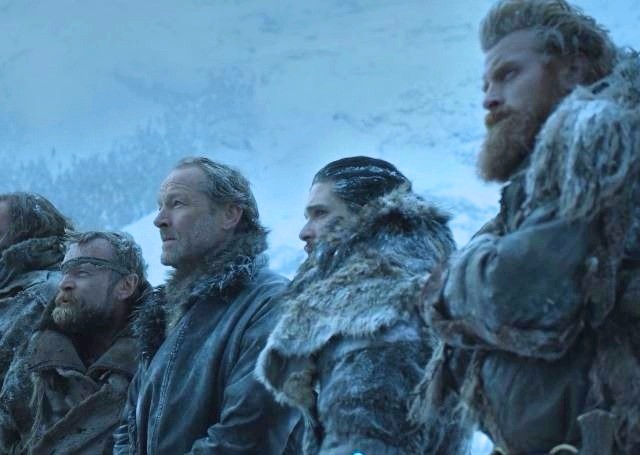 Well everyone. What about that episode? You probably only remember the Biggest Moment off the top of your heads so I’ll try to start with other things that you might have almost forgotten about. I know I did until I sat down to think about it.

Mostly we’re going to discuss events Beyond the Wall but first let’s look at the mess Littlefinger is making for the Starks, and discuss why on earth they are falling for it.

Arya and Sansa Need to Quit It

Both of them know Littlefinger is a sneak. They don’t seem to trust him. They both seem to think he might betray Sansa at any moment. So why isn’t Arya suspicious of how easy it was for her to find that note? Why are they literally playing right into his hands? It’s so frustrating. I have to admit I still love how bada$$ Arya is, and this moment was kind of great:

However, let’s not forget that Sansa has lived through terrible horrors and ladies, it’s not supposed to be a competition. Arya got almost murdered. Sansa got actually raped. They both had to watch their father beheaded (or almost watch? I think Arya’s view was blocked purposefully by a knight). How about just quit it with this nonsense and do what’s best for your people and each other. Dang it.

Ok well – while the Starks are effing up, some crazy stuff is going down north of the wall.

In the Great White North 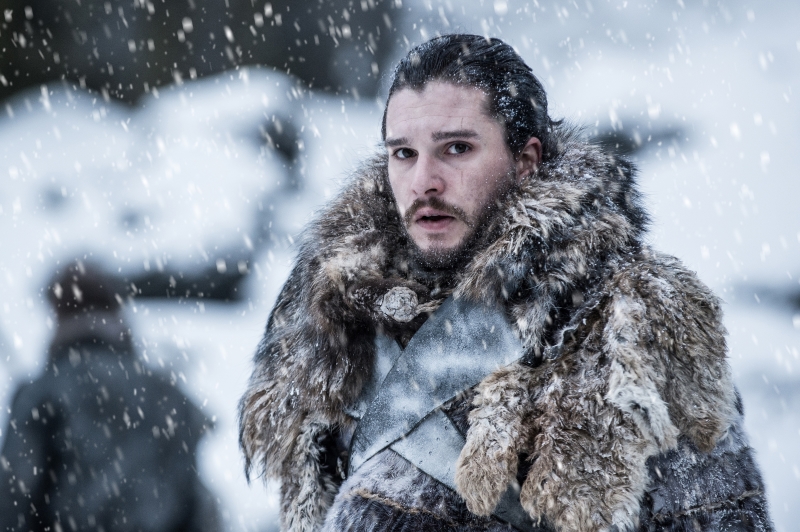 I’ve been unclear on exactly what their plan was for grabbing a wight walker / dead / zombie whatever you want to call it, and bringing it with them, and suffice it to say, apparently they had no plan at all. 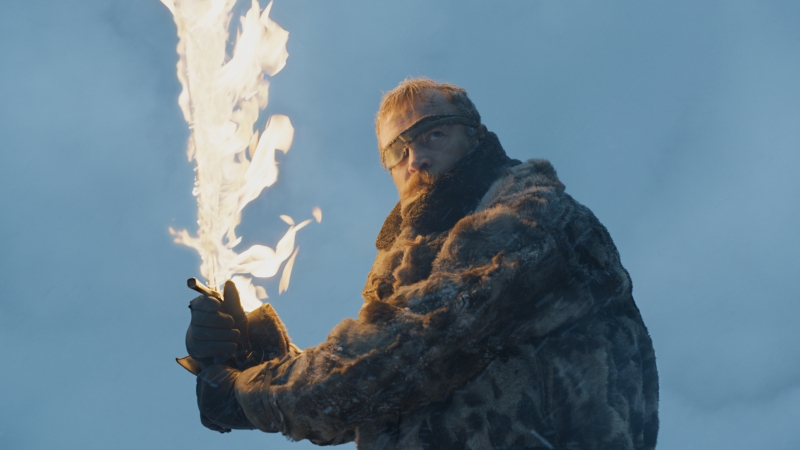 This guy with his flaming sword is kind of my favorite telling Jon basically “Listen, who knows what he [the God of Light] wants, but you’re alive so do something you whiny baby.”

First of all, zombie polar bears are a really uncool thing that exists.

I mean, this is a nightmare I never asked for. When it lept out of the storm and grabbed the Wildling equivalent of a “red shirt” (there were several on this journey) I screamed and jumped. Ha. Well played, GOT. Well played. Of course the bear delivered life-ending wounds to poor Thoros, and The Hound just stood there powerlessly watching for reasons I’m not clear on… because fire? Jorah had to jump in with his dragon glass knife and take the bear out. The flaming zombie polar bear. 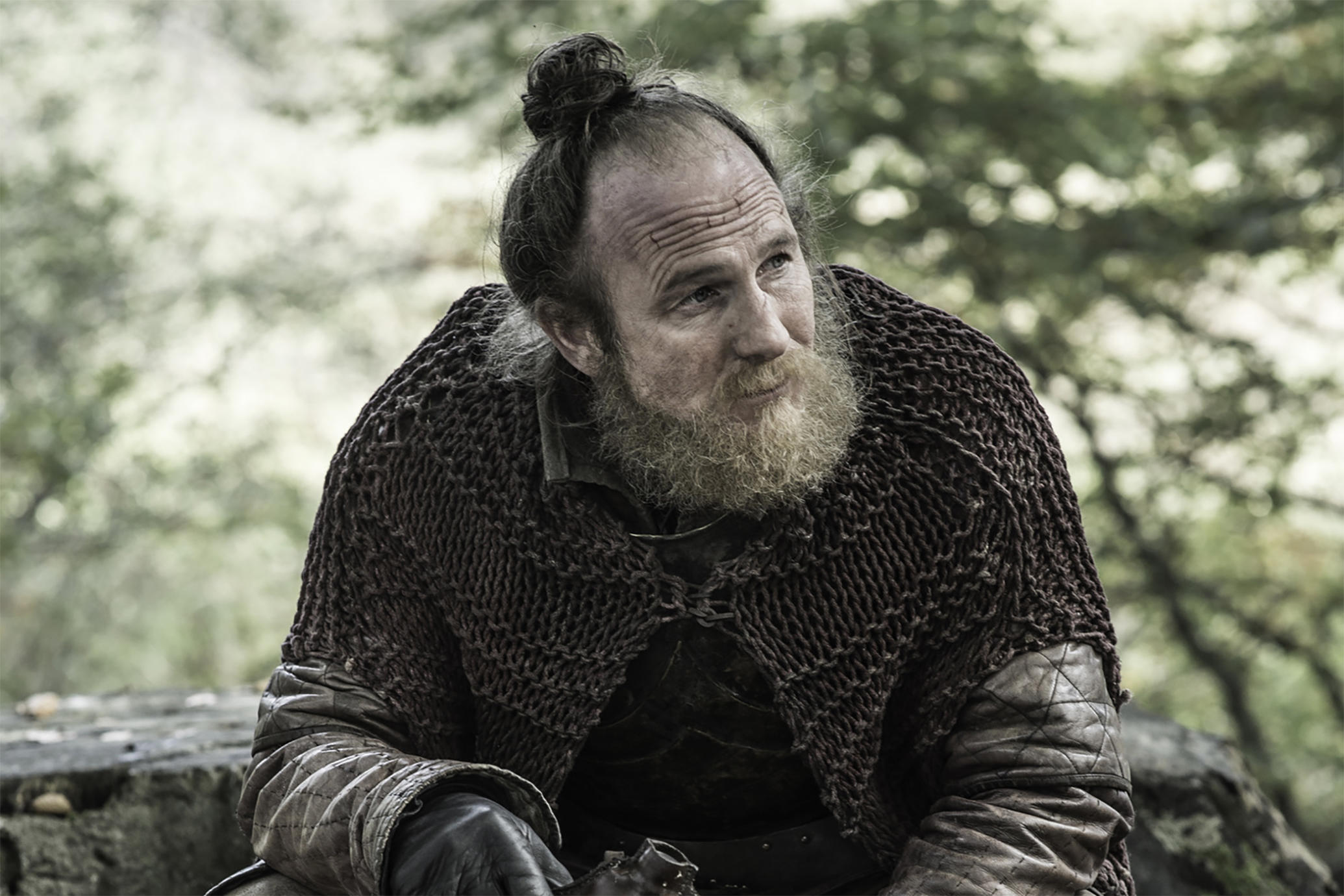 So the group’s plan, which seemed to be “hopefully we can find a stray and not have to fight the whole army”, didn’t pan out as they’d hoped. We were led to believe it almost worked but then there were problems, yes? The one they caught sure did scream its head off. And so we end up here: 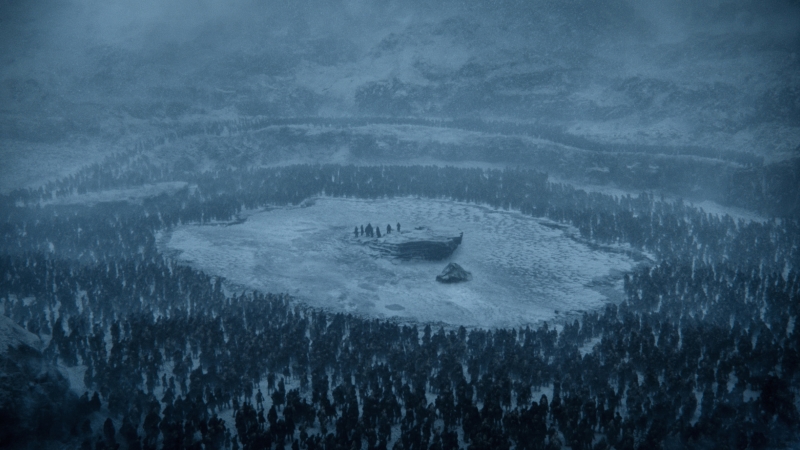 But not before Jon tells Gendry to run back to the wall and send a raven to Dragonstone telling Dany what has happened. Poor Gendry. 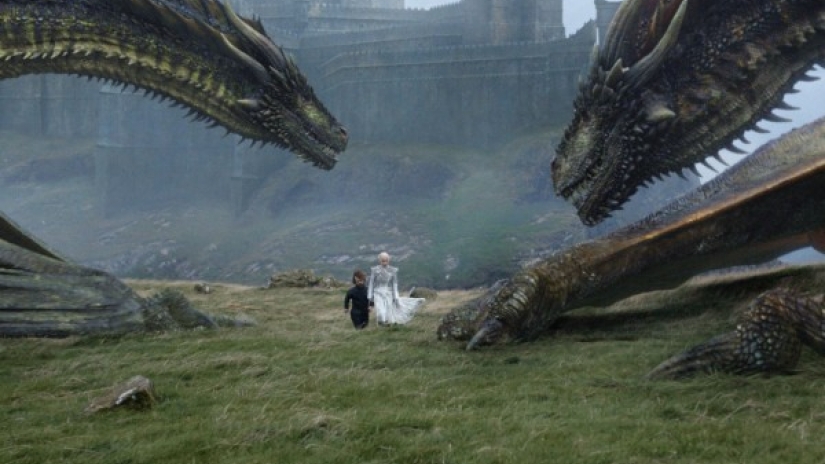 “I’m not doing nothing again.”

Several things happen while they’re stuck on the island in the middle of the frozen lake with thin ice that the zombies decided to stop taking chances on. Thoros dies, the Hound starts throwing rocks at zombies, the zombies realize the lake is refrozen and decide to attack, more red shirts die, and then – 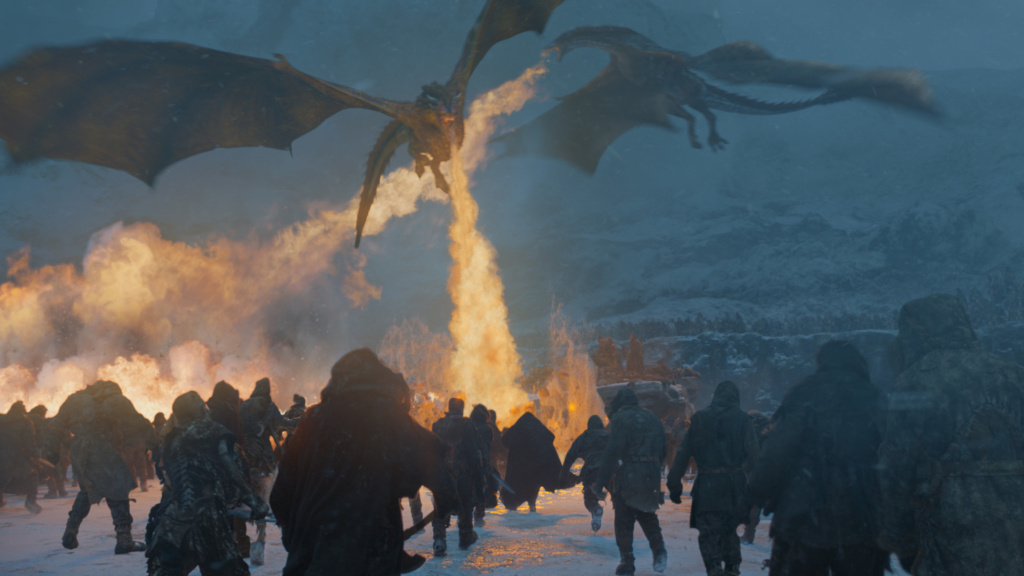 Oh thank goodness! you say, The dragons are here and everything will be okay now!

Oh you silly fools. Of course not. Of course everything isn’t going to be okay. 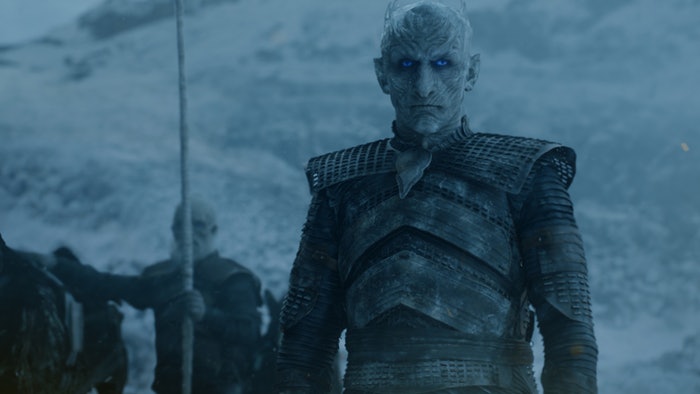 Because the Night King has a goddamn dragon-killing ice spear. Because of course. Is this entire series just an analogy for summer versus winter and all the regular humans are just playing a game while the real opponents are dragons and zombies? As soon as I saw this … Night General? Knight Prince? … handing this thing to this dude I knew a dragon was dying, I was just hoping it wouldn’t be the one Dany et al were on.

I’m not even posting any images of that because it’s still too traumatic for me. 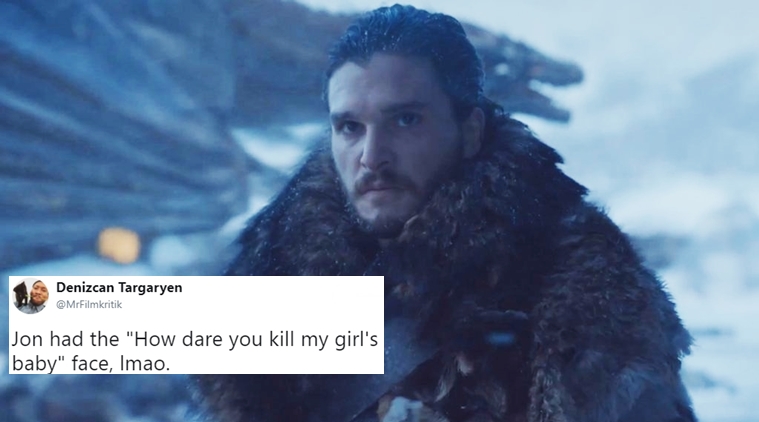 Jon is like OK, Night King, now it’s really on. You killed the wrong dragon, sport.

So of course because reasons, Dany and everyone have to fly off and leave Jon, he gets pulled under water by zombies and it doesn’t look good. However, he’s already died once, I had a feeling this wasn’t the end for him, though nobody else is very sure.

He somehow gets out, I guess zombies can’t swim (just like on The Walking Dead! What nice consistency of various zombies), and is definitely in danger of being immediately killed by the dead until Cold Hands, i.e. his Uncle Benjin, shows up and rescues him, of course sacrificing himself at the same time. 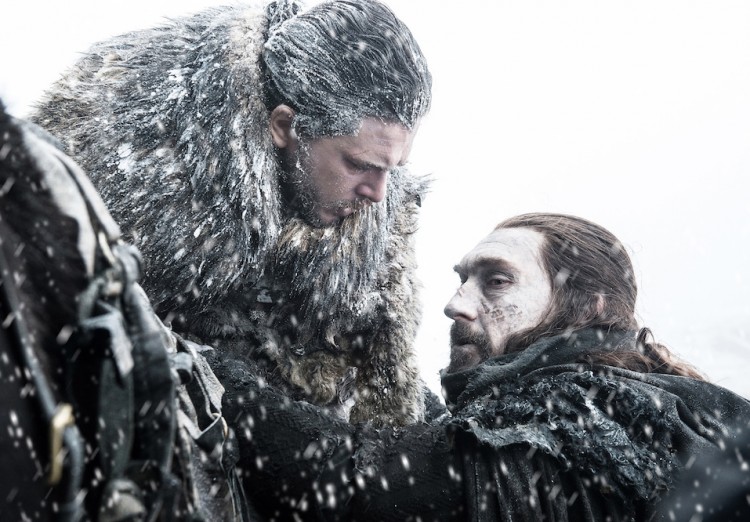 “Jon, quit your nonsense and get out of here, dummy.”

So Jon gets back to East Watch, and here is Dany’s face when she sees him riding out of the woods: 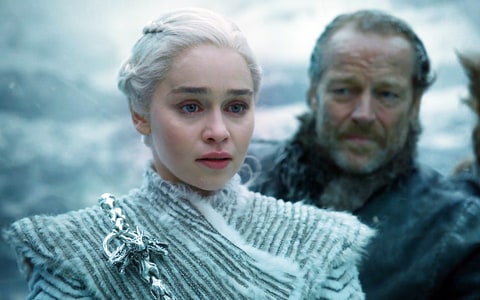 Ok guys, we get it, they’re in love. In case we didn’t get it, here is more longing eye contact – over a sickbed no less: 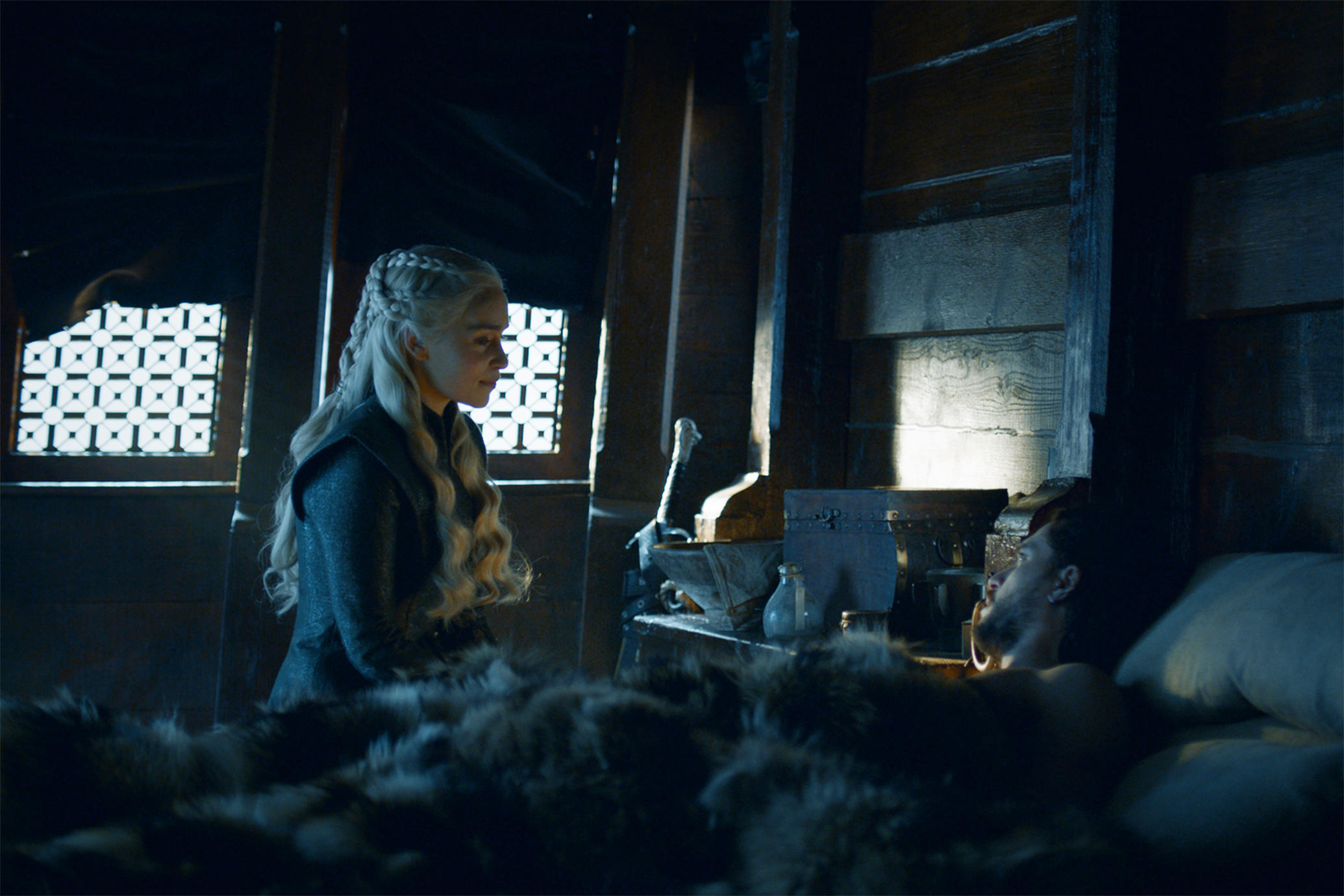 There were important moments in their conversation though. She stresses that the dragons are the only children she’ll ever have. (I won’t be having your babies, Jon, get it?) He says he will bend the knee, acknowledging her as Queen. At this point I think not only does he luuuuuuuuuurv her, he has been won over by the same things all her people have, she’s trying to do the right thing, even when waging war and making brutal decisions. She and Jon both want what’s good for the people of Westeros, unlike those evil Lannisters.

And I can’t even really bear to discuss what is probably the biggest and worst moment of the show. The bad guys have a dragon now. 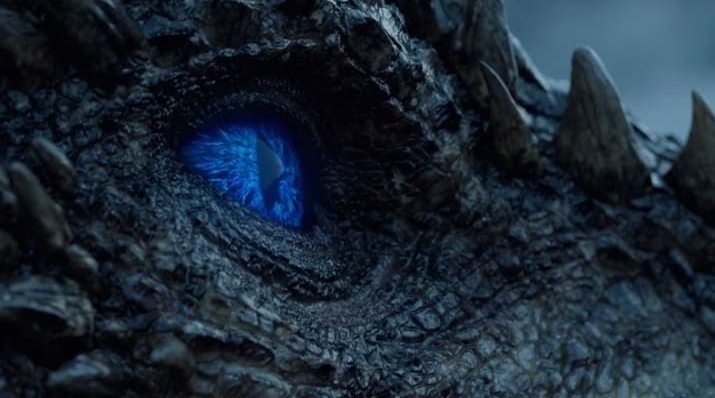 I’m very worked up about the season finale next week. Here is the trailer for it:

Filed under: beyond the wall, dragons, episode 6, night king, season 7