Game of Thrones: Blood of My Blood

First of all, my obviously favorite moment of the whole show was Mother of Dragons of course. I can’t help it. But that comes at the end and is really just a bunch of showboating. So here is a reminder of how awesome she is and then on to the more important storylines and reveals this week. (There is some talk of her “becoming a villain” but I don’t buy it. She’s just a BAMF, get on board, interwebz. Stop calling women names for being assertive and having dragons and whatnot. Sexists.)

Honestly I don’t remember the order or everything that  happened but I’ll do my best.

First of all, Bran sees a whole bunch of stuff in his visions while Meera is dragging him through the woods trying to escape the great army of the undead. Here is a detailed breakdown of all of it but I did catch the Mad King (Dany’s father, the king Jamie “Kingslayer” Lannister killed) screaming to “burn them all”! 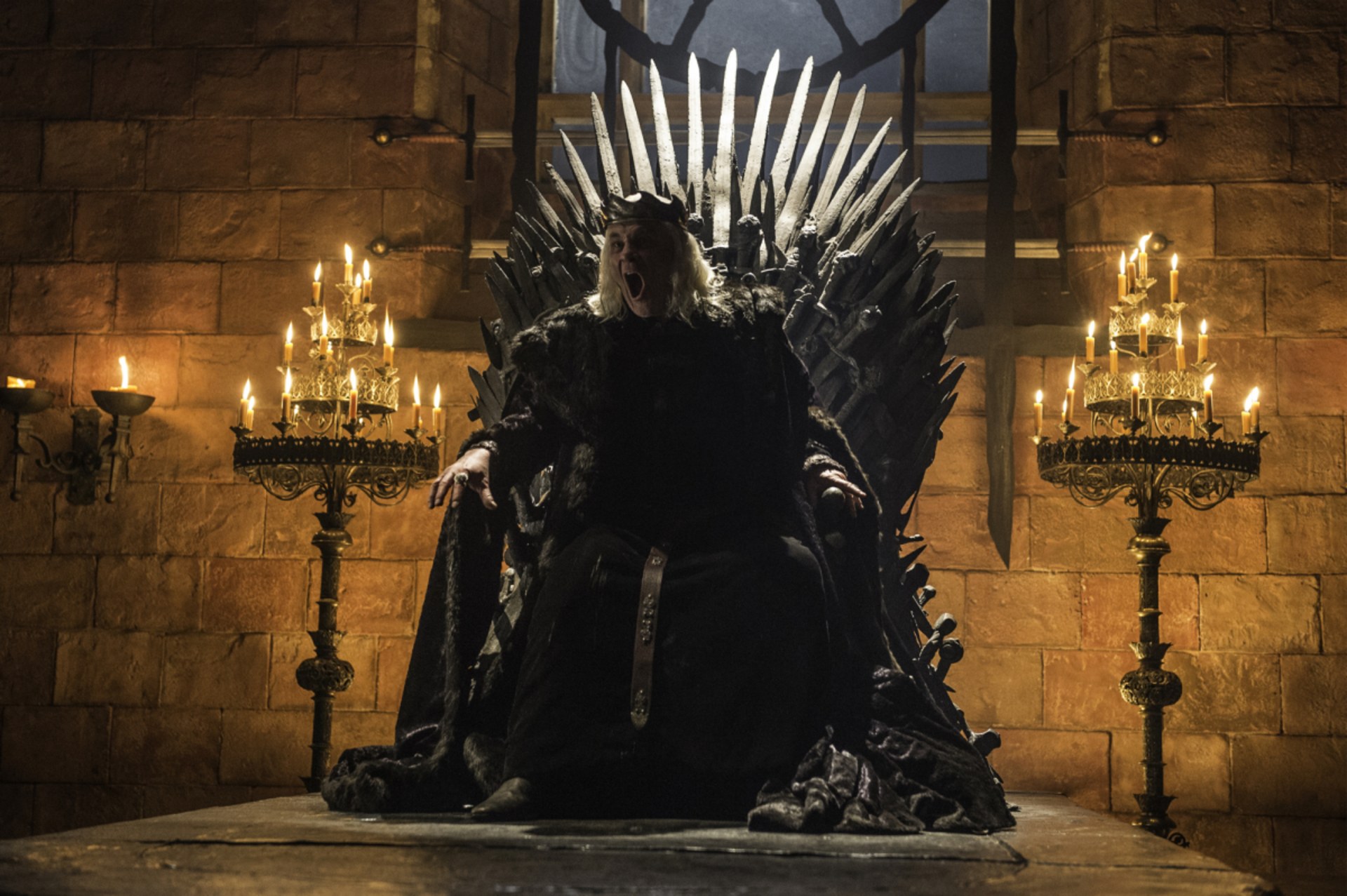 But mostly I was concerned with how on earth they were going to get away and I was thinking “clearly something needs to happen, or someone needs to show up” when in fact, someone did. 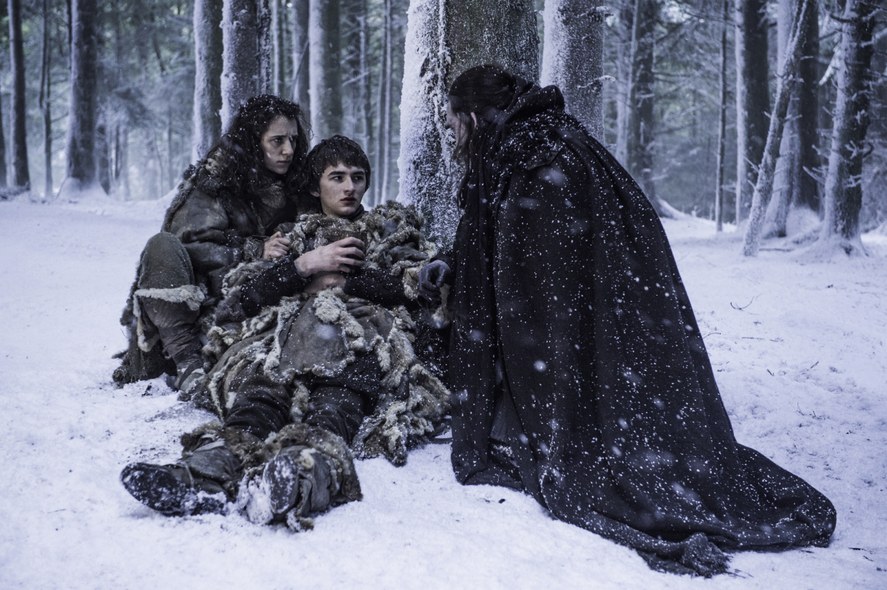 As soon as I saw his face and identity were hidden I had a feeling it would be Benjin. Bran’s long-lost uncle showing up was perfect and I felt super smart for guessing it was him. I actually don’t even know why it occurred to me. I think maybe there have been hints all along that Benjin wasn’t definitely dead because no one had seen him and so maybe he was due for a reappearance. 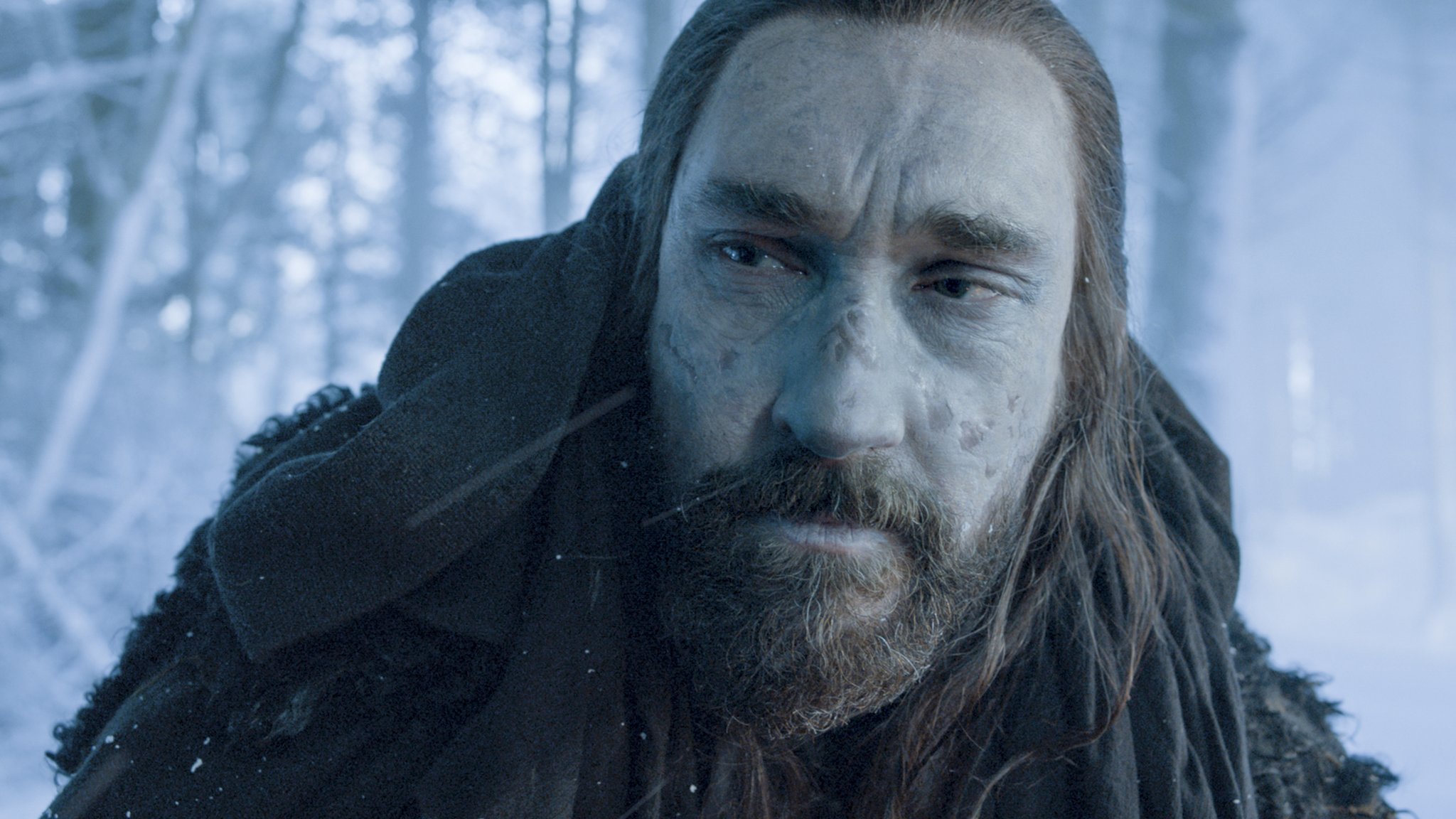 Of course, he doesn’t look quite right does he? Don’t worry, “The Children”, whom I prefer to call the “weird wood nymphs” apparently saved him from becoming a white walker (zombie) by stabbing him in the heart with dragon glass. Dragon glass apparently creates white walkers, kills white walkers, and stops their plague in its tracks in an afflicted party. Cool. I could use some of this stuff. Get to work, science.

I kind of like that Benjin showed up. The Stark kids are all severely lacking family ties lately. I was happy when Sansa and Jon were reunited. It was nice for Bran to get someone too.

I really can’t quite figure out what’s going on with her, how many different ways she’s playing people, but I always assume she is based on past experience. She seems to be able to do it while still in some moments appearing genuinely good/sweet. For instance I believe she really cares about her brother and family, and even has a soft spot for stupid naive Tommen. But she still is gonna do what she needs to do. 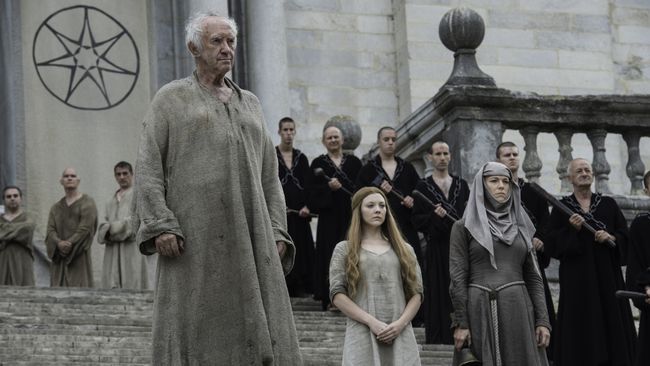 Other than not having to do a walk of atonement I don’t completely understand her game here in getting Tommen to unite with the Sparrow and forbid the fight his dad/uncle Jamie tries to bring to the gates of the faithful. I’m mostly disappointed about that because I wanted to see Margaery’s grandmother, apparently known as the Queen of Thorns, get the better of these religious zealouts. Grrrr. But I’ll assume Margaery has it figured out somehow.

To be honest I don’t completely get what’s going on here. Apparently the Tullys and the Freys are constantly fighting or something. It was Walter Frey who killed everyone at The Red Wedding (by the way, I was informed that it was the 3 year anniversary of that event airing on TV today – 3 years, can you believe it? Look for links about this at the bottom.) Here is a useful rundown. For now I’m just taking in that Sansa, Jon, and Brienne are headed there as is Jamie Lannister.

Sam and Gilly arrive at Sam’s home. I’m relieved to see that his mother and sister are sweet as can be and happy to welcome them home. Of course we know his father is awful but still, this dinner party was probably even more awkward than your last family gathering after your cousin with the fundamentalist parents came out to everyone at dinner. 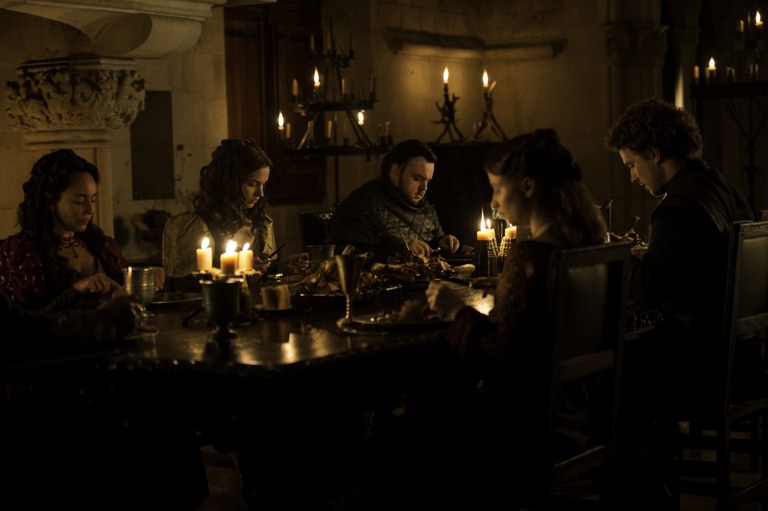 First idea was Gilly pretends she’s not a Wildling (even though she clearly doesn’t know how to, like, use silverware), Sam leaves her there in safety and relative comfort, and goes off to study. Revised plan, Gilly defends Sam at dinner, calling him a hero, getting laughed at for bringing up White Walkers, revealed as a Wildling, and Sam decides they’re all leaving together. Better yet, he takes his father’s Valyrian steel sword, Heartsbane. Sam, you are scared as can be but you always stand up for folks and do brave things. You’re one of my favorites. 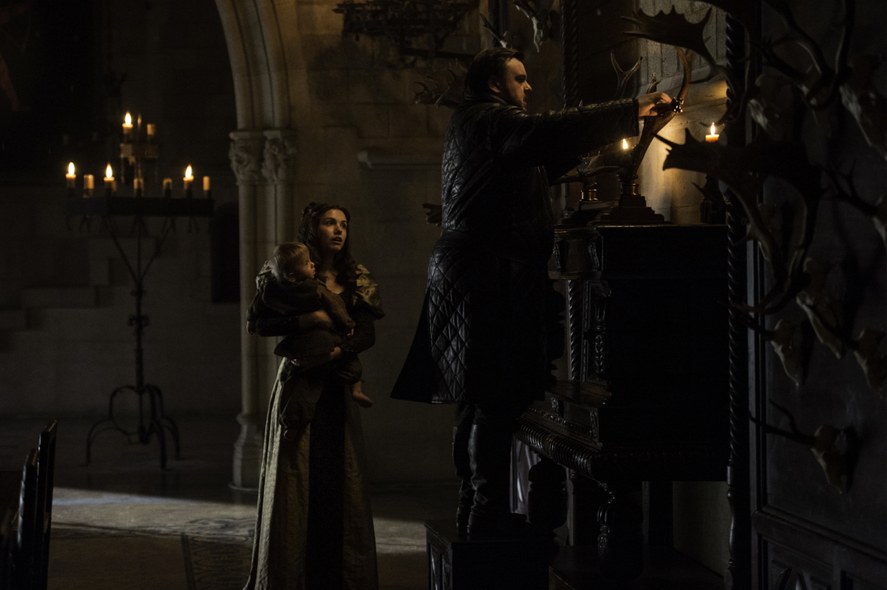 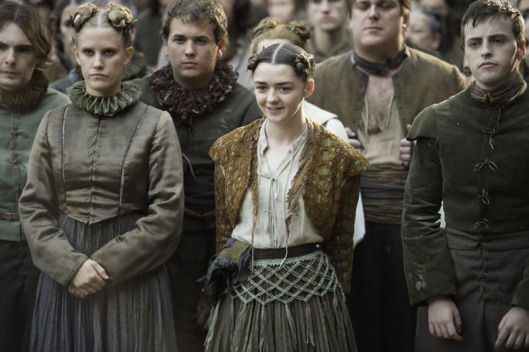 Arya gets to laugh at Geoffrey’s death, which is kind of great. She also decides she’s done with this stupid murder cult I guess, now that they’ve taught her to…. I don’t know, fight with a stick as a blind girl? It was interesting to have it confirmed that there’s nothing magical or ethical about them, they’re just assassins for hire. 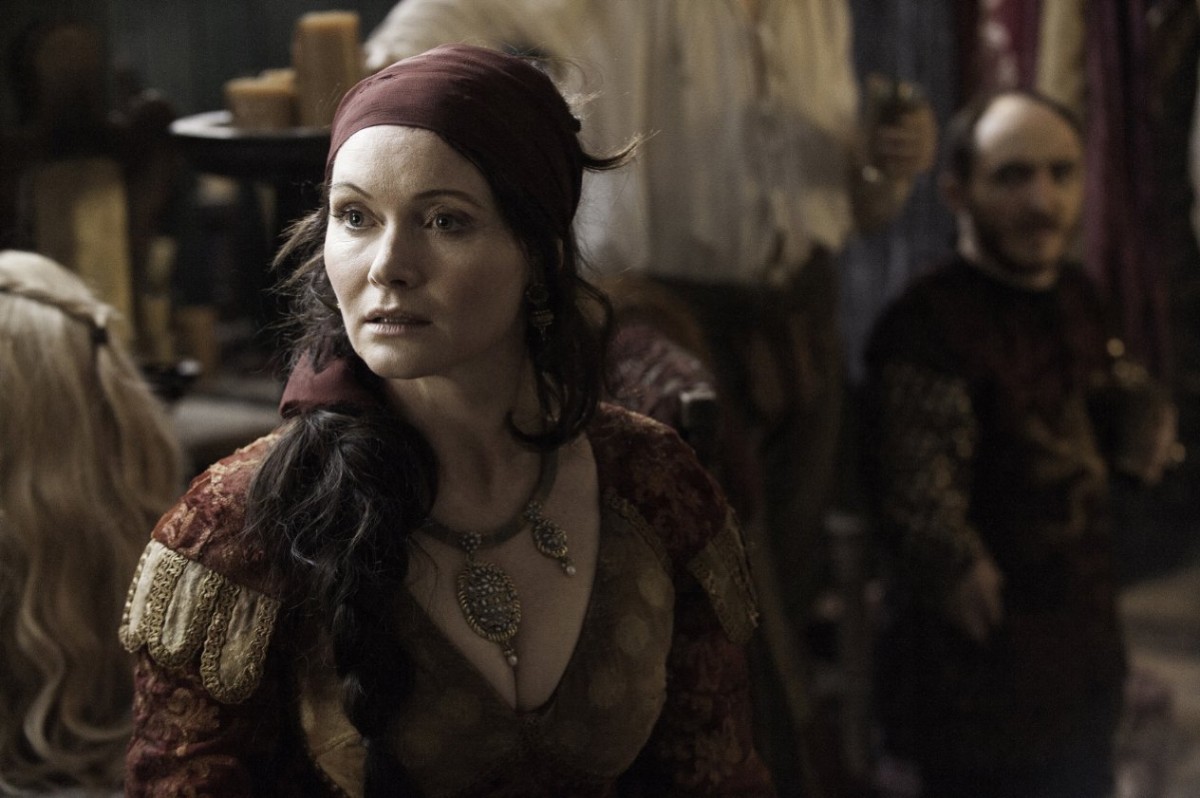 And she likes the woman she’s supposed to kill, so she saves her and reveals who was trying to have her killed, then prepares for her pending attack by digging her sword out of its hiding place. I can’t wait to see her kick that bratty girl’s butt in a real fight. I would use the other girl’s name but I can’t because a girl has no name.

It seems like a setup for some big things next week so I’m pretty excited to see what happens. I want to see what’s going on with Sansa, Yara, Tyrion, and, even though I’m scared to see, Rickon.

Finally, here is another great rundown of the major plot points this week on Imgur, by the same person I posted about last week.

And, as promised, about the Red Wedding – which aired three years ago today.

Here is a compilation video of reactions to it – it’s not quite as hilarious as I hoped but there are some good ones in here. Some people are legit crying.


Here are a few more:

And if you can stomach it, here is the scene itself. I thought I could just quickly re-watch to remind myself of exactly how everything goes down but I’ve tried like 5 times and I can’t. As soon as the music starts playing I get super nervous and I have to stop the video. Woe is me.

What did you think of this week’s episode? Leave your comments below!