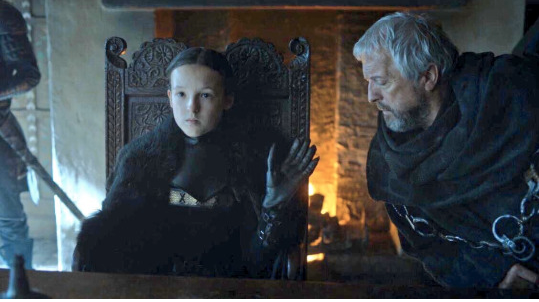 As usual, this isn’t necessarily in strict chronological order, but I’ll do my best to make sense at least. First of all, I love all the lady power going on right now on this show. Of course, I assume that means something completely terrible is going to happen soon. Too many things are making fans happy, the show must be about to kill off one or several favorites. There are rumors of the appearance of Lady Stoneheart, a book character that was thought to be left out of the show. (That’s a spoiler so only click it if you don’t care or you already know who Lady Stoneheart is.) I’m personally rooting for that, though I’m sure it would be upsetting on some levels. (No, I haven’t read the books, relax. But I do read a lot of rumors related to them.)

There are a lot of broken men in this episode. Let’s start with The Hound, a.k.a. Sandor Clegane.

Yes, yes you are. One of my favorite lines of the whole episode was when his new pastor friend is asking him what sort of man must it have taken to almost kill him and he has to respond, “It was a woman.” Damn right it was. A certain woman called Brienne of Tarth, sir. And then a second one, Arya Stark, left you for dead. What an interesting turn of events for you. 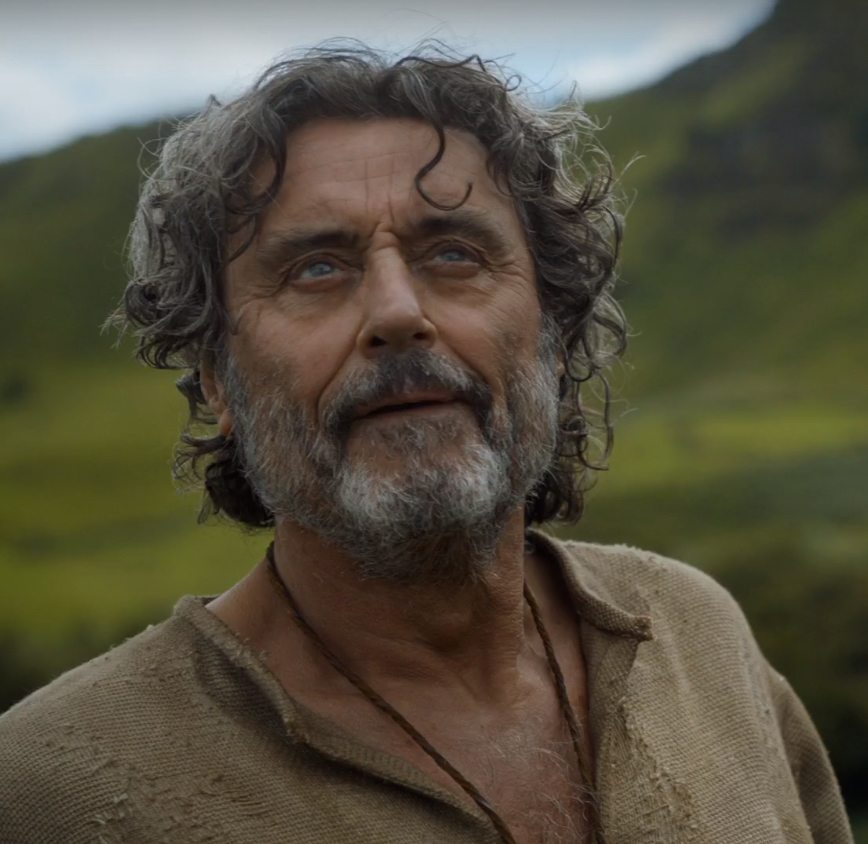 I was pretty excited to see Ian McShane, also of Deadwood (another of my favorite shows, never properly finished up – grrrrrr) on this episode as the somewhat reluctant, maybe not perfectly pious leader of the religious Westeros Habitat for Humanity folks The Hound is hanging out with right now. I’m kind of sad he didn’t last longer, I thought he’d be a more important player.

He did seem to make a major impression on The Hound, who seems to be relaxing and coming around to the idea of not being a mean murdering bastard for the rest of his days. But then, of course, it’s ruined, by our favorite villainous religious nuts, the followers of the “Lord of Light”. Sometimes they do things like resurrect Jon Snow, sometimes they do things like chop up peaceful people just because. Don’t worry though, I’m pretty sure The Hound found his hate again right quick when he came back and found all his new friends dead as doornails.

The axe of revenge

Margaery continues whatever game she’s playing at with the High Sparrow. I know she’s playing the long game here but I can’t completely figure out her end goal. However, he’s falling for it so far, which I love. She’s playing Miss Pious Reformed Holy Queen and he’s buying it completely.

I’m just going to quote directly from Funny or Die for this part because it’s hilariously perfect:

The High Sparrow seems impressed, but then is like “yo, why aren’t you doing sex with lil’ Tom anymore?” and she is like “that is weird he talked to you about that, but tbh I’m just not feeling it” and then he’s like “well, just lie there and take it, or else I’m going to hurt your Grandma” and she is like “okay, dude, I’ll talk to my Grandma.”

Of course when Margaery goes to talk to Grandma, she slips her a little note, which made my heart grow three sizes because it confirmed that she’s plotting away. 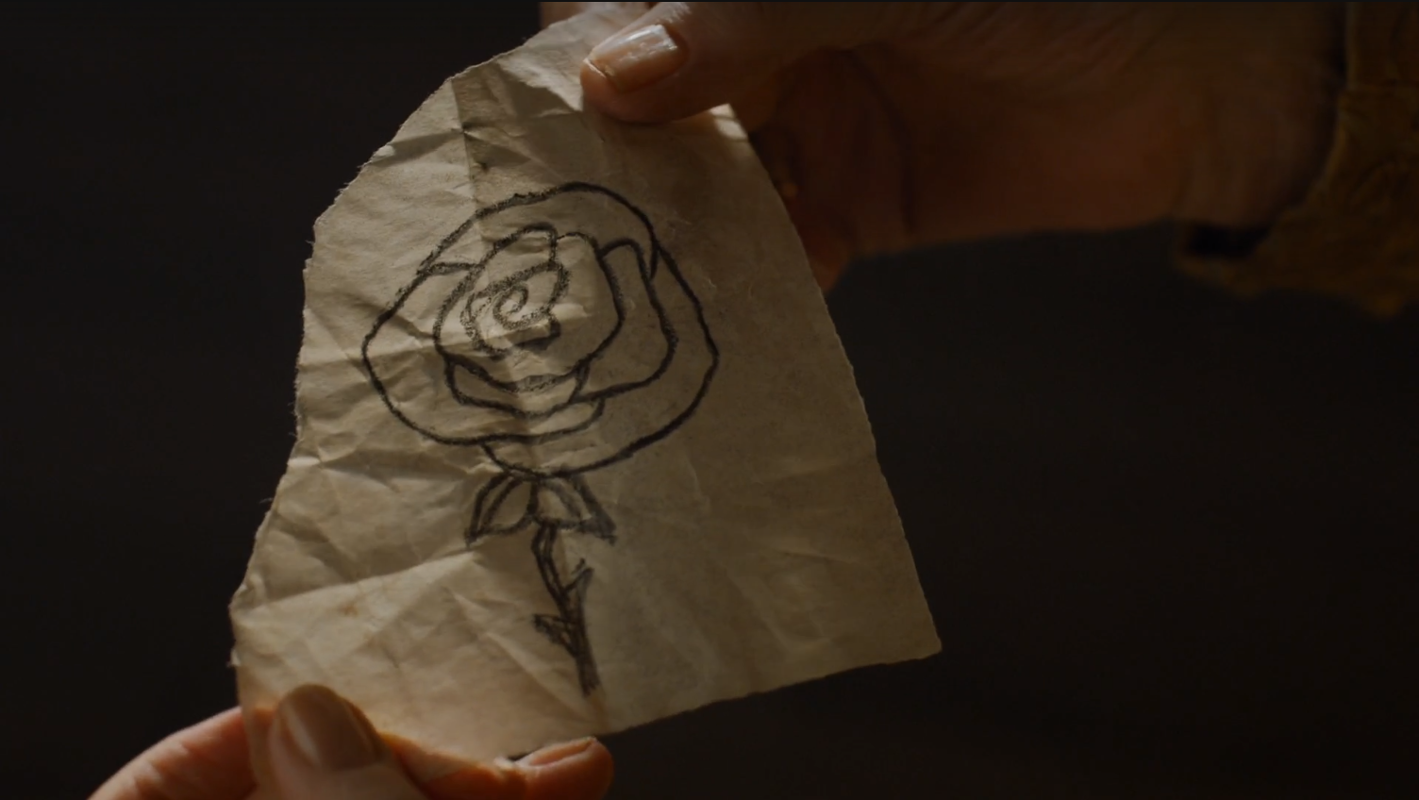 In case you don’t know, that’s a rose, the symbol of House Tyrell. She’s saying don’t worry, Grandma, I’ve got this.

Also after Cersei hears that Olenna is leaving, she’s all, No, don’t leave, we have things we need to accomplish together! We’re on the same side! but Olenna’s like:

I wonder if you’re the worst person I’ve ever met. At a certain age it’s hard to recall. But the truly vile do stand out through the years. You remember the way you smirked at me when my granddaughter and grandson were dragged off to their cells? I do. I’ll never forget it.

Or, as Tumblr put it, quite succinctly (and I can’t get it to embed so I’m just copying):

Cersei looked a little down in the dumps after she was reminded that with Jaime gone she’s just surrounded by people who hate her and that she’s literally the worst. Good, stew in it for five seconds before you do your next terrible thing, Cersei.

Of course, just because I hate Cersei doesn’t mean I like religious zealots. I look forward to zombie Mountain tearing “the faithful”‘s faces off next week when Cersei says “I choose violence”.

I have to say that I barely understand what’s going on with Blackfish and Jaime and the Freys and what business Sansa has with Blackfish exactly and etc. but I did enjoy a few things about it despite my confusion. 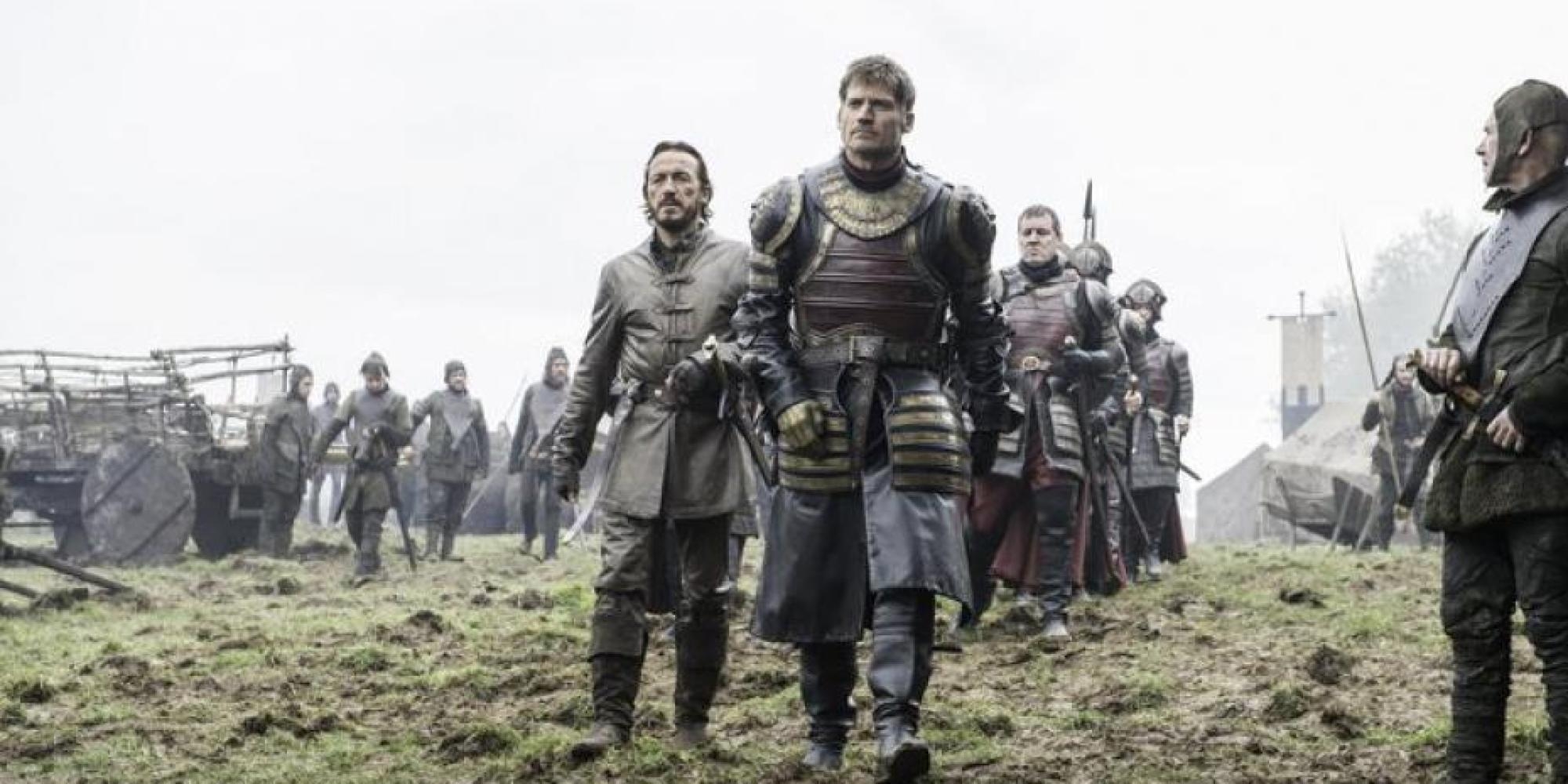 First, Jaime and Bronn showing up looking like the only people who know WTF they are doing. The Frey forces look like a bunch of buffoons and are shortly made fools of by first the Blackfish and then Jaime. 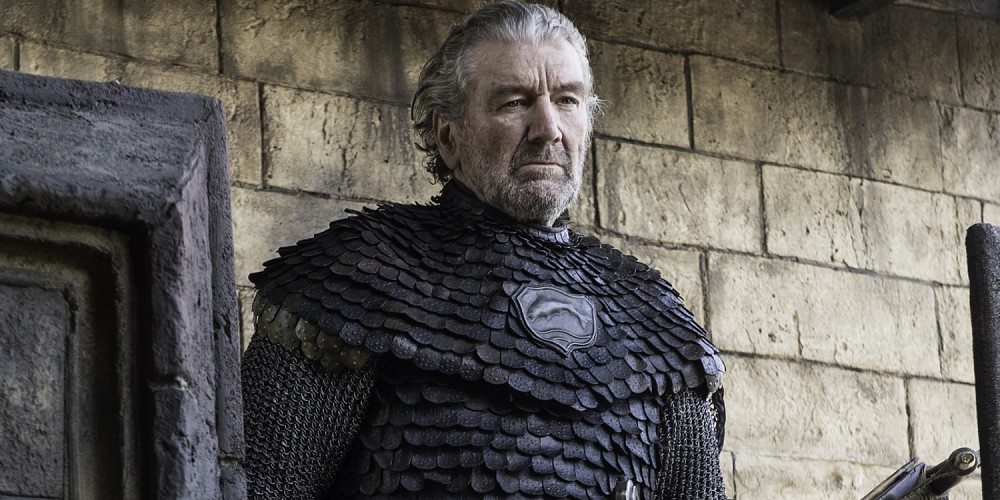 The Blackfish is utterly unimpressed with the Freys’ attempts to threaten him into giving up the castle. He tells them to go ahead and cut his son’s throat, which they don’t do. He’s not giving up the castle, basically, and they can all go jump in a lake. 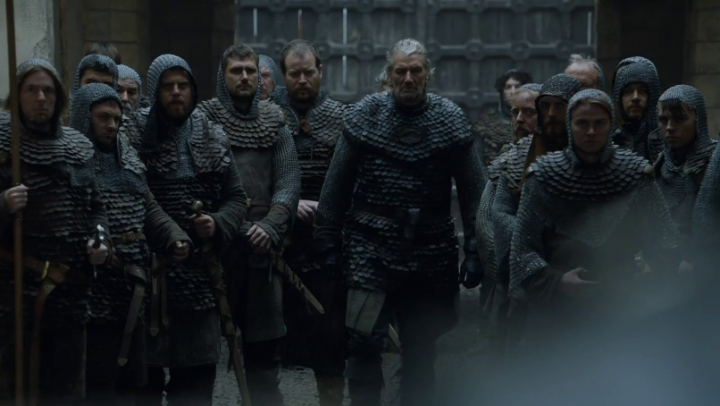 Jaime then asks for a parlay, and the Blackfish tells him he finds him unimpressive and that nobody can trust an oathbreaker.

Efffff this. Why did Cersei send me here?

Oh snap, Jaime. That’s not going away, is it? Oops. I think, if my faulty memory and hobbling together of various clues are right, the Blackfish is Sansa’s mother’s …. uncle? So he is family to Sansa and would, I expect, be likely to support her. But, he doesn’t seem intent on giving up this castle. I think his son was sent to stand-in for Robb Stark when he showed up already married to Walder Frey’s when he was supposed to marry Frey’s daughter – i.e. the Red Wedding. There’s also some business about him not doing what he should have about that whole thing but I honestly don’t remember. I’ll look it up and get back to you. For now I enjoyed the Freys and Jaime both looking stupid.

Now, on to the internet’s new favorite darling – Lady Lyanna Mormont. Sansa and Jon are traveling to houses in the north to ask them to pledge their loyalty and fighting men to their efforts to retake Winterfell. Earlier Lyanna, a girl of 10 apparently, turned down Stannis when he requested her support, in one of the best moments of season 5.

“Bear Island knows no king but the King in the North, whose name is Stark.” You done got told, Stannis. Don’t worry, Brienne will put you out of your misery soon enough.

She’s not to be trifled with. Sansa and Jon first try to engage in some small talk and flattery. She’s not interested. I can’t do it justice so here are a bunch of great gifs. Thanks, interwebz.

Finally, Sir Davos steps in. Maybe his experience with Princess Shireen, who Stannis uselessly burned alive, makes him able to talk to tough smart young girls without patronizing them. In any case, she hushes her advisors…

And agrees to keep faith with the Starks, pledging all 62 of her fighting men to the cause. Sansa appears unimpressed and Lyanna informs her that each of them is worth 10 men from “the mainland”. Davos saves the day again.

Yes, yes hopefully they are. Because they are also the worst. By the way, in case you forgot, and you think Ramsay Bolton is the only Bolton who is terrible, his father killed Robb Stark at the Red Wedding. He was supposed to be on the Starks’ side, so… not cool.

And here’s an incredibly sad theory about how the Red Wedding might have been even sadder than you thought. I kind of need to go curl up in a ball and cry now.

Things don’t go so well with everyone as they do with Lady Mormont. Lord Glover is a mean bastard who refuses to help them or fight alongside “Wildlings” – which he spits out with disgust. He’s a real treat. He also says “Yes, I served House Stark, but House Stark is dead.” 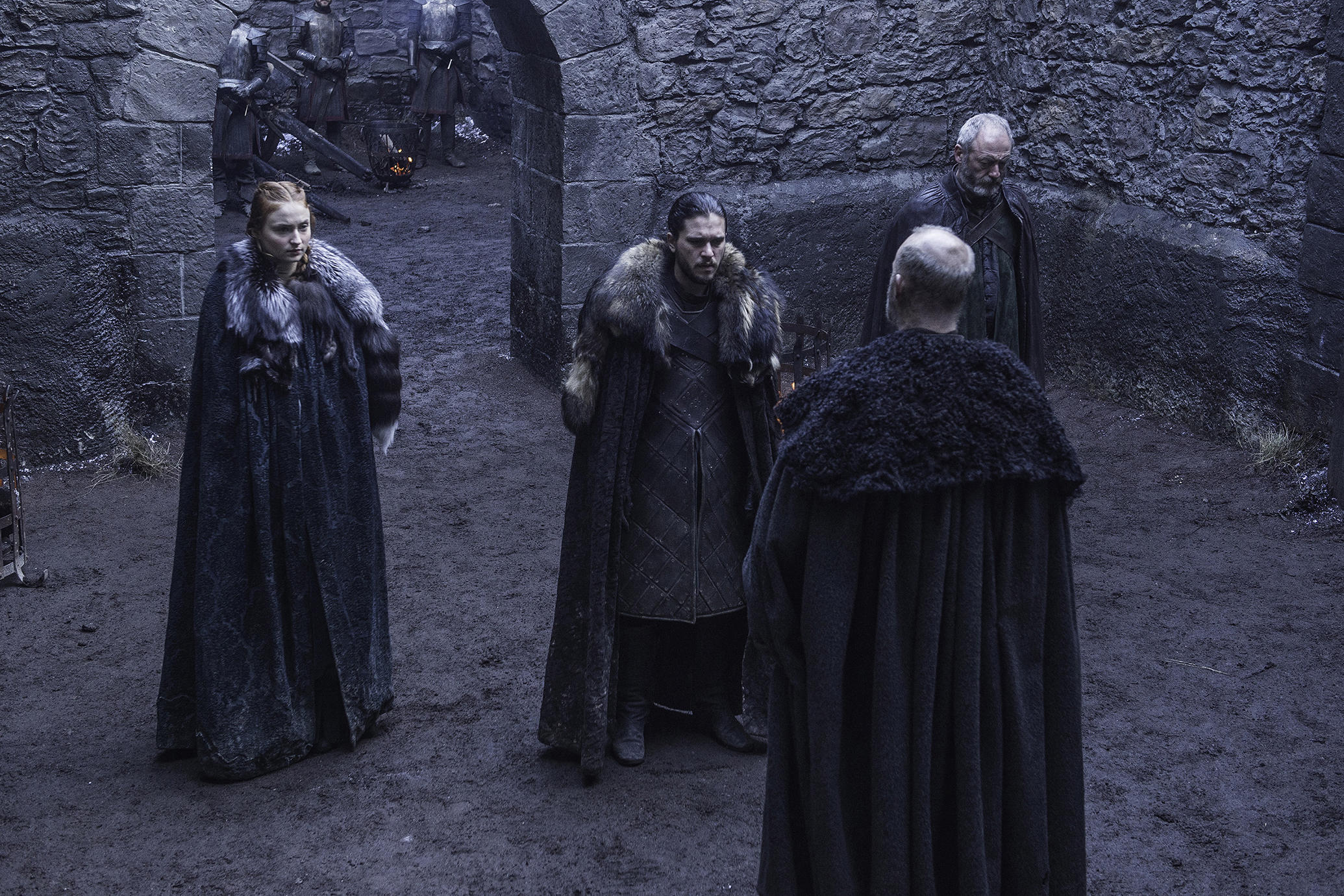 He seems to have some grudge related to Robb that I couldn’t even bear to look up because my memeory of Robb’s leadership is he was pretty good, for a guy fighting a war in the equivalent of medeival times. So if people think he was a jerk I assume they’re wrong.

Back at their camp, between breaking up fights between their various groups of “allies”, Jon and Sansa discuss the fact that they need more men (Sansa) and that they don’t have time to wait before marching on Winterfell (Jon). Both are right.

Sansa goes off on her own and sends a letter by a Raven. I’m assuming to Littlefinger, the manipulative bastard. I don’t trust him as far as I could throw him, but they do need help. I hate the idea that Sansa would be indebted to him. 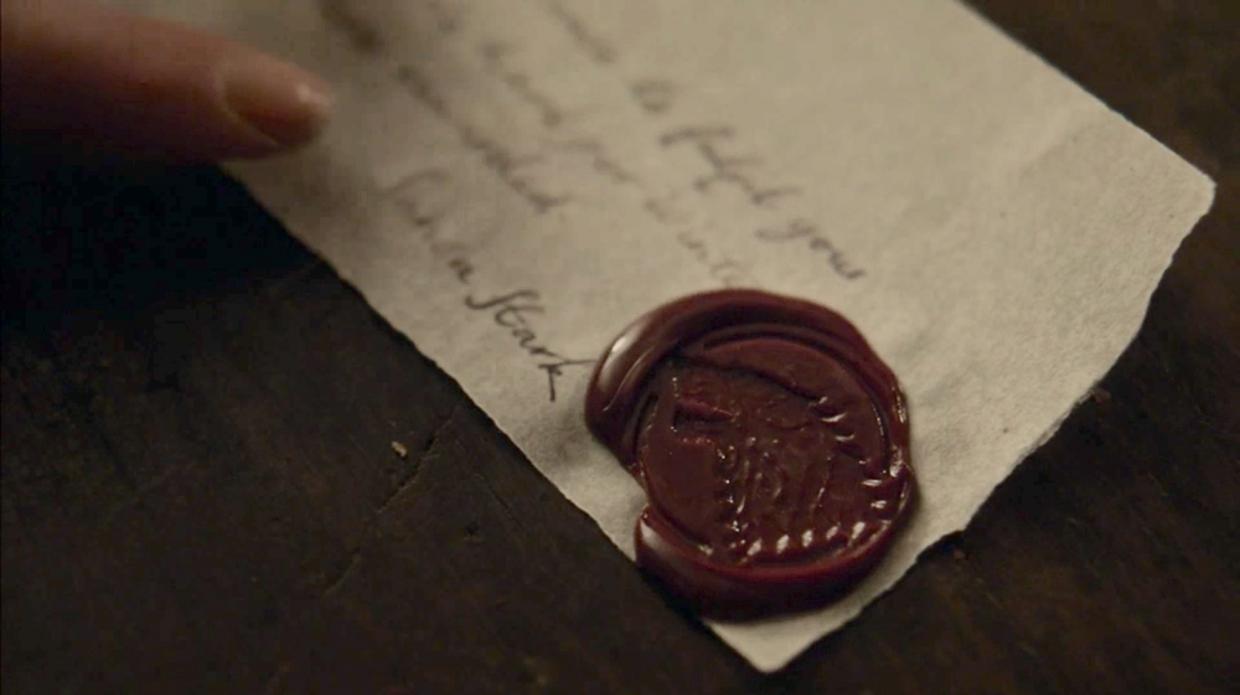 Could she be asking for help from the Umbers or Karstarks instead? I really think it’s more likely it’s Littlefinger. It is interesting that she signs it Sansa Stark even though she’s been married to Ramsay Bolton. She’s like Nope, NO DICE. I’M A MF-ING STARK FOR LYFE.

The folk of the internet have done a decent job trying to figure out for certain what Sansa’s letter said. This is the deciphering people have alleged they have been able to do.

“[…] to protect me. Now you have a chance to fulfill your promise. […] Knights of the Vale are under your command. Ride north for Winterfell. Lend us your aid and I shall see to it that you are [well/properly] rewarded.”

What does it mean if Sansa gets help from Littlefinger? Well, if it ends up meaning she and/or Jon are “Ward of the North” she probably doesn’t need to worry too much about Littlefinger manipulating her, at least not in the near term. I just hope there aren’t terrible consequences ahead for her reaching out for assistance. I really want her to rise to a level of high importance and put some baddies in their place. Come on Sansa, I’m rooting for you. 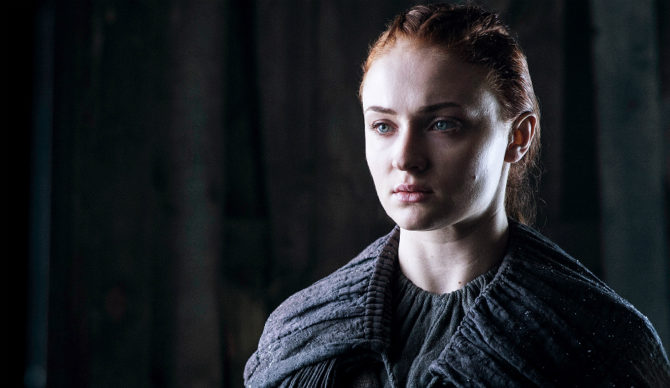 I actually think this needs to be a two part post. That’s how many things I think were important in this episode. Pffft, and you thought it was a no big deal episode, I bet, right? Fools.

Stay tuned for Part 2 where more broken men will be discussed, including Theon Greyjoy, and I’ll talk about Arya’s fate!