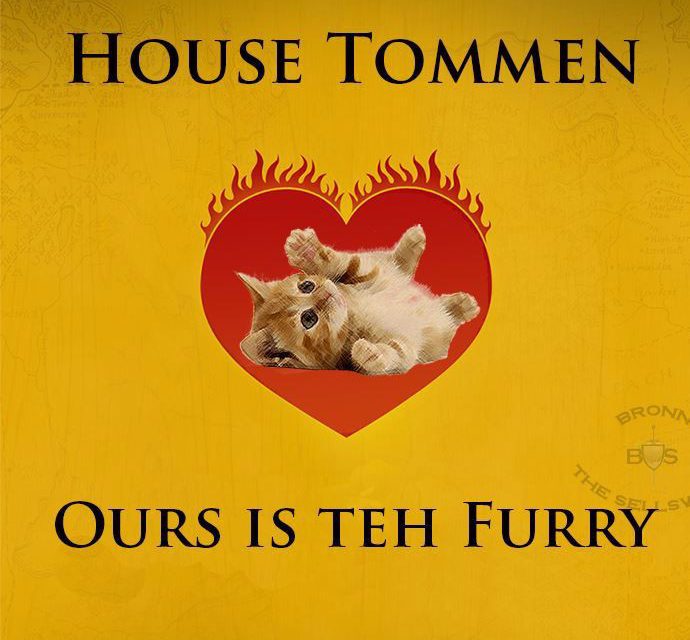 Sangfroid: Game of Thrones has finally decided to concentrate on

bringing characters together. George Martin might have the luxury in his door stop books to have his people wander in the desert forever but this is TV and it’s time. Tyrion went from a stinky box to a luxury box and now he’s on his way to meet Danny and her dragons are hungry so the next stop might be lunchbox. If they could work Ramsay into that equation all the Tyrion fans will be on the edge of their seats.
Acadia: That’s all true but why couldn’t he get a chub with that chick?  And does this mean something is going to happen?  I am starting to feel like Butters.  (See video at bottom of page. Definitely NSFW)
Cider: He’s not the same person anymore, Acadia, get it? He’s all honorable and whatnot now. I’m not sure what game Jorah is playing but I don’t think bringing Dany the Lannister who was willingly on his way to see her anyway is going to win him many points. Dude, you are on the outs with her for good I would hazard. 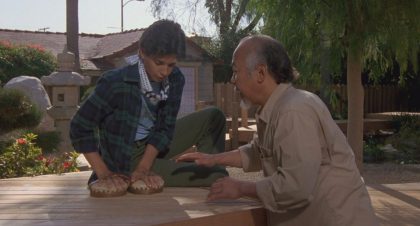 What do you mean there’s no dead bodies to wash in Okinawa Karate?

Sangfroid: It seemed like in the Karate Kid the whole shtick was a lot more fun. “Wax On. Wax Off.” is a lot better than: *Clean the Stiff. Dry the Stiff.* Arya should have looked a little harder for mentors. I’m sure there must be a Westeros equivalent of Okinawa. Maybe Mr Miyagi is down teaching the Sand Snakes how to wax his car. I hear those delicate ladies are pretty dangerous. Everyone just got the crummy obligations this time around: Jon is digging latrines and cutting off heads. Sansa is engaged to the naked Australian extra torturer. Podrick isn’t getting to show off his sword to Brienne. (Think about it for a bit)
Acadia: I don’t even remember who Arya is supposed to kill.  I keep

getting distracted by her googly eyes.  The best part of that whole thing is the super strength of that other chick who I thought was a boy but now I think is my favorite character.  Podrick has it made now and if he tried anything with Brienne he would get whatever he thrust at her handed back to him backwards.  Black Sansa should have just left when Littlefinger said they could leave if she said so instead of heading down to castle crapheap to marry the dong-chopper.  That pisses me off and I am getting super sick of her.  What’s she going to do when she finally sees Reek?  Whine?  That’s her signature move.
Cider: The important things to know about Arya’s story this week are as follows, courtesy of Tumblr:
1. Needle was Jon Snow’s smile:
2. There is only one God and his name is Death:
I agree that Sansa started off as super whiny but when I think of the awful crap she’s been through I think I’m kind of proud of her and I’ve come around to Camp Sansa. I hope she does something kind of amazing with this turn of events. Please, Sansa. Please be amazing. I have all my fingers crossed.
Sangfroid: I like to think a few Southern Baptists that were fans of this show were sweating a bit when the High Septon got caught playing games with the Seven. What kind of pervert choses the stranger anyway? We’ve got some Savranola action going on in King’s Landing. Cersei might think she’s being clever hooking up with the barefoot Sparrow but these types tend to enjoy more bonfires than Melisandre. She seems to be failing in the Mother-in-Law from hell role though. The new king isn’t going to listen to Momma until he gets tired of his new toy and she seems to have some training that would make a hooker blush.
Acadia: I watched on my TV so I could not do my boob comparison chart but he chose poorly.  I might have to go back and re-research that.  Cersei is going to get that super mom strength and do something nuts, I think.  King Hornball is all she has left.
Cider: I worry about Cersei’s super mom strength too. But, Margaery is a suitable adversary. After all, she killed Joffrey, right? She is no slouch at treachery and sneakiness. And I love that she loves Sansa. That gives me hope too. A friend suggested to me that Margaery and Sansa should rule Kings Landing together and Dany and Jon Snow can rule the North/the wall. Dragons would probably be handy at the wall. I like these ideas.
Sangfroid: The thing with Tommen bugged me a bit. How old is that kid supposed to be? The whole idea of Ser Pounces was that he wasn’t mature enough for the kind of bedroom gymnastics Margaery has on offer. Now it’s like: Oh boy this is the funnest thing ever. Sure let’s get rid of my mom. 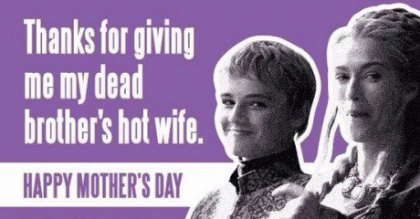 Acadia: That’s no more strange than why all the female teachers who bang their students are hot.
Cider: I was kind of wondering the same thing but I guess we’re just supposed to suspend disbelief in this case and compare poor little Tommen to Margaery’s hotness and just agree that’s he’s taken with his older wife he doesn’t deserve who will play him like a fiddle. At least she lets him have some fun before whatever she’s about to do.
Sangfroid: Well at least Tyrion got out of the Luxury RV. “Never get off the boat man!” is a quote I try to live by when there are real tigers in the jungle. I’m not sure why the little prince couldn’t consummate after he’d taken such a big risk to get off the moving box. Oh well. I’m liking the way the showrunners are keeping the plot running along by flogging George Martin’s script unmercifully.
Acadia: I didn’t read the books.  I had a friend who refused to read the Harry Potter books until she had seen all the movies and I am now doing the same thing with the Walking Dead and this.  I want to be a reverse jerk instead of a book jerk.
Cider: Given the rate at which I’m currently reading other books in my life if I waited to watch the show before I read the books I might literally die before I got around to it, so I’m being a reverse jerk too.

Sangfroid: I’m not sure who Sansa is in the most danger from at the moment.  Ramsay has a lot of fun playing with sharp objects but he seems to fall apart when he’s around Daddy. I’m going with Littlefinger and that creepy pedophile look he gets around Sansa. The whole idea that the Sansa in Black might be plot acceleration and she won’t be the one dish rag Stark is exciting for me. That eventual grin when she met Roose Bolton. It was chilling.
Acadia: BLACK SANSA IS A WHINY CHICKEN
Cider: I agree, I loved that. Also I can’t express how much I loved this, and I hope it’s foreshadowing:
Sangfroid: In the books Sansa is just a plot device that moves things along. She gets Ned killed and she’s the one that brings the poisoned jewelry to Joffrey’s wedding but isn’t actually responsible for the murder. George Martin doesn’t seem to want to let Sansa do anything useful. Even in a new chapter he published on line Sansa is still just an amateur at the conspiracy game. Sansa getting engaged to Ramsay is something totally out of the blue just for the TV Show. Black Sansa is something completely new and I’m hoping it’s one of the secrets Martin let the showrunners in on in case he dies before completing the saga.
Acadia: Someone will kill him for going so slow.  Does he type with a pencil?
(George R.R. Martin writes on a DOS-Based word processor from the 1980’s) 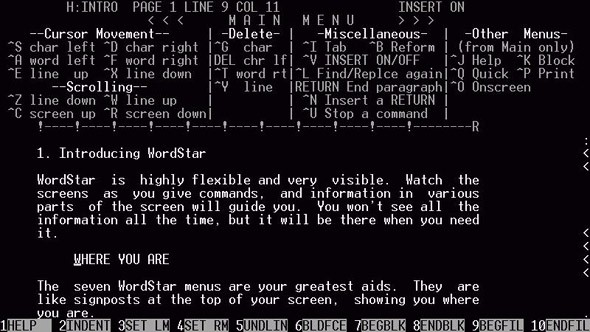 Sangfroid: This will have to go down as the religion episode. The High Sparrow, Red Priestess of Volantis and the Faceless Men, all compete for the weirdest religious alternatives to (As we saw with the High Septon at worship) what’s already a weird religion. I loved the interiors of the House of White and Black. Of all of them that temple seemed to convey the dark core of the Faceless Men the best. I was glad when the nobody who used to be Arya hid needle. A girl just needs something sharp to stick into all the people she hates.
Acadia: Why is everything inside the House of White and Black grey?  And why are they evil?  They were nice to Arya way back when.  Why did the sad wanna-be boyfriend of dragon girl just have some dwarf sized rope just lying around?  WHY WOULD YOU PEE OFF A MURDER LEDGE?  The best case scenario is that some other drunk bumps into you and knocks you into the water.  Damn.  I need to screen cap those bewbs.  I have let everyone down. 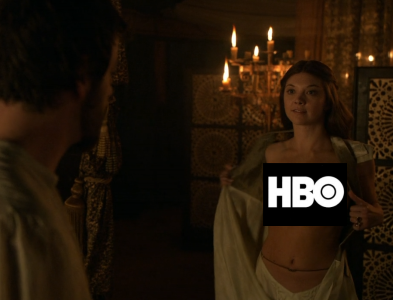 Because of Acadia I’ll never know what attractions Margaery has.