Game of Thrones – "The Wars to Come" Roundtable 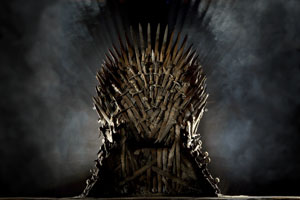 It’s time again for the Game of Thrones. When Grover Bluejoy announces: “I’m sorry it looks like you choked, Joffrey.” I knew Game of Thrones was back. Musical chairs does seem like a much better solution than all the death and destruction on the real show. With Katy Perry Sesame Street even has world class weapons of mass feminine distraction.  But until George Martin admits King Grover should sit on the iron throne (It’s made of nine irons of course) you’ll have to settle for Cider and I talking about the HBO version

Everyone Dies. The End

Sangfroid: We had to have a flashback opener because so many plot lines got torn apart last season. Who doesn’t listen to witches? Bubble Bubble Boil and Trouble…Everyone is going to die but Tyrion and Arya. Even then George Martin might have to do them in as part of his intensive kill all my favorite characters therapy.

Cider: What should actually happen is that Tyrion, Arya, and Daenerys should co-rule, each with a dragon sidekick. This is both the most just and the most awesome option available.

Sangfroid: I love how the showrunners Beniof and Weiss destroyed a couple hundred pages in getting Tyrion to Pentos. Look George, we got to an entire new land without describing that long river voyage in endless detail. It now all takes place inside a stinky box. The Mother of Dragons needs some Lannister wit to save her from the awful plot line she’s stuck in.

Reading George Martin is more like weight lifting than reading.

Cider: I haven’t read the books so I don’t care about this nonsense about skipping ahead. I want Tyrion to be in Pentos and get moving with some story line here. I agree that Daenerys is in trouble and a clever Lannister (preferably Tyrion) would be quite useful right about now. Please make it so. Of note, she made a horrible mistake chaining up her dragons. I understand her sympathy for the burnt up child and that she’s supposed to be a tough queen with a kind heart but dude, you just ruined those dragons as surely as if you tied a dog out in the yard and never visit it. That is plain wrong. I am interested to see the repercussions.

Sangfroid: Whether you’re in Mereen for the mandatory nudity or out at the wall for some manly man stuff the story there seems like we’ve seen it all before. It’s a good thing Melisandre is around. I know my heart starts racing when a cult priestess asks sweetly if I’m a virgin. I too want a great many things Jon, among them is to explain where the Wildlings went and why exactly Mance won’t swear fealty.

Cider: OK here is where I am having some issues with the storyline so maybe the show isn’t doing a good enough job of explaining but I don’t get why anyone gives a crap about Stannis. Is his army way way bigger than I think it is? I hate Melisandre with an intense passion and heat greater than the heat from her imaginary “one true god” who, as near as I can tell, seems to actually be something more like Lucifer or at least the old testament style “one true god”, what with the shadow “baby” she birthed that killed Renley, the raising of people from the dead in an utterly disturbing manner, and the burning people alive and whatnot. Nothing very peaceful or light about this whole situation. She is basically the worst. I get why Mance won’t swear fealty, it’s just a thing. No matter what, he won’t do it. Even if it makes no sense. But again, I don’t know why he would. I thought the Wildings were so overwhelming in their number that it would be a problem for Westeros, I thought that was the idea. Why do they give a crap about what Stannis tells them to do?

Sangfroid: No spoilers please. Even if you sailed with Long John Silver to the treasure caves of HBO I don’t want to hear it. I’m getting so lazy I didn’t even look up if Cousin Lancel has been recast. Littlefinger is going to do something mean to his nephew and what the hell in Brienne doing being so nasty?

Cider: I love/hate Littlefinger. I have to admire his cunning and brutality on the one hand, but I just don’t want him to do something to hurt one of my favorites. I always want Sansa Stark to be OK. He can throw his nephew from a cliff for all I care, that kid is useless. Brienne is mad that Arya wasn’t into lady power and solidarity with her. I get it, people should be more impressed with her honestly and she gets shit on a lot. I’d be pissed too. Of course it is cruel of the show to drive Sansa right past her in her little encampment there. Classic.

Well that’s it until next week. I’m sure the dragon will eat a major character. Maybe it will be Tyrion since he’s in the area. Since none of us here at Superficial Gallery pirated the first four episodes we’ll be just as surprised as you.

Filed under: game of thrones, round table