Game of Thrones: The Winds of Winter 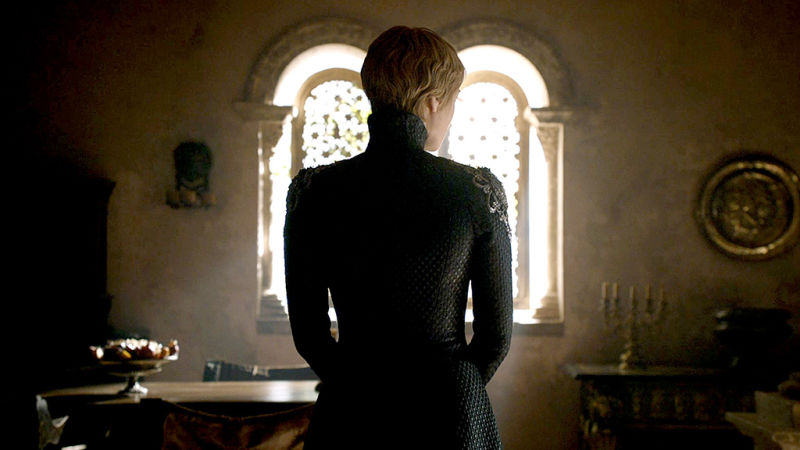 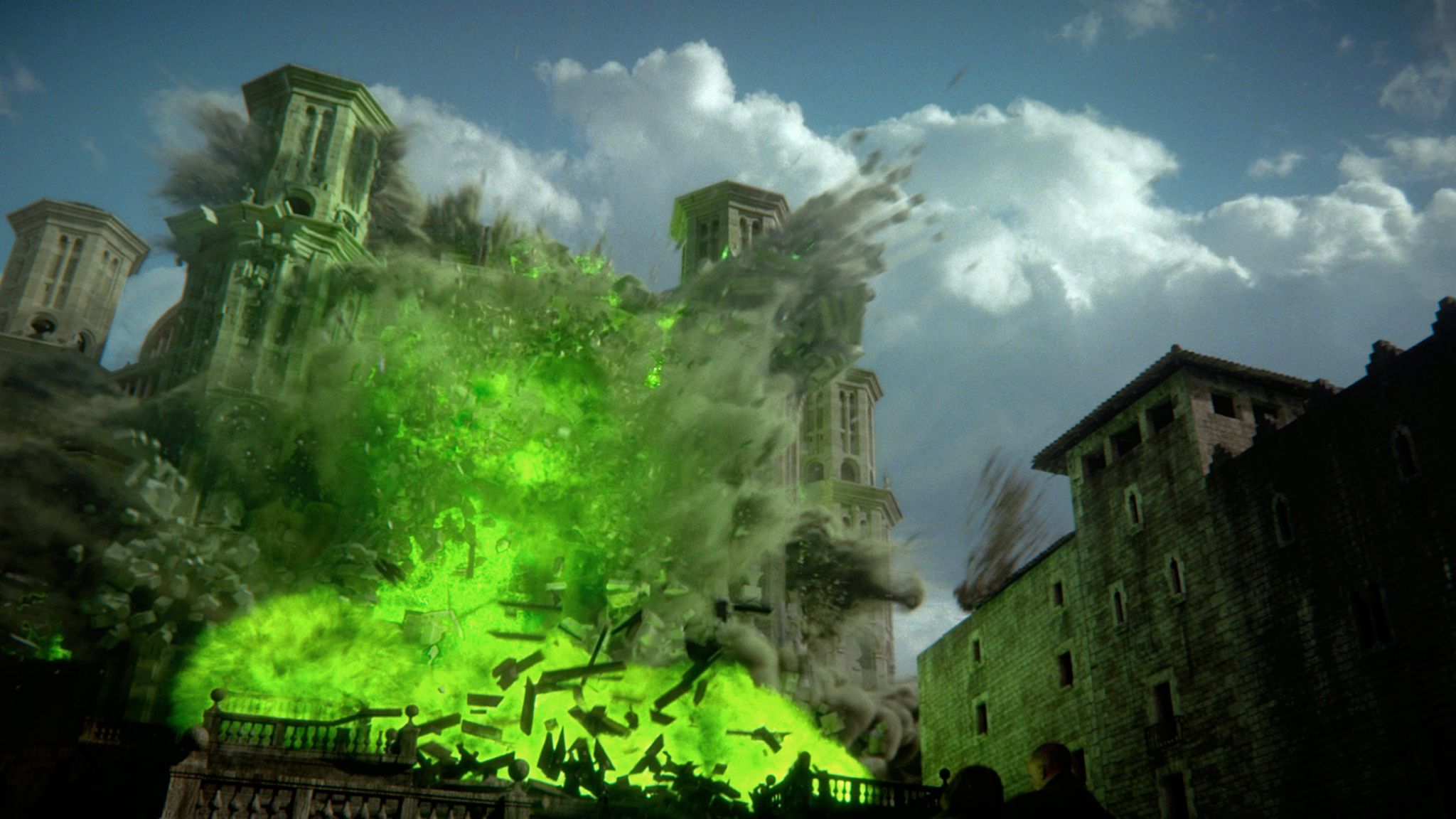 Wow. Well. Didn’t this start off with a bang? Literally.

I’ll just try to run through everything as quickly as I can, it feels like the end of this season was a lot of fan service, which I can’t say I really mind, but I worry that the first episode next season will ruin it all. I’ll try to just enjoy it for now.

Early in the show we have the setup for Cersei and Loris’s trial at the Great Sept of Baelor. However, Cersei does not seem overly anxious to arrive. And The Mountain is sent to keep King Tommen from attending. Hmmm.

Margaery quickly gets suspicious. The more time passes while Cersei doesn’t arrive, the more sure she is that there’s a problem. 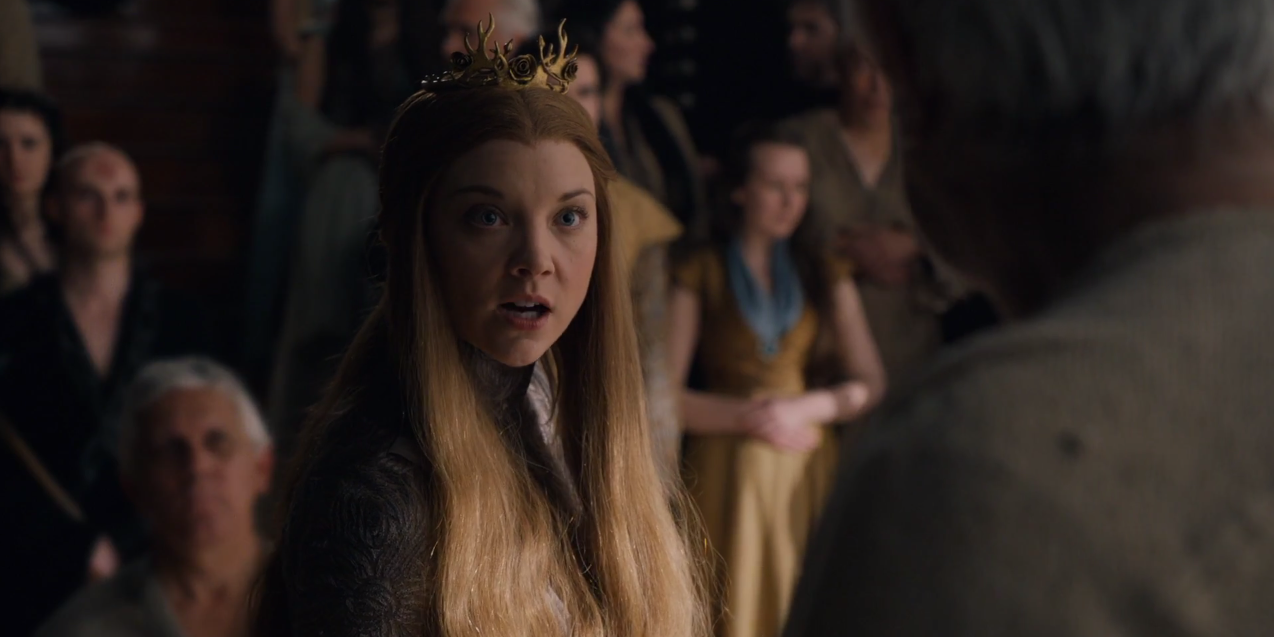 Of course we see that Cersei has masterminded a plan to blow up the Sept. I was convinced Margaery would get out, maybe with Loris and an “I told you so” but nope. Instead she locks eyes with the High Sparrow just as he finally realizes what is happening. 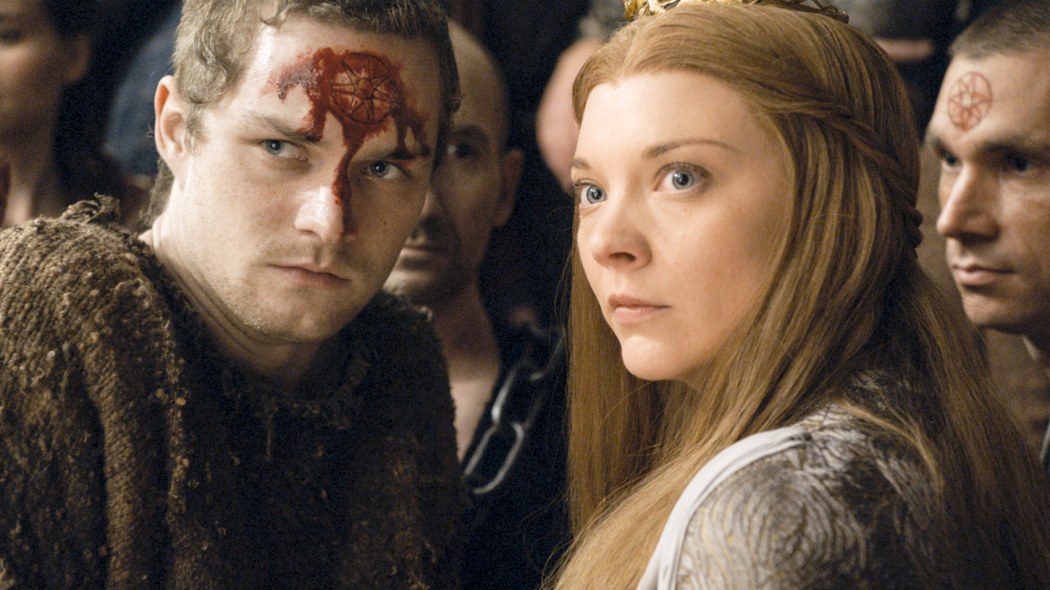 While I was actually pretty upset that Margaery was killed, I say good riddance to the rest. But I don’t like that this has me almost rooting for Cersei. 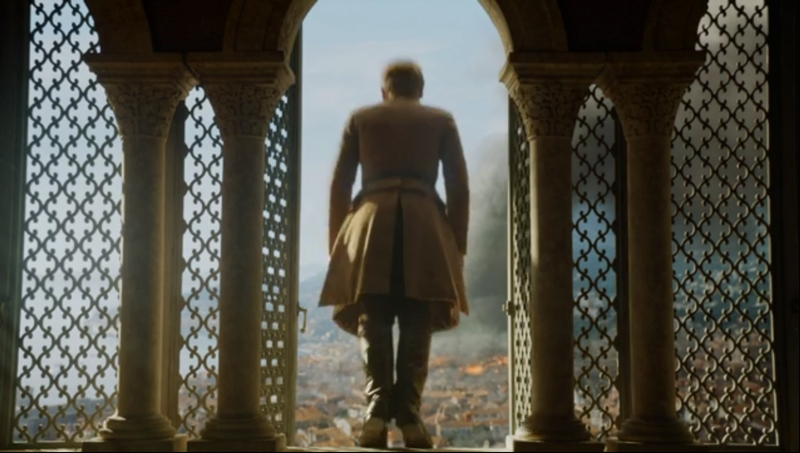 I thought, for a half a second, that the karma would be that Cersei’s weak boy king son, Tommen, kills himself – i.e. that this would upset Cersei, but she seems to give about zero effs. Cold as ice, lady. And of course she visits a disturbing level of revenge on the Septa who tormented her during her imprisonment. I understand the need for revenge, but you could just kill her Cersei. Well, I guess that’s not your style, and this is why I can’t really ever root for you. You’re no good, in the end.

Meanwhile, Jon Snow tries to have a casual convo with Melisandre, only to be interrupted by Davos announcing that she burned Princess Shireen alive. 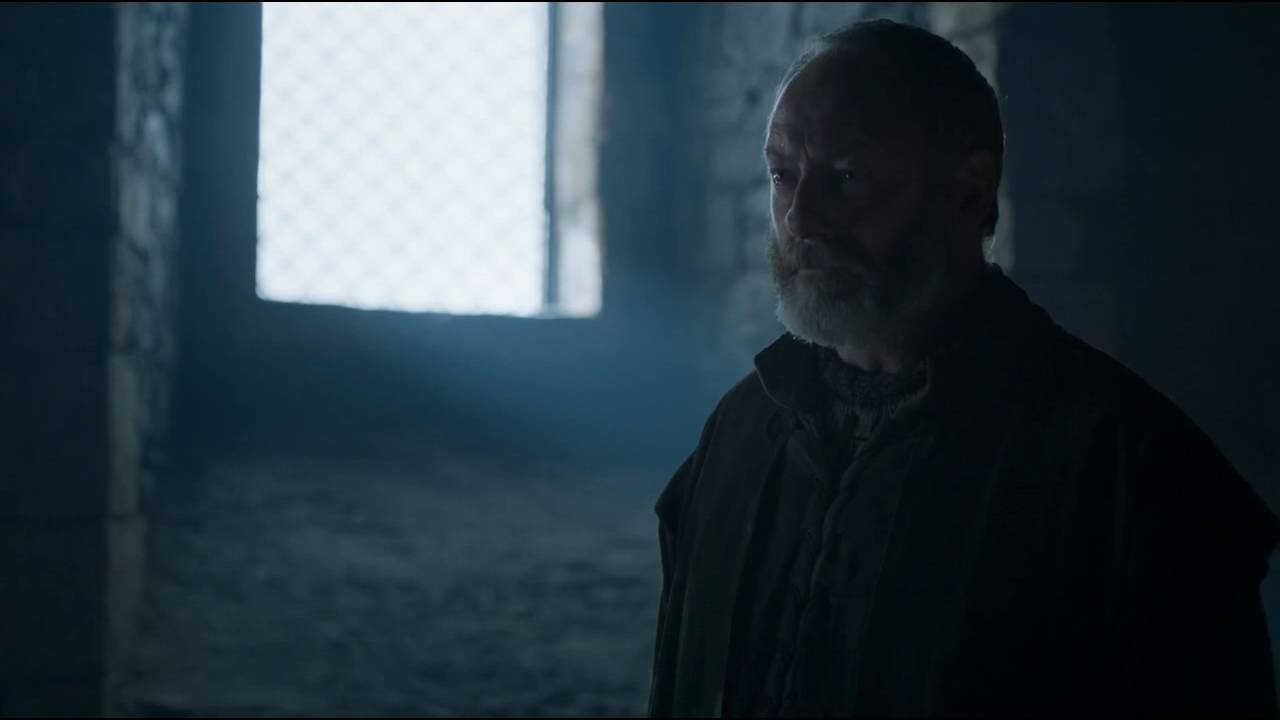 “Any god that tells you to murder a child is an evil god.”

I’m sick to death of all the religious fanatics on this show, as I am in real life, so I’m all about her getting told what’s up, and sent away, except I’d rather that Jon killed her. I guess he maybe feels like he owes her something for bringing him back? Or he’s sick of killing people for a while? Or… I don’t know. But I was certainly nervous for a second that he might keep her around for some unfathomable reason. Thank you, Jon, for not doing that. 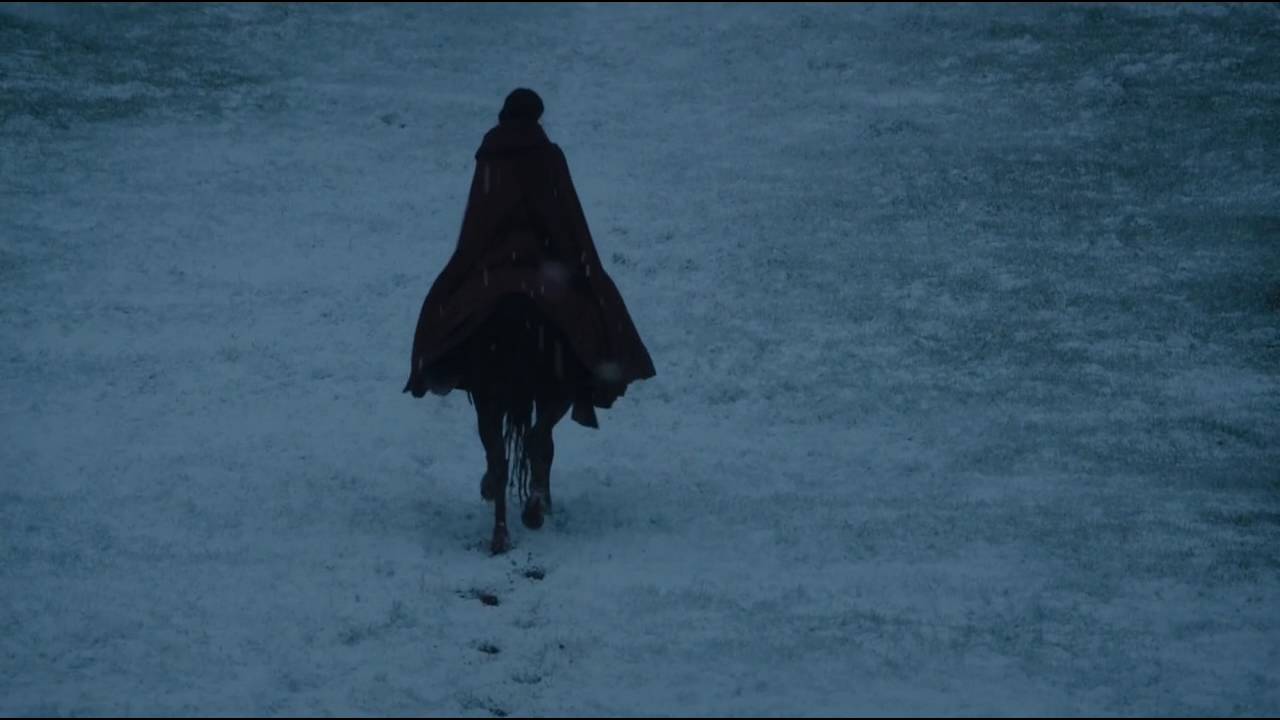 See you, wouldn’t want to be you.

In case you were wondering how Bran was going to get south of the wall, apparently it’s not by way of his uncle Benjin, who leaves him by a tree with no cart or horse and is like “Welp, see ya later, pal. Good luck and whatnot.” Oh OK, cool, sure, I’ll just touch this magic tree and almost learn who Jon Snow’s parents are but not really completely. And then I guess I’ll just, like, lie here forever or something. Poor Meera, she is probably wondering why on earth she is doing this. 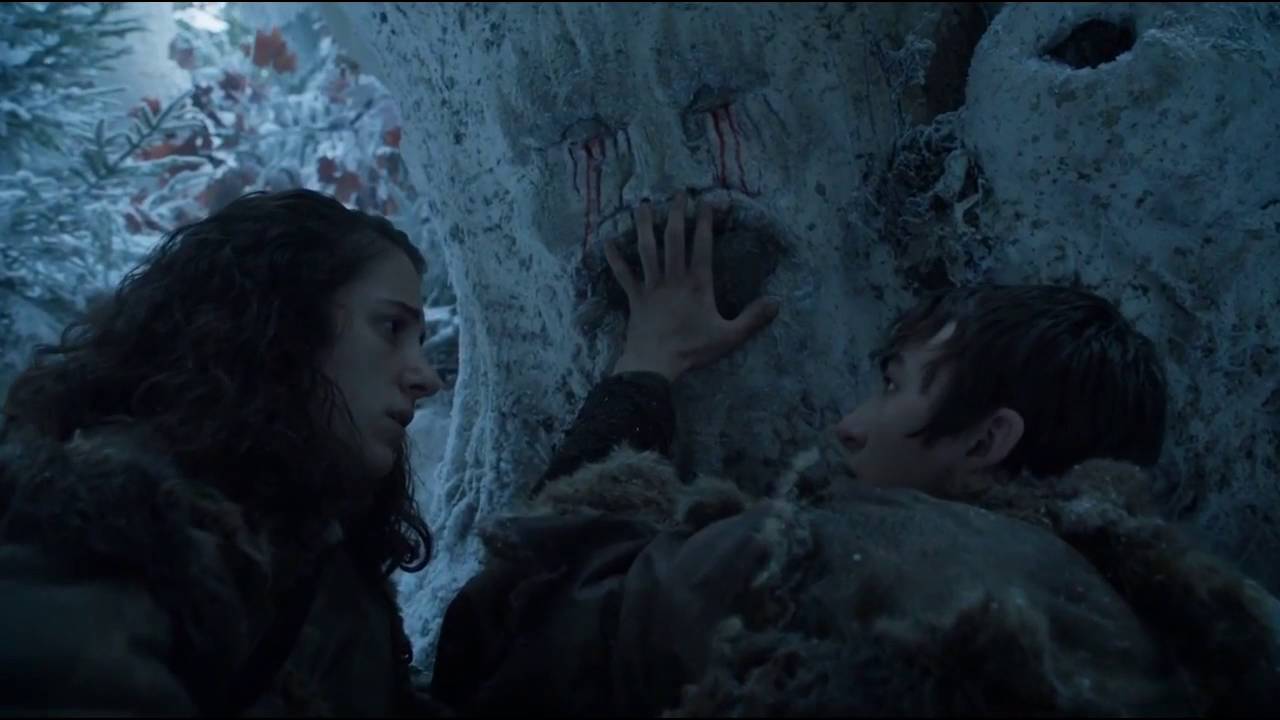 WTF are you doing Bran, do you even know?

In Bran’s flashback we see Ned Stark run into the tower where he was fighting and see his sister Lyanna, having just given birth. She whispers to him who the father is (which, predictably, we can’t hear) and says “If Father finds out, he’ll kill him. Promise me.” and hands over baby Jon Snow, which is confirmed when the scene moves from the baby’s face to Jon Snow’s directly, in case you didn’t already know what was happening. 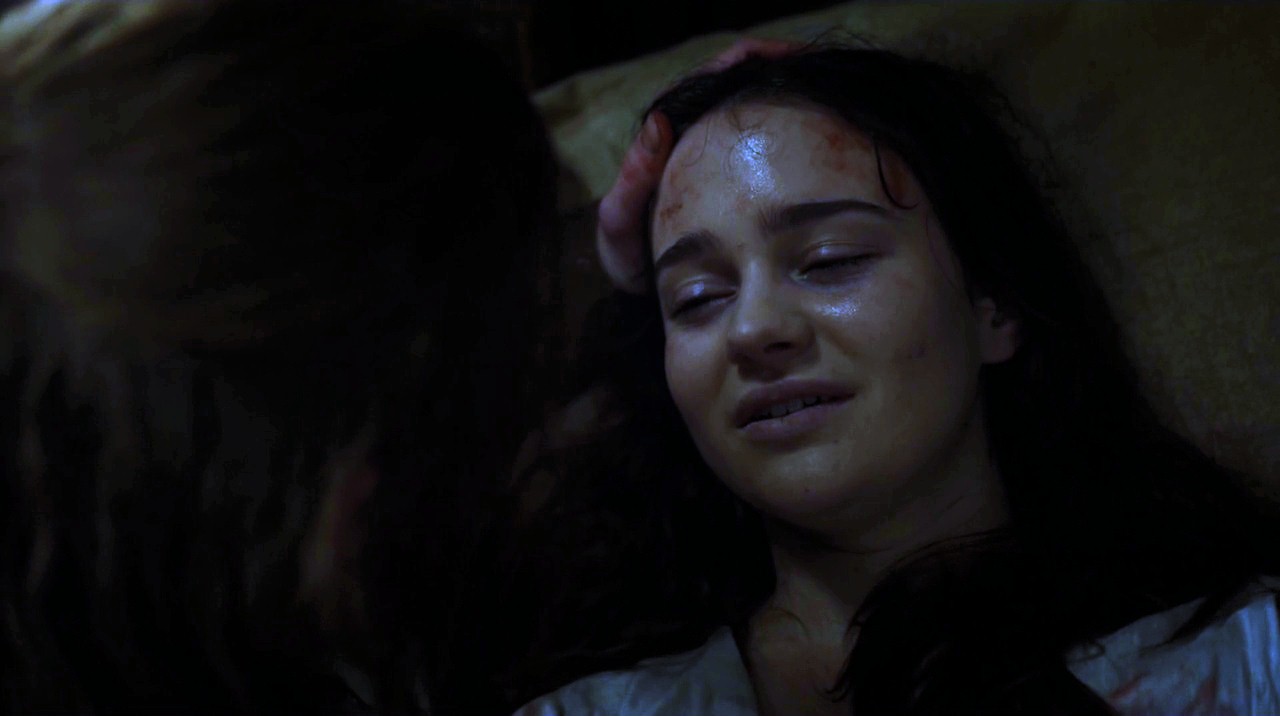 I’m sorry but I had a baby and bled out. Please pretend he’s yours, thanks.

I don’t know if Bran is supposed to hear what she said or not but it’s frustrating. At least we can now confirm he’s not Ned’s son.

Meanwhile, Jaime is with Walder Frey, I believe still at The Twins, not Riverrun, and Walder seems to think there is cause for celebration and that he is a great conquerer because Jaime took Riverrun back for him. 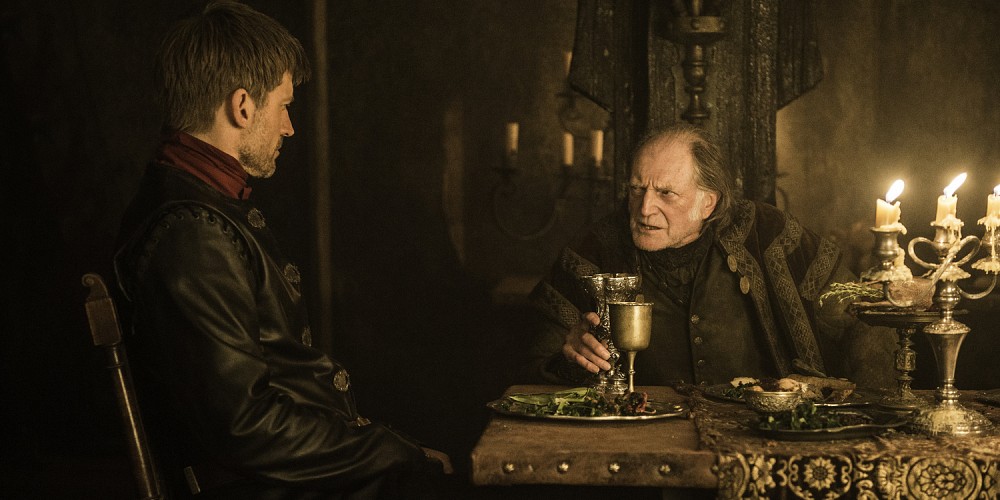 I am very amazing and a total bada$$, Jaime. Recognize.

Of course, Jaime succinctly informs him that he’s worthless since the Lannisters have to keep coming back and fixing things because he can’t keep it together. Oops. But don’t worry, this curmudgeonly old hobgoblin isn’t long for this world, because now Arya Stark comes back with her magical face swapping trick and serves him his own sons in a pie and then cuts his throat. Although there are great Mother of Dragons moments coming up, I think this has to be my favorite scene of the episode. I’m ready for Arya to continue crossing people off her list, and she did this so perfectly. I love her. 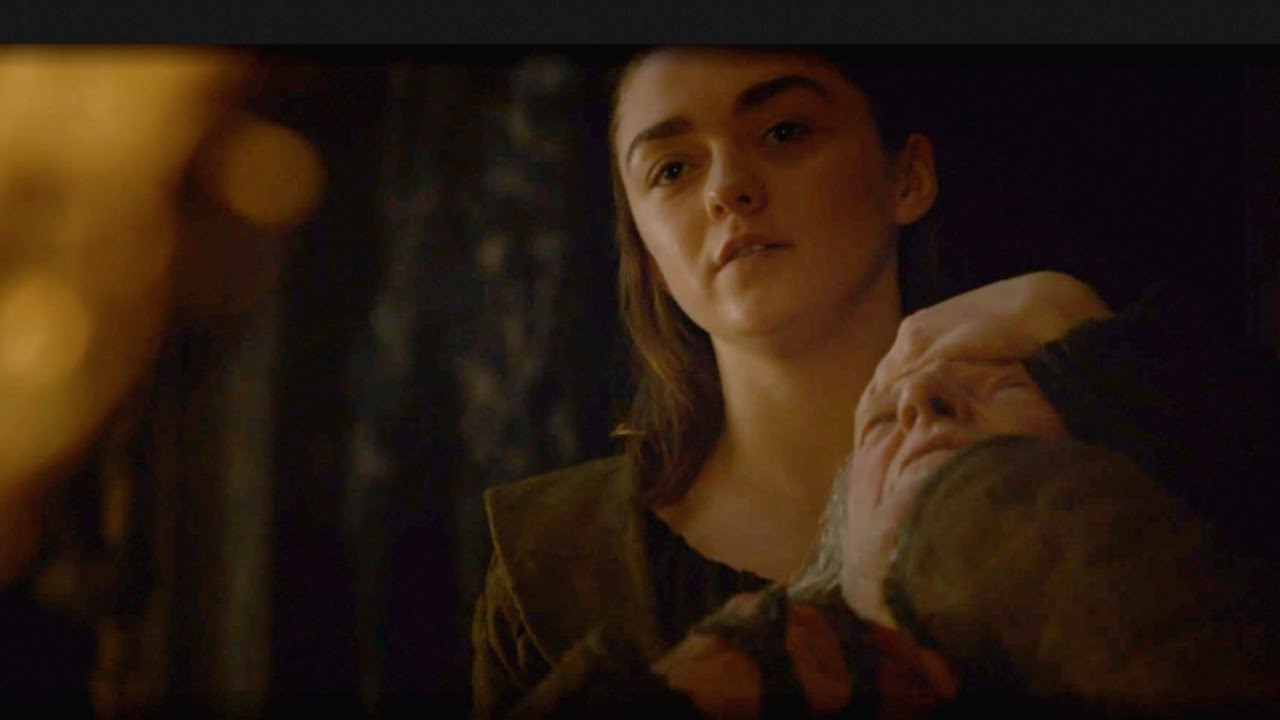 “The last thing you’ll see is a Stark face smiling down at you as you die.”

Oops, Walder. You effed with the wrong family when you effed with the Starks. I mean, I know you couldn’t have realized that a 14 year old girl would become an assassin and cut your throat, but you probably should have considered that maybe everything doesn’t always turn out well for you when you slaughter an entire family at a wedding. Just saying. 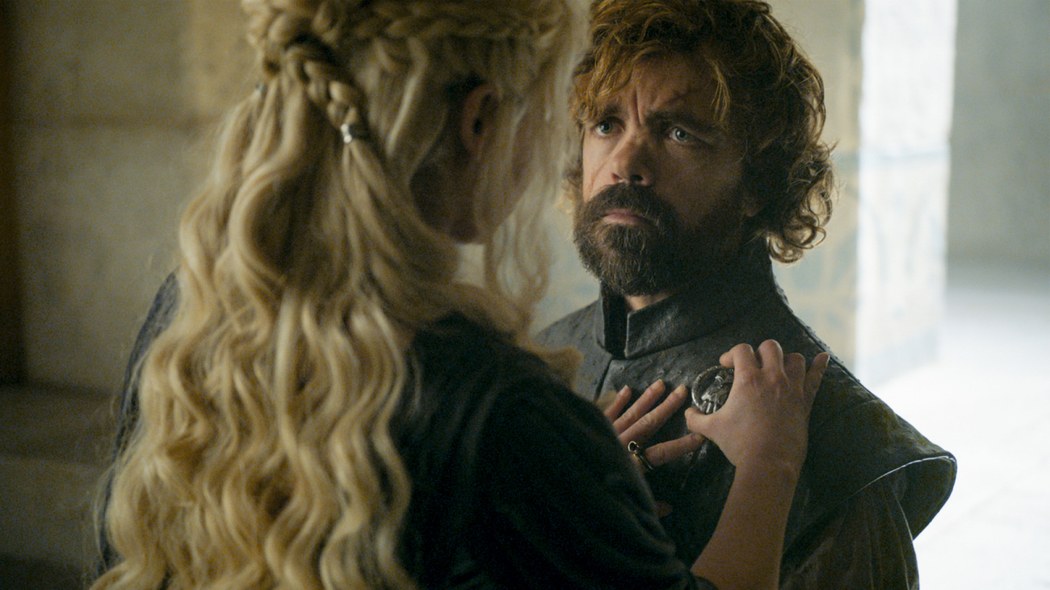 Look at his face. Look at it!

Meanwhile in maybe my second favorite moment, although honestly it’s hard to narrow it down, Dany officially makes Tyrion Hand of the Queen. This after he gives her a speech about how he believes in her to an embarrassing level, after not believing in anything at all his entire life. The whole thing kind of makes my heart happy. I mean, it’s hard not to like this. Tyrion has always been pretty decent, although also a good politician, and never fit in with the crappier nature of his family, and Dany is going around breaking chains and freeing slaves. I would be on this team too. Sign me up.

Meanwhile in the north, we have some nice discussion between Sansa and Jon. Jon tells Sansa he had their parents old room made up for her because she’s basically the resident Stark in charge. She says that’s weird and it should be his.

This is a lovely moment where she also apologizes for not telling him about the Knights of the Vale, and they discuss how utterly untrustworthy Littlefinger is, and how they must trust each other. Great. Good. Yes, more of this. Starks united against all jerks in the world.

Then of course we have the scene where Littlefinger interrupts Sansa at the magical tree she’s hanging out not praying at, and informs her that his singular vision is himself on the Iron Throne with her at his side. She’s unimpressed, utterly. 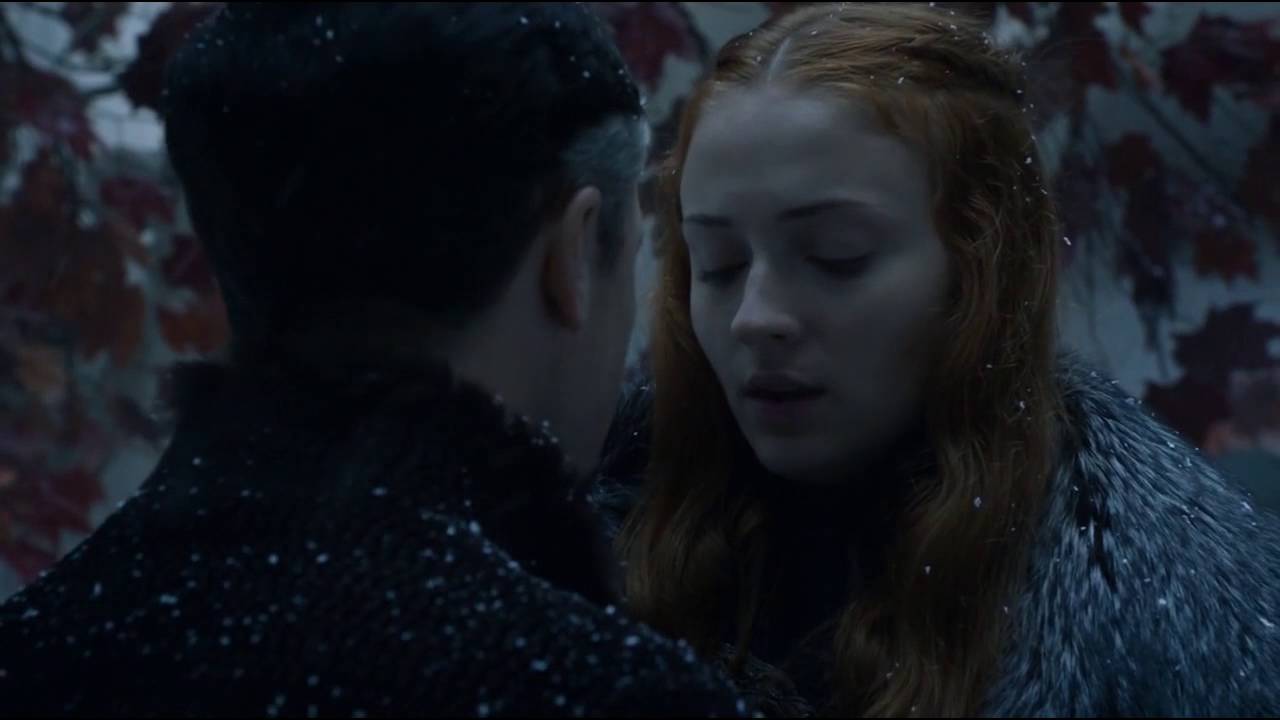 I’m having a little trouble understanding why she would actually do anything at all he wants. She seems fully aware of his duplicitous nature. She is a lady in her own right, back at Winterfell, Jon is on her side. Seems like she can basically do as she pleases. But he throws in that little barb about how she should be the one in charge, not Jon, because Jon is a bastard.

Littlefinger, have a seat. Stop trying to drive a wedge in there. I sweatergod.

Cut to a scene at Winterfell where Jon and Sansa have all the major houses of the north gathered with the Wildlings. First we have a little nonsense about how the Wildlings “invaded” which is quickly shut down by “Nope, we were invited, stupid.” Then it seems like they are going to have a hard time getting everybody on the same page. Until my favorite little Lady, Lyanna Mormont, speaks up and puts everyone in their place. First she points out all the people who refused to help with the battle to retake Winterfell.

After she’s done putting everyone in their place, she makes the following statement:

But House Mormont remembers. The North remembers. We know no king, but the king in the North whose name is Stark. I don’t care if he’s a bastard, Ned Stark’s blood runs through his veins. He’s my king. From this day, until his last day. 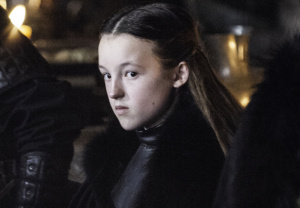 Y’all are pathetic. Listen up while a 10 year old schools you.

Everyone quickly falls in line and declares Jon the King in the North, and pledges their loyalty. I was watching Sansa carefully to see if this was pissing her off or not because of Littlefinger’s needling, and it didn’t seem to, until she caught his gaze, where he seemed to be saying See? I told you Jon would try to usurp. You should be in charge. GD it, PB. Get out of here already. Go back to training that little weird cousin of Sansa’s to be a useless lord. Be on your way. Of course it’s also interesting that Lady Mormont declares that Ned Stark’s blood runs through Jon’s veins, which we have just learned is not true. Though he is a Stark, to be sure.

What else? Oh a couple of smaller scenes – Sam arrives at The Citadel – where we see a flood of white birds leaving the tower, which we later find out via Sansa are white ravens which signal that “Winter has come”. Which the Starks seem to take as a positive thing, I guess because they are all a bunch of northerners who know nobody else will be able to handle it. Advantage, House Stark. 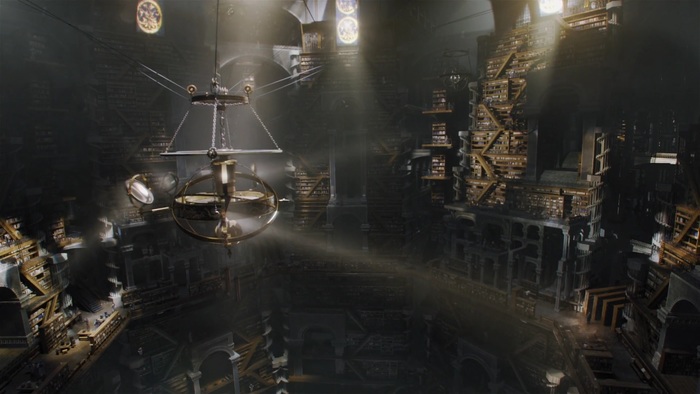 And we get to see Sam going into the huge and lovely library which I assume is about to be ruined somehow for him. Sorry, Sam. 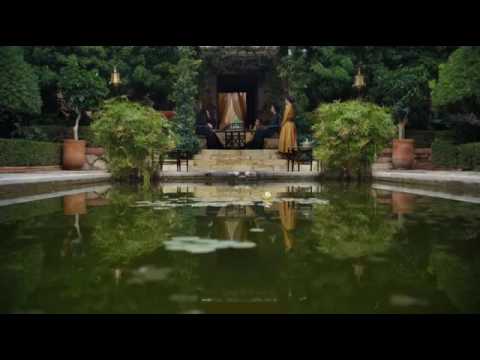 Olenna Tyrell goes to meet with the new women in charge in Dorne, which is exciting. This episode was so about lady power I could barely stifle my glee. It’s been a long time coming, fellas, so sit down and enjoy it.

I enjoy how even though she’s grieving for her grandchildren, she is still as witty and smart as ever, telling all the (I guess?) Queen’s daughters to hush their faces so the grown women can talk. 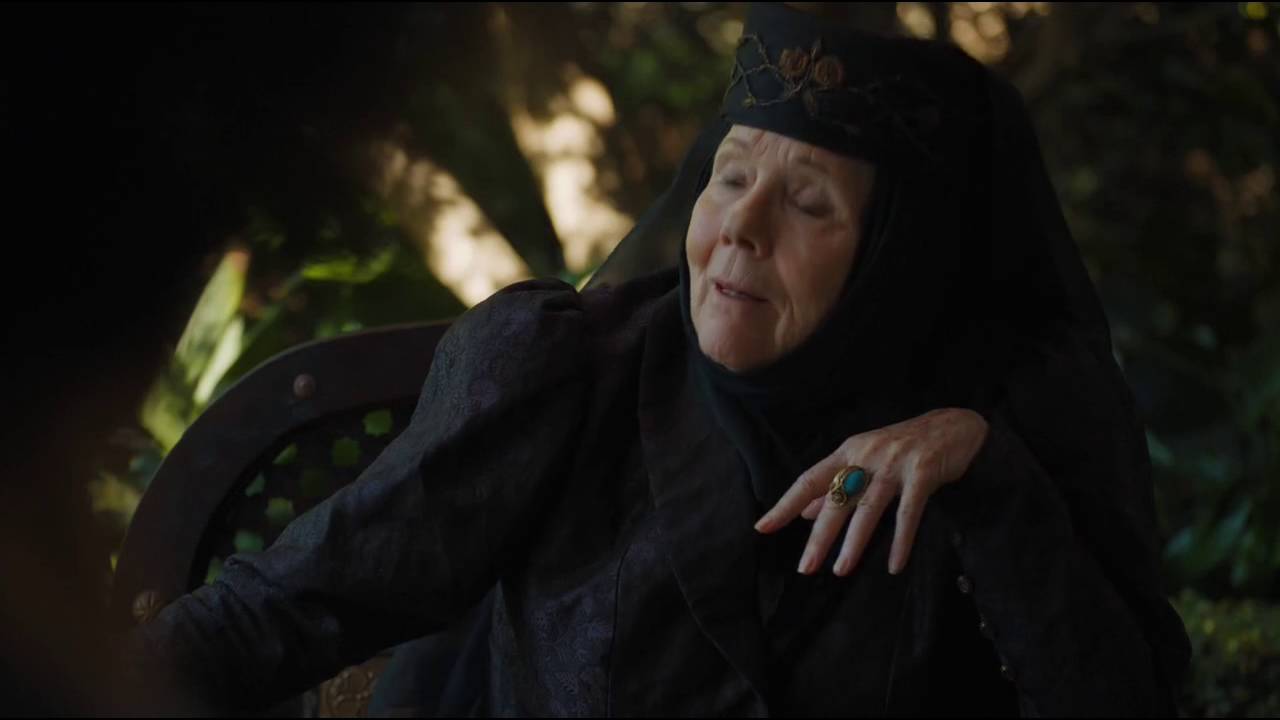 “Shut up and let the grownups talk, sweet cheeks.”

And then what happens? Varys walks in. Of course. I can’t really wait to see what’s going to happen with this crew.

We wrap up with seeing Cersei declared queen, to Jaime’s utter bewilderment… 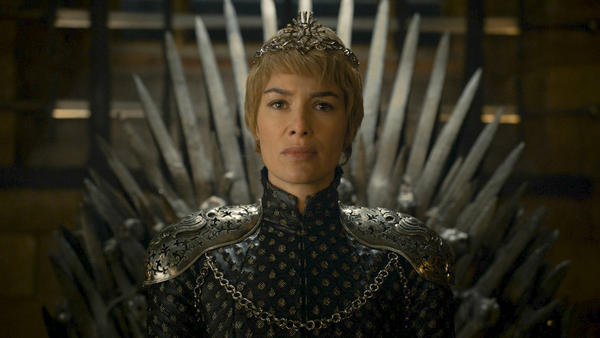 I don’t know what real “right” she has, technically, given the rules of this time and place, but I guess in a power vacuum people will just take whoever puts themselves on the throne and says they’re in charge. I mean, she was the wife of the last king that she didn’t give birth to, and Robert Baratheon has no [pretend] heirs left, so, maybe by the rules she’s in charge? No idea. In any case, clearly she has taken charge.

And Daenerys sets off in her ships. 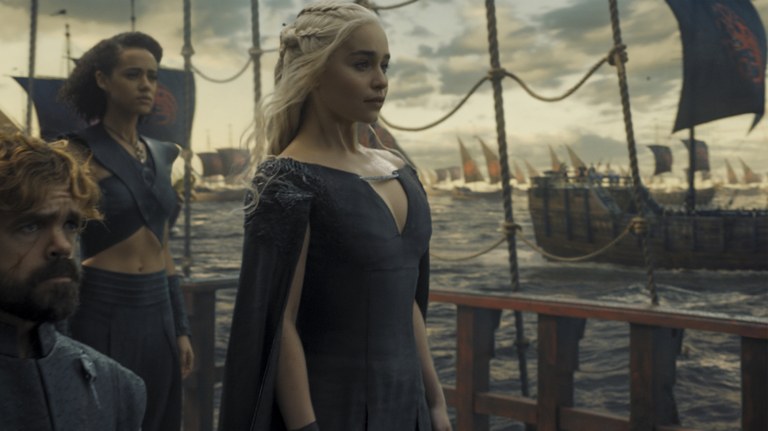 Knock knock, Lannisters. Who’s there? Oh, the mf-ing Mother of Dragons, that’s who.

What did you think? Please leave comments below! Any theories about what will happen next season?