I grew up in New Hampshire and now live in Maine. Between those two states that’s about a million ponds, lakes and streams. Why am I sitting here writing instead of fishing?

Fishing is an old family habit. I’ve got my grandfather’s fishing pole out in the shed waiting for me. It’s a True Temper Champion Metal Fishing Rod “Speedlock” with a cork handle. I think it’s circa 1947 because I’ve seen pictures of him with it dating from about then. His family had a camp on Wash Pond in Hampstead (Now known as Sunset Lake) They’d come up out of the gritty shoe city Haverhill in Massachusetts in the Ford Model A and end up in paradise. They did things like put on athletic tape so they’d have their football jersey numbers tanned on. There’s a giant boulder with his initials chiseled into it that will last for centuries. What they did most of all was fish. 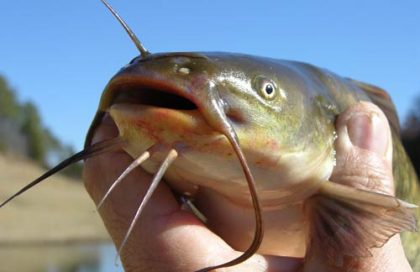 There’s a photo of his championship small mouth bass from the year I was born. He liked trolling in a rowboat out on the peaceful water. He died when I was in fourth grade which is just about the time that a boy can start wandering up to the fishing hole on his own. The pond, if it ever had any name other than that I don’t know it, was about two miles in back of our house. There was a small cave there just large enough for the bamboo poles tackle box and cast iron fry pan. Katey dog and I would get a few slices of bologna half a stick of butter and go fishing for hornpout. (For you southern types that’s a bullhead catfish common in the eastern states) Hornpout will hit on a sliver of bologna like it’s a twenty dollar lure. The butter was for the fish after it had been cleaned with the trusty Boy Scout pocket knife. They’re more bone than fish but there never will be anything better than eating your own catch with a wet old dog on a warm summer night. 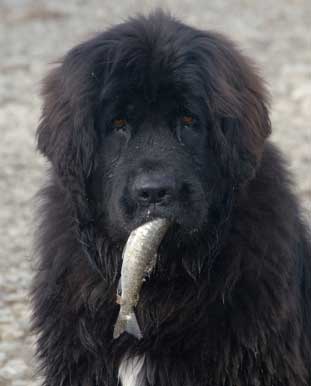 Katey Dog looked a lot like this. She also ate her fish raw.

I learned to play the harmonica out there. Not well you understand but Katey was a very forgiving dog and it kept the bears away. At some point in every boy’s life you reach the age where you need an official license to fish. It’s just not the same after that. You’re tempted to stay on shore and canoodle with the pretty girl while her boys go out on the lake fishing. Do you want to know the biggest fishing lie I ever told? She lost her jeans in the dark and we said she lost them going in after the big one that got away. It was a lucky day but we ended up going to the Piggly Wiggly for the fish fry. There’s something to be said for red haired southern women who love “fishing.”

I wouldn’t dream of changing a thing. I’m going to hang a sign on the door that says Gone Fishing. Maybe I’ll find a woman who loves to fish down at my favorite fishing hole. Who knows? I’m not above telling a whopper or two of a fish tale.