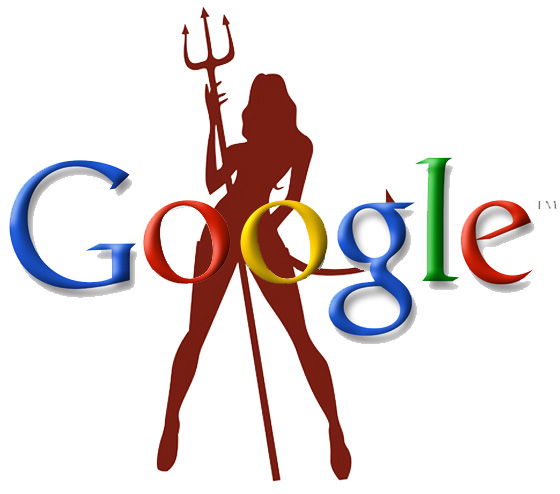 So please note that I’m not comparing The Batcave to Google or Facebook.  I’m merely pointing out that all this giant company shit is changing the way the whole Internet works.  And Google is sort of becoming the Wal-Mart of Internet stuff.  I’m not usually ahead of the curve on Internet things.  I pretty much relied on Joanne Colan for all my info when she ran Rocketboom.  Luckily my friends are hooking me up.

Amber Lamps from Thrifty Ninja gave me an invite to Google Plus.  If you don’t know what that is, it’s Google’s try at punching Facebook in it’s face…book.  I think the best idea it came up with is being able to group the people who you interact with into groups.  That way your friends don’t make fun of you because your aunt calls you Tinklefeet and your boss doesn’t find out you like it when chicks play with your  butthole.  Both of those things have happened to me on Facebook so score one for Google. 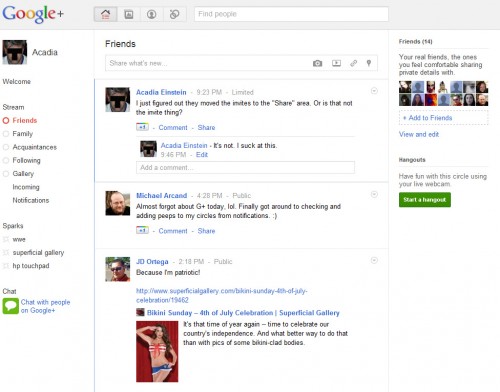 They also put together this sort of aggregator which let’s you put in a term and then branch out into a bunch of other places you can search.  I’m not really sure what it’s good for other than maybe book reports and typing in stupid shit so you can lol when you ready it. Like this!

The site’s called What Do You Love and they have the disgustingly short URL: wdyl.com.  Makes me sick.  If I had a domain that short I would totally be rich.  And some random collection of letters might be the trick I need.  Is there a site that has a list of all the domains that are available?  I don’t want to have to type a.com, aa.com aaa.com, aaaa.com and so on.  That would take forever.

I’ll work on that but in the meantime let’s talk about the other hot new thing.  Google Music is a way for you to upload your music to Google’s servers and then you can apparently stream it from wherever you are.  I have to assume there would be a cap on the number of machines you can add but who knows.  They haven’t even released pricing.  But I did get into it after reading Kyle’s post.  I got my invite pretty quickly and started uploading things.  I started Thursday night and it finished up sometime overnight.  I got more than 5k songs up there in that amount of time (I have a huge pipe).  I haven’t had a ton of time to play  with it (the app, not the pipe) but from what I’ve seen so far it works.  I don’t know what else I’d want it to do.  Tell me all the lyrics maybe?  Actually, that IS a good idea.

Amazon and Apple are launching similar services, but Apple has an edge with it’s Matching feature.  With their system (I don’t know what it’s called but I’m going to go out on a limb

and say it’s going to begin with an “I”) they are going to check your music against what they have in their library.  If they find a match, then they will give you their copy of the song and you don’t need to fart around uploading yours.  Seems like it’s a good feature.  Google let’s you put up 20k songs.  I can’t get my head around that many songs.  I know I have more than five thousand but I’m pretty sure that most of them are shitty things I ripped off of CD’s that I only bought because of one song or stole from a girl.  I guess I’ll stick with Google since my shit is already there.  What a good way to do things.  The lazy way!

So what does all of this have to do with Facebook and/or The Batcave?  Well, all these ‘social’ things seem to have made forums or message boards or whatever you want to call them obsolete.  I know that the big ones will never die but unless you are in a forum devoted to women’s feet or old BMW’s or fixin’ up your boat then you probably spend more time on Facebook.  But the thing that bugs me about that (well, other than the Cave dying) is that Facebook doesn’t bump things up to the top of my fucking wall or whatever it is I’m seeing when I log in.  Google does.  So I’ll give Google Plus a legitimate try.  That is not nearly as lazy so I deserve some credit.

Oh, wait, one other thing.  Well, two.  Looks like Google is working on making Gmail suck less.  That thing where all the emails in a string are squooshed together can be turned off.  Just go into “mail Settings” and turn off “Conversation View”.  I have liked it a million times better since I found that.  Now if I could only find a way to sort by sender.  And while you are in there, go to the themes and try to find the one I’m using now.  It’s clean and makes a ton of sense.  I’ll show you! 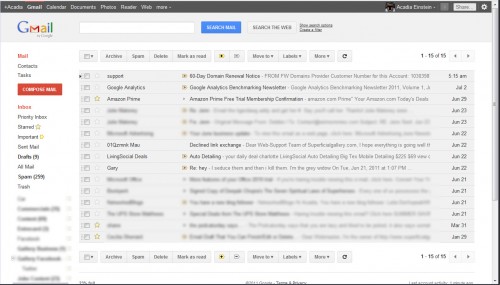 You should see the things I blurred out!