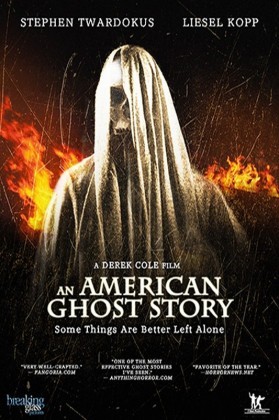 Disclaimer: An American Ghost Story is not to be confused with other “American” stories of the nightmare, horror, etc. variety. It is its own sheety thing.

Premise: An author and his wife move into a reportedly haunted house in order to write about the experience. The house looks to be a very frightening mid-century ranch and then sheet happens (not a typo).

All in all, I am left still unsure as to what makes this an “American” ghost story. Is it that the “haunted house” was a stucco ranch rental? There is a remarkable shortage of stereotypically “American” things in this film…it could have happened anywhere, or even Canada (I’m just teasing, Canadian bretheren and sisteren…you know I love you).There is nary a can of Coca-Cola, cheeseburger, flag or gun to be seen. I wish the ghost had worn a Coca-cola sheet , a ten-gallon hat, and shot up in the air while waving an American flag…alas. The good news is that if you rent this movie you will get your money’s worth, I felt as if I had been watching for days, instead of just an hour and a half; that is impressive, don’t say it isn’t.