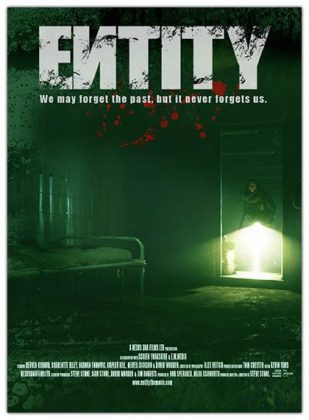 The N is backwards, so that you’ll know this happens in Russia.

Premise:  This found footage (??) mockumentary features a team of paranormal investigators who run into something they do not expect. This time with Russian experiments and psychics. What do you mean you’ve already seen this movie? No, this is a different one. Yeah, I mean. Okay, yeah. No, I’m saying this one is different. Shaddup and read the list.

1. This is perhaps one of the most derivative movies I have seen in a long time. It’s like the writers had a dart board, and on each space there were ideas from other movies…and someone isn’t very good at darts because this live-action Mystery, Inc. episode went way wrong in deciding to do a lot of previously done things at the same time.  They’ve got Cold War experiments, a paranormal television crew, found footage (sort-of), lots of shaky cams, “based on a true story” ness, ghosty critters that look like every other ghosty critter, Russian bad guys, and a psychic.

Stalin pays cash money for your psychic babies. (Yes, I know that Stalin was not in power in the 80s…I am not insane. Just laugh at the picture.)

2. I started with very low expectations, and then the movie started with a quote from Dante’s Purgatorio and I got all excited, only to be let down. That quote became the high-point of the film, and it happened exactly 24 seconds after the start. The quote was, “That brute which knows no peace came ever nearer me and step by step drove me back down to where the sun is mute.” Great quote. GREAT QUOTE! But, when the quote at the beginning of the movie is the high point that’s bad. I am still unsure what the quote had to do with the movie. What brute? What sun? No one was driving anyone anywhere. I think someone thought, “Dude, we need a badass quote,” then randomly came across something fantastic and thought, “That’ll do.” I always think it is a bad move for a film or book to remind viewers that what they’re watching is comparatively weak-sauce. This movie is weak-sauce. And to be reminded of the absolute awesome-sauce of The Divine Comedy at the beginning of a weak-sauce movie that has no relation to anything, well…I should have used the hour and a half to reread Purgatorio because: wow!

3. Actual premise: Back in 1983 the Russians were doing some sort of psychic experiments in Sadovich Siberia. I assume they were making super psychic soldiers, but who knows because “ooooh, mysterious!” Apparently whatever they were doing got out of control, and if the movie was to be believed bald albinos were floating around like zeppelins. After the (insert unknown tragedy) there were 30 people found in a mass grave at some point…I have no idea…the movie certainly didn’t move beyond the “based on a true story” premise to answer very many questions.  Fast forward to now-times and Kate Hanson of the paranormal reality show Darkest Secrets has assembled a crew to go and solve the mystery of Sadovich. Among the members are:

Yuri: a Russian expert on the area.

Kate: the Freddy of the bunch, “come on, gang!”

3. About 15 seconds into this movie I become concerned (yes, before the Dante quote) because this film is advertised as a “found footage” film, and begins with a mix of found-footage and outside shots which are clearly not “found.” It only becomes more random after that. If Entity was intended to be a found footage film, it seems like the writers and directors forgot that fact and at some point just decided “F&*K IT! Let’s just do whatever.” As a result viewers not only get treated to the familiar wonders of handheld shaky cam (movies, please stop, just stop), but we also get to see into the psychic’s visions. Unless, holy S#%t! Are we viewers picking up on her psychic waves? Woah! Am I psychic now? (Spoiler: I’m not.)

At certain angles these women are indistinguishable from one another. At other angles they look different, but I forget to care.

4. I have run into a serious, and perhaps personal, problem with this film. The scenes are low-light (some night vision), lots of shaky cam, and a little too much (in my estimation) fast focus. So, they cast two dark haired, pale women in the lead roles. I seriously cannot tell them apart 60% of the time. I kept getting distracted by the fact that I didn’t know who was doing what, or where they were. Again, that could be my problem. The good news is that when they talk I’m good because one of them has an American accent and the other does not.

5. Sound warning: Have your finger on the volume while watching this. The sound in this film swings drastically from “what did they just say” to “ouch, my ears are bleeding.” Also, those high-pitched squeals are high-pitched, and really, really loud.

6. Spoiler: they should have listened to whichever brown haired lady is the psychic (the one on the left, I think). When a psychic tells you that something is wrong, and to get out, it is good to listen. Yes, even if you don’t buy into the psychic thing. This is a good life rule, because if they’re wrong it isn’t a big deal, and if they’re right, you’re going to be sad for ignoring them. Also, apparently the ghosts of dead psychics are chattier than the ghosts of other people in some way. I did not know this.

7. Spoiler: Oh, snap, David has gone missing–which one is David? There are two male members of the Scooby Doo crew in this film. One of them is extraordinarily whiny. Extraordinarily, I say! The other one is, presumably, a card board cutout because I don’t remember anything about him other than he is the less whiny one.

8. Spoiler: Some ladies just like to hear you scream: One of the women (Brunette #2) hears a scream and says “That sounded like David.” It did? Because I don’t even remember what that m@#therf+~ker looks like. If he was the whiny dude, then IDGAF. Also concerning, how does Brunette #2 know what David’s screams sound like? Run, David, Run! And don’t run from the ghosts, run from the Brunette who is familiar enough with your screams that she can identify them from a distance. Later the Scooby Doo team may or may not find David. There is a lot of really loud noise, and he might be dead…maybe? IDGAF.

10. Spoiler Alert: Insert Standard “In Soviet Russia Ghosts Hunt You” joke: Oh, snap, Yuri is a dick. He knows the true story of the tragedy (of course he does) because his girlfriend was a psychic who was tortured at the facility (of course she was). So he drew the Scooby Team here because he wants the new psychic lady to find the ghost of his girlfriend. When they try to bail (because David? is dead), Yuri holds them at gunpoint and tells them they can’t leave, until…DUN-DUN-DUN, his ghost girlfriend shows up, battles a giant albino ghost with alopecia and is eventually eaten. Then Yuri is eaten. It’s your standard boy meets girl psychic love story (in Russia with floating albinos).

11. Spoiler Alert: Seriously, I’m giving away the ending here: I don’t know where Brunette #1 went, but Brunette #2 survives the attack and walks into the Siberian Forest. They are more than 80 miles from the nearest civilization. She gon die.

Conclusion: NOOOOO! Errybunnny dead now! In a reveal we learn that the last brunette never emerged from the Siberian woods, gasp! It’s a good thing the Scooby Team conveniently dropped their shaky cams where they could be easily found (as all good folk in “found footage” films do). Again, I’m not sure how some of the footage was “found” because it was “of a psychic lady’s thoughts.” What kind of cucumber does one need to film psychic impressions? And do they taste different than regular cucumbers? OH, are the cucumbers psychic? I bet they are. Never trust a psychic cucumber, unless it tells you that something is wrong and you need to get out. Then listen…just in case.

In conclusion, I conclude that there was little conclusion to the concluding part of this movie. The production value was actually nice at points (very atmospheric), the acting (people seemed genuinely scared and not as if they were reading off of a script that read: act scared now) and the music (despite the fluctuations in volume, and the fact that there would be no music involved were this actually a “found footage” situation)  were all great, but I nearly fell asleep when they were looking for David, and I seriously don’t know where the other David went or what happened to the other brunette. In short, this movie, despite the idiocy of its recycled elements, could have been good if the pace had not been so excruciatingly slow. But it was. It felt like (oh, no, I didn’t) purgatory.