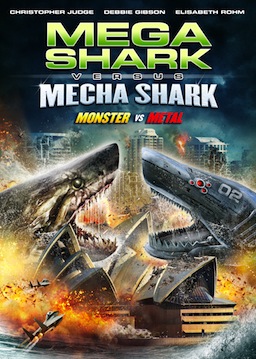 Premise: Someone decided that the best solution for a drought was to haul a big freaking iceberg into the Mediterranean…but, wait! NO! Inside that iceberg is a frozen Megaladon bent on world destruction. Obviously the best course of action is to ban boat and plane travel worldwide, and then build a giant robot shark to battle the megaladon.

Spoilers, but this is another Asylum/SyFy original, so I don’t feel so poorly about spoiling it.

Before I even get started on the grand list of spoilage, I just have to wonder, Superficial Gallarians, if the absolute best course of action in any situation is to build a giant robot shark. Building said robot shark to battle-bot a 200 foot long bag of teeth and muscle seems neither practical, nor sane, but who am I to judge the U.S. Military? For all I know there’s a fleet of robo-sharks out there right now subverting an evil army of nuclear dolphins. I’m not up on my geo-political awareness, but neither is whoever wrote Megashark v. Mechashark, so I am in  mostly misinformed company. 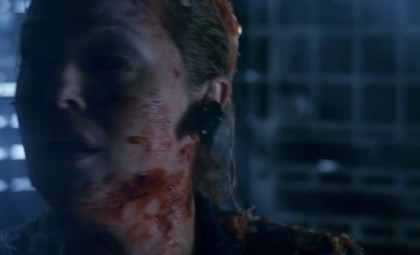 Conclusion: This film was pretty much what one might expect of a film entitled Megashark v. Mechashark. There were some fun moments of destruction, but there was also a lot of weaksauce in terms of special effects (although they did try) and ponderous unresolved subplots that lent nothing to the film as a whole. I recommend watching it in fast forward…just skip to the parts with Jerome. At least the chum shoot came into play? That’s what really matters.