Guilt/Girl Premieres with a Message of Strength for Survivors

Guilt/Girl made its world premiere Wednesday night at the Malco Theater in Smyrna, TN about ten miles outside of Nashville. The story of Sarah Parker is both unique and unnervingly familiar as a young woman, the lone survivor of a terrible mass murder, approaches the first anniversary of what the media dubbed the “Vanity Lake Murders.” Written and directed by Mike Dobrzelecki, Guilt/Girl represents not only his return to film making but a deeply personal journey of growth and recovery echoed by star Ashley Thomas. Using the idea and tropes of the classic slasher film as a backdrop, the story is less about the horror experienced on that fateful night as it is the long and arguably more terrifying road to recovery and personal redemption that followed.

Sarah Parker had two choices the night a faceless monster went on a killing spree at the abandoned camp where her and her friends chose to spend the weekend: fight or flight. Rescued by her friend Jerry (James David West) she takes off into the woods and nearby highway in hopes of finding help. Injured and in shock, she collapses on the side of the road and is found later by a good Samaritan who takes her to the hospital. Where in every slasher flick ever made this would be the end of the story, our final girl escaping into the mundane normalcy of the real world far from the killer’s clutches, this is in fact where Guilt/Girl begins. Treated like a suspect by police and a freak by the media and her own family, she spends the next year drifting through waves of abject terror, depression, and guilt over what happened. The bodies of her friends and the killer were never recovered due to the fire that consumed the campsite that evening and so she is left always looking over her shoulder and underneath her bed for fear that “it” is still out there.

The work of Claire C. Holland was a driving force in the recovery of Sarah in the film.

Guilt/Girl is an allegorical tale exploring the long journey of recovery that follows those people afflicted by physical and sexual abuse specifically and, in a larger sense, PTSD survivors as a whole. Often times the procedure of police investigators and medical staff is seeking out answers which means turning the screws to a victim to see if they crack. The assumption is always that there’s more to the story than what’s being told and they look for a way to break the truth out of a victim. Therapists, including Sarah’s in the movie, try to coax out the real nature of the trauma in order to help the patient deal with and move beyond what has happened to them. Introducing Sarah as a volunteer at a women’s shelter as part of her therapy helps her open up and move forward until one of the women she befriends goes missing, presumably in danger from her abusive spouse. The thought that she could again become a victim of her own dark, faceless assailant sends her into a spiral as she begins to plan out her own suicide in order to escape the potential future violence. In the end, she does see her attacker, returning courtesy of a live streaming video shot by a group of drunk idiots having an “anniversary party” in the burned out husk of the camp.

Confronted by the reality of the moment, that her suicide would only serve to give her attacker what it had wanted all along, she chooses the path of recovery in true final girl fashion by grabbing a shotgun and heading back to where it all began to finish what had been started. If this had been a straight up horror film, this is where the sequel would begin. In truth, as a metaphor for abuse and recovery, this is where she decides to take the power back and really begin her recovery and her future. Guilt/Girl manages to tackle some deeply sensitive and relevant content in a way that most major studios would never dream of. Focusing less on the attack and more on the aftermath, the personal story of Sarah’s journey, Dobrzelecki and crew brought to the screen a gripping and powerful message of survival. 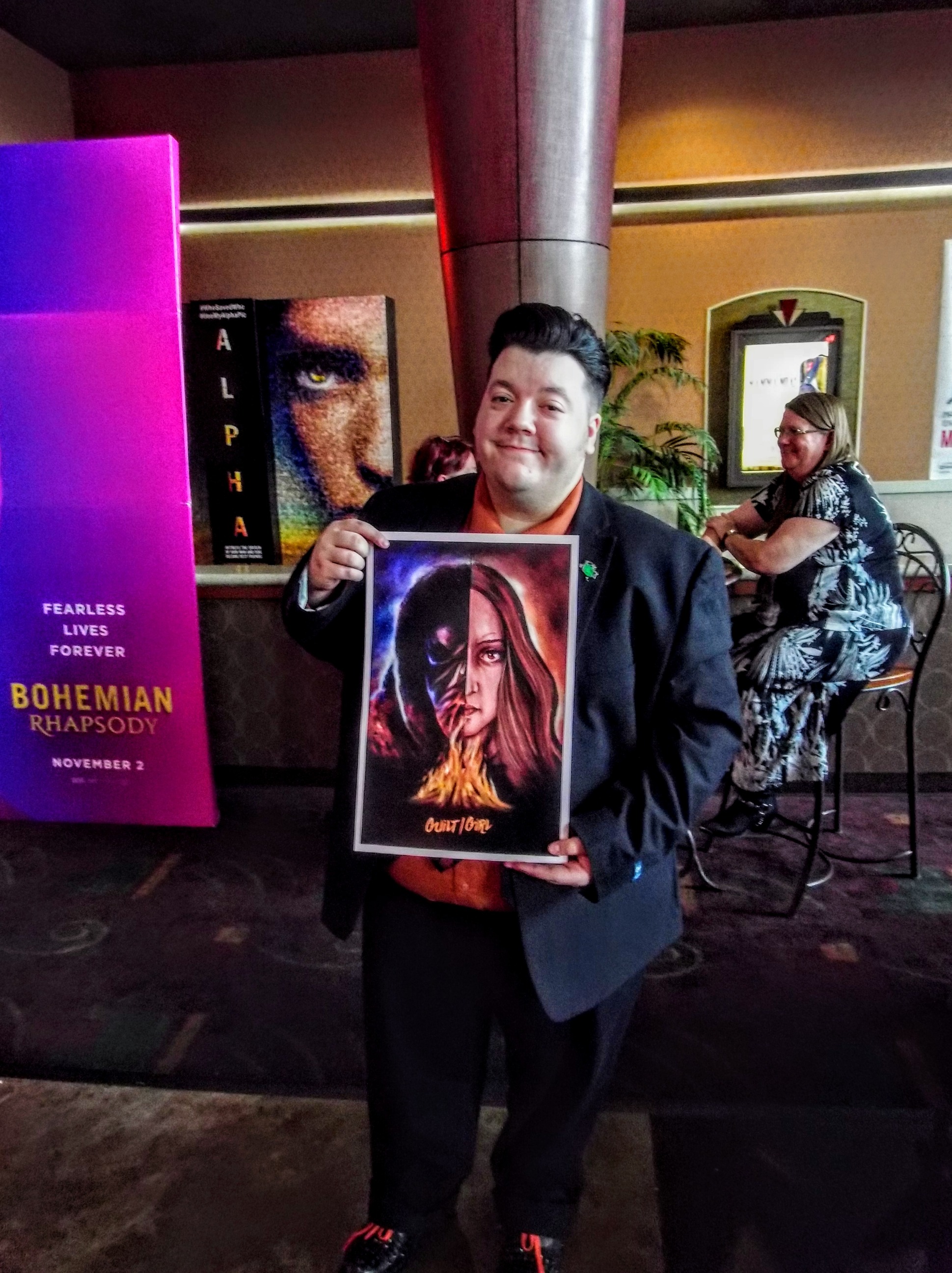 Writer/Director Mike Dobrzelecki holds a poster for Guilt/Girl at the Smyrna Malco Theater.

Guilt/Girl is back to editing, getting some minor touch ups to its sound mixing and audio before hitting the film festival circuit later this year. Meanwhile, Dobrzelecki’s next project, Giving up the Ghost, is scheduled to begin production in October. Another locally made horror allegory by a talented independent filmmaker and cast, it promises to be an experience all of its own.