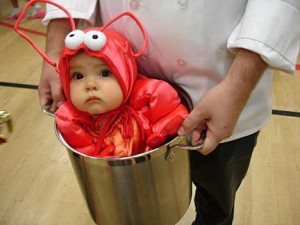 Let’s face it Halloween is just one of the stranger holidays. When else can you dress up your baby as a lobster and lug her around in a cooking pot and have everyone say how cute it is? That alone is just way weirder than putting sexy in front of everything and imagining it as a costume like Acadia does. We all participate enthusiastically in Halloween yet most of us have no idea about the weave of spirituality, death and hidden meanings behind our Halloween traditions.

Unless you’re a Neo Pagan Halloween isn’t even very religious. Some conservative evangelical churches put up elaborate Hell Houses to warn people of the dangers of trivializing paganism but Halloween is just a convenient time for them to promote their agenda. Even Jack Chick has a hard time thinking of Halloween as anything but a secular holiday even while sinners get dammed for enjoying it in his comics. (To be fair just about anything fun gets you sent to Hell in a Chick Tract)  A more common attitude is that of Father Gabriel Amorth. Father Amorth is an actual Vatican appointed exorcist. He states: “If English and American Children like to dress up as witches and devils on one night of the year it’s not a problem. If it’s just a game there’s no harm in that.” 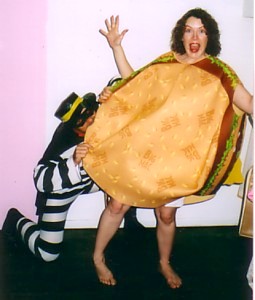 So your significant other has persuaded you to dress up as a sexy Big Mac and he’s turned the kid into a roast turkey. (This guy has some serious food issues) Everyone is enthused about the big costume party and the kids are ringing the doorbell and hoping you’ve got the good candy. (It better be Snickers I’ve got a carton of eggs) but what is really going on? More importantly why did I just break a tooth eating mashed potatoes?

Believe it or not the origins of Halloween comes are a confused jumble. Samhain which marked the Celtic New Year and the day on which dead souls revisited Earth is the most common notion of the start of Halloween but there were a lot of “Pagan” death and harvest festivals involved in the Roman Catholic Church declaring November 1st as All Saint’s Day (All Hallows Eve becomes shortened to Halloween) in 731 AD. The truth is that there seems to be a universal human need for traditions  where we celebrate the departed with food and drink.

One of the biggest modern competitors for Halloween traditions is  the festival of Mictecacihuatl (Aztec lady of the Dead) which has become Día de los Muertos. There is also the Bon Festival, Chuseok, Ching Ming Festival, Ghost Month, and even the Nepali Cow Pilgrimage, Gai Jatra, where a cow leads the spirits of the dead. It’s a human mystery why cultures diverse from our own as the Nepali with their spirit cow can decide to dress in costume and celebrate their day of the dead. 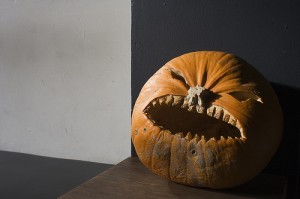 Did you know that only one percent of pumpkins sold are ever consumed as food? The rest are turned into Halloween displays. This is a First Nations custom. Their sacred trinity was the pumpkin, the bean and corn. While it is true that Europeans were carving faces into turnips before pumpkins were brought back from the Americas they sure as heck weren’t passing out candy corn. Chalk one up for the tribal people of America and maybe think about having some baked beans this Halloween too. 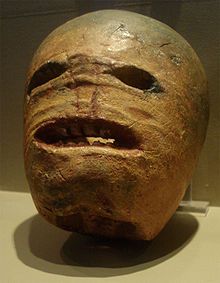 Trick-Or-Treat is also often linked to the Irish Samhain tradition of opening your doors and providing food to the wandering dead. Presumably if all the potatoes are blighted you could put a sheet over your head and get a free meal. The problem with this is you’ve got beggars in masks looking for soul cakes all over England too. Sin eaters and soul cakes just aren’t very Irish and to complicate matters further similar traditions were observed as far south as Italy completely removed from the Celt influence. 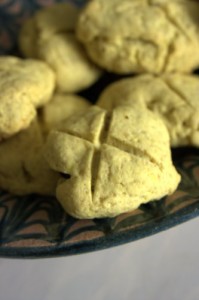 A more accurate evolution of Trick-Or-Treat is a desperate community response to the pranks and vandalism that are even now still common during Halloween. Even in rural communities where doors were too far apart for sweets begging pranks were common. Devil’s Night is commonly October 30th the night before Halloween. Egging Houses, soaping windows, flaming bags of poo and Toilet Paper decorated trees are common Devil’s Night activities but things often escalate. Detroit’s Devil’s Night became a massive festival of arson that peaked in 1994. Often blamed on Detroit’s inner city youth the truth was there was a lot of opportunistic insurance fires that could easily be blamed on pranksters during Devil’s Night.

What does this have to do with my mashed potatoes? Well all the spirits wandering around on Halloween are supposed to make it a good day for augury. There are hundreds of versions of games that young women play on Halloween to discover their true love. It’s one Irish tradition to chuck a ring into the taters to see who’s going to be lucky in love. Personally I think it’s all just a ploy by the cook to get the one with broken tooth to help wash the dishes since that seems to be part of the tradition for the “Lucky” one too. If you’ve a yen to discover your true love. Then back down the stairs holding a candle in your right hand and a mirror in the left with a mouth full of salt and gaze in the mirror exactly at midnight. It might be safer than eating the mashed potatoes your granny made for unmarried Aunt Maggie’s dinner.

Let this design on you prevail

To try this trick (It cannot fail)

Back down the stairs with candle dim

And in the mirror you’ll see HIM!

Graveyards, ghosts, skeletons, haunted houses, Jack-0-Lanterns and trying not to fall down the stairs at midnight. Halloween is a living holiday that’s evolving. There’s a growing trend to think of Halloween as an adult holiday. Trick-or-Treats is regarded with more paranoia every year by parents or maybe it’s because they just want to go to their own party. It’s the most popular party date in the United States rapidly overcoming even New Year’s Eve. Invent some new traditions or maybe adopt a few old ones that are strange to you. Set hundreds of tiny paper lanterns adrift to guide the spirits back to the other side or find a blue cat to pat because they’re as lucky as black ones are unlucky. Maybe even have some baked beans. 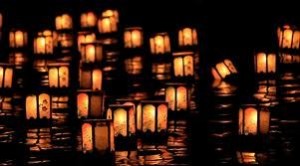 Each Lantern Guides a Spirit Home to the Other Side