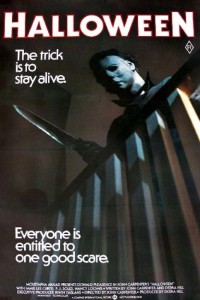 It’s crunch time, now.  And I’m pretty sure that people are just trying to figure out where their favorites are going to fall at this point.  Halloween is number three on the scientific list of the 31 Scariest Movies of All Time.  John Carpenter’s simple little movie about a terrible man doing terrible things on Halloween night is pretty much the gold standard of Teen Slasher Movies.  Good old Michael Myers knew how to slash him up some teens.

And Jamie Lee Curtis hermaphrodited her way into stardom with her portrayal of the poor girl doomed to get chased all over town by the weirdly masked maniac.  Rounding out the cast was Donald Pleasance as the doctor who knows what’s happening but that nobody will listen to.  Well, I guess they do at the end but by then it’s too late.

Probably everyone knows by now that the spooky mask Michael wears in the movie was a Captain Kirk mask painted white.  The signature music was composed by John Carpenter (who also directed it).  In fact, other than George Romero with his never-ending zombie movies, Carpenter is the only director with two movies in the top 10.

But all that isn’t what makes Halloween so good.  What makes it so good is that it’s a simple story told well.  There is a place for simplicity in all art.  Why am I talking about art in a post about Halloween?  Because, you smelly snob, really scaring someone is an art form.  Are there shocks?  Yes.  But there is more than that.  The slow, deliberate plodding of Michael Myers showed us what focus really means.  Crazy is crazy, but crazy people who can be crazy and have a special purpose are frightening.  Combine that with some boobs, some sweet murders, great music and a movie that I’ve never ever heard anyone say: “I’m sick of” and you have one thing.  Art.  Trailer after the jump.