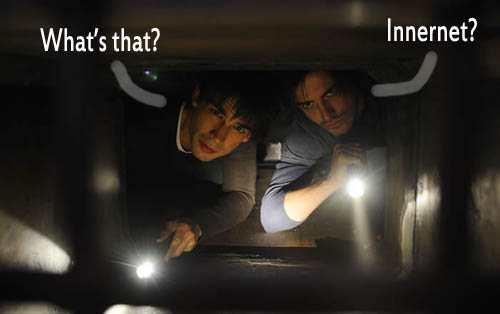 So the second weekly round table devoted to Harper’s Island is complete.  It was a little tougher than last week because nobody had watched the show but me when it was time to start.  But eventually it got going and we got a new participant.  The ever-prolific Maitland.  So our idea is catching on.  If we get one exta person a week, then by the end we will have….11 more.  Well.  Let’s see how it goes.

The episode was a good one and as an added bonus, we found out that we can embed the whole episode in a post.  So now we can post the ep before the discussion.  We are geniuses.  It really is a fun show, and watching it so far has lowered my cholesterol and made my bathroom sparkle! So watch, then read.  And then maybe take a nap!

Acadia : ok, it is time for round tablin’

Vange : i have to puke/pee first

Acadia : you people keep forgetting that i post the whole frigging chat

Hermione071 : well start after she said that.

Acadia : i am starting from when i said it’s time for some round tablin’

Maitland : i aint forget nothing sucker

Acadia : i am getting another beer then

Vange : if i die, you will fel bad for being mean to me

Vange : ok so that was awful

Acadia : this is all going in the post, fool

Acadia : we dont need another 500 words about your emissions!

Vange : i meant the show fuckhead

Vange : not my POSSIBLY DEADLY INFECTION

Hermione071 : OKAY BACK TO THE SHOW

Acadia : i dont get how standing in the middle of a rope loop makes it fling you in the air

Acadia : how does it know?

Vange : it alwasy works in cartoons

Vange : same with the pits

Maitland : do they have a lighthouse on this island?

Maitland : i knew the answer to that, i saw the lighthouse on wikipedia

Vange : i wanna be  lighthouse keeper

Hermione071 : isn’t a lighthouse like, the backdrop of the opening theme?

Vange : b/c those only illuminate so far

Maitland : because that will help the pirates

Hermione071 : well, I can safely say that one of tonight’s deaths was incredibly worse than the half severing of uncle marty.

Hermione071 : the chick that was BURNED ALIVE.

Maitland : woah, harry hamlin is on this show?

Acadia : she could have put herself out

Vange : yeah i was yelling at acadia

Acadia : he was, until he died

Hermione071 : but I don’t think that would have helped.

Hermione071 : she was burning alive!

Hermione071 : she was probably focusing on the excruciating pain.

Maitland : wow, why did they kill him off already? do they have another LA Law THE MOVIE in the works?

Hermione071 : oh god, I would hate to be doused and lit on fire.

Hermione071 : haha, they killed him off in the pilot ep!

Acadia : they are redoing clash of the titans

Vange : it doesnt hurt that much when it keeps on

Acadia : because he handled being upside down with aplomb

Maitland : i think jd dunn is the killer

Hermione071 : the british guy and little face seem SO wrong for each other.

Vange : he needs to work on his abs

Hermione071 : but I am impressed with little face, she has some standards.

Vange : that was pitiful

Vange : do a crunch, pull yourself up to the rope and climb up to the tree

Vange : him not you jo

Vange : i did not care for all the babmi mutilation

Acadia : no, fuck her

Acadia : who went in her room and put the clipping there

Hermione071 : anyone else completely creeped out by Kelly?

Maitland : no absolutely not

Hermione071 : the one who got hung at the end

Hermione071 : I could have done without seeing her and the grooms fug brother get it on.

Maitland : yeah, must have missed that

Acadia : yeah, but now the bodies are getting found

Maitland : so the killer sucks at hiding bodies is what you’re trying to say

Hermione071 : now they know someone is out to get them!

Acadia : so next week they are going to have to deal with why they don’t leave

Hermione071 : maybe the killer fucked with all the boats

Maitland : because the last ferry to the mainland left and it’s thunder and lightning out?

Maitland : aint that normally how they roll in those horror what nots

Acadia : yeah, but they will have to do more than that

Acadia : there are enough people on the island to support a church

Maitland : maybe they, i dont know, SUNK the yachts

Acadia : with a dead priest

Vange : i get mad when TV Shows have less than gorgeous ppl on them

Hermione071 : I hate when people invite themselves to stay with you.

Vange : how long has it been since fat nose was there?

Vange : yeah i havent seen you in SEVEN years but can i move in with oyu?

Hermione071 : in your studio apt no less!

Hermione071 : if she really wanted to leave the island so much, she could have easily done so.

Vange : girl in need of rhinoplasty is too long tho

Hermione071 : I just don’t get how fat nose got together with cute fisherman

Vange : we can compromise on scarf girl

Acadia : just call her scarf girl or you are banished

Vange : i offered a comromise

Hermione071 : love me some Chris Gorham!

Hermione071 : groom’s brother is so ridiculously fug though.

Vange : or the ernest preppie?

Acadia : this is riveting

Hermione071 : we agree to disagree!

Vange : ok so the babmi mutilation was terrible

Vange : did not enjoy

Acadia : was that the brother?

Acadia : why was he washing blood off his hands?

Vange : would prefer to see random girl burning and twirling

Hermione071 : it was implied

Vange : that crazy brother of preppie did the deer deed?

Vange : but it WAS implied, no?

Hermione071 : I have a question

Hermione071 : why the fuck does the bride’s dad hate the groom so much

Vange : he’s from wrong side of tracks

Acadia : he hates him cause he is poor

Hermione071 : just because he doesn’t have money?

Acadia : and because the brides father killed the grooms parents

Acadia : for some reason we dont know about yet

Hermione071 : i want to punch the FOB in the face

Hermione071 : so is wakefield alive?

Hermione071 : I thought the dude was dead.

Acadia : well, i think the fact that they are offing people so quickly

Vange : so its his previously unknown twin or some shit

Vange : or its a risen fromdead thing

Acadia : means they really want to get down to the guessing quickly

Vange : which will make me kill the writers

Hermione071 : this show has got to be a miniseries, there is no way they can do a 2nd season with the killing rate they have got going on here.

Vange : i think that’s a given?

Acadia : they wont do a second season

Acadia : it is a mid season replacement

Acadia : it is a fun mystery

Acadia : that will engage people and then be done with

Hermione071 : ok wiki says: Harper’s Island will have only one season comprising 13 episodes.

Acadia : why did someone break into the museum and just steal one thing?

Hermione071 : I thought that was used as the murder weapon?

Hermione071 : was the one originally used by wakefield

Hermione071 : during the original murders

Acadia : it was just a little ass thing

Acadia : who you gonna kill with that?

Vange : or hang someone with

Maitland : ya’llstill going about this island?

Vange : how much you wanna bet, they thorw in a bunch of meaningless shit like that

Vange : for no reason except to make oyu wonder

Vange : like, it has NTHING to do with anything

Acadia : they have to have everything come out in the end

Acadia : it is TV rules

Vange : sure but they can put in red herrings,no?

Vange : i sooo would

Acadia : yes, but they will be exposed as such

Vange : or the museum thing?

Acadia : they will explain it all

Hermione071 : you can’t explain everything RIGHT when it happens

Hermione071 : you have to engage people

Acadia : they need to let people try to figure it out

Acadia : not you two doofuses, though

Acadia : well, this was a good round table

Acadia : i will be posting it now

Hermione071 : do you have any final thoughs?

Acadia : i think that they have a lot of people to kill off quickly

Acadia : so the main characters can have a lot of peril

Vange : how many cast members are there?

Vange : and how many eps?

Acadia : was not even IN this one

Vange : you know what would be awesome

Vange : if they just have the final episode

Vange : i would LOVE that

Vange : you dont think that’d be a great prank?

Acadia : stop making fun of it, or you are so banished

Vange : ithink that would be cool

Acadia : how would you feel if dr whatever didnt tell nurse fuckalot that he loved her on grays anatomy?

Acadia : you would be all curled up in a frigging ball

Vange : who are oyu talking about?

Vange : izzy and her dead BF?

Acadia : i dont know, i have never seen that gay show

Hermione071 : he thinks meredith grey is a nurse.

Vange : you so have!

Vange : grey’s Is dumb tho

Acadia : ok – end of round table

Vange : ok so you dont like my AWESOME prank resolution

Acadia : it breaks the rules

Vange : it is POSSIBLE

Acadia : they know how to keep their jobs

Vange : they havent read your thoughts

Acadia : no, it is not possible

Vange : its a one off

Vange : they are already fired