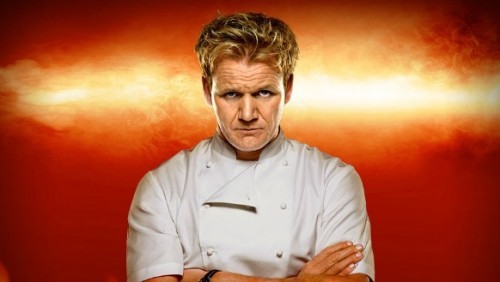 Part two of the premiere picks up with the fallout of the night’s horrendous performance on the Men’s Team.  Two chefs down already, tempers are high, and lines are already drawn in the sand.

Woken up at 6am by a screaming loud guitar concert, the chef-testants gathered outside for return to basics, and their next challenge. Working in teams of two, they would need to prepare:

Are they up for it?  What do you think? It’s 6am. Sparks fly but the men pull it out thanks to Joey, the only one to work alone, who managed to cook his food to perfection.

Blue Team: The men go to Palms Spring for R&R. They get to know Chef Ramsey a little better and he gets to know them. Brandon tells everyone how wonderful he is and how much his family loves his cooking. (Chef Ramsey’s response to Brandon’s monologue is, “Huh” as in, “Huh, how can this guy even stand being in a room with himself?”

Red Team: The girls got to clean the grills and drink the left-over meat…blended into drinks. Adding insult to their loss, the restaurant receives a delivery of cow.  The ladies then spend the afternoon cutting it down and preparing themselves for the next night’s service. Well, most of them do. Brandon and Carrie spend the evening drinking wine and getting to know each other very, very well.

Carrie can’t handle table-side Caesar salad and Krupa is sent to pick up her slack. Brandon jumps the gun on entrées, cooking sea bass before it’s even ordered, then attempts to pass it off as fresh 10 minutes later…and lies about it. Maybe they shouldn’t have spent so much time getting to know each other. Elise is shown to be a loud mouthed pain in her team’s ass. The Blue Team gets sent upstairs and the Red Team is brought in to finish their service.

Come to win or go the hell home.  Plain and simple. The ladies rocked both kitchens and kicked ass. Brandon and Chino are called out. Brandon goes home. Men minus three chefs in two episodes. Chef Ramsey asks the Red Team to ofer a volunteer to help the Blue Team and the entire Blue team has the nerve to say they don’t want the help.  Ramsey slaps them down, and that’s a wrap for the premiere of Hell’s Kitchen, Season 9.