Hells Kitchen – You’re a Joke to the Industry 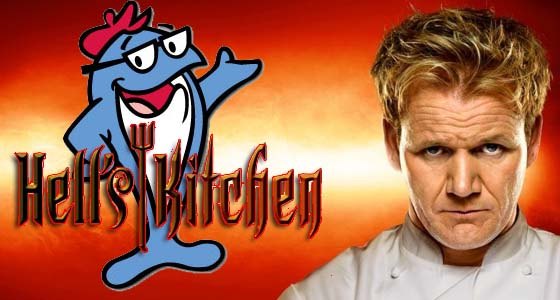 The punishment involved a tuna! Hence, a tuna!

This week’s Hell’s Kitchen featured the usual bunch of yelling, some cooking and inexplicable behavior by a contestant.  Someone quit because he got yelled at.  Did they not know what show they were on?  Not expecting to get yelled at on this show is like not expecting to get glitter and tears on you at a strip joint.  But some dude got all bent and walked out in the middle of service.  Not even the protestations of the little Belgian dude could get him back.  The little dude said something like: “Do you know how many people would like to be in your shoes?”.  So the guy took his shoes off.  Heh.  He’s still an idiot pussy quitter, but that was funny.

Also, this week, Ramsay did something he does fairly often.  Rather than allow the teams to, you know, play the game, he just eliminates whoever should have been eliminated.  The guy he kicked out this week was the guy who sucked the worst, two weeks in a row.  He was not even one of the two nominated.  He just deserved to leave.  So Ramsay, I guess figuring that voting out the good cooks would be bad for his restaurant, plucked the dude out of the back row and sent his ass home.  That’s good gamesmanship.  The tale of the tape, including the RIDICULOUS number of bleeps after the jump.