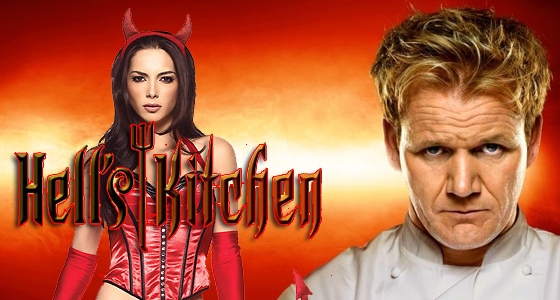 Okay, so first off: SPOILERS!  If you Tivo Hell’s Kitchen and plan on watching it later, then don’t read this.  Then again, it’s the beginning and you won’t remember who the fuck is who so go ahead and read it.  And I’m not going to actually review the show as much as tell you the good parts in bullet (preferably numeric) form.  Before the jump, the Master Stat of the show.  After the jump are the other stats and the spoilers.

Number of bleeped out swears: 99.  Ninety Nine. I counted them. Fuck.  That’s a lot of swears.

Bumps (the things before the commercial that always include the pitchfork):

Final thought:  The woman who was eliminated sucked.  She fucked up the scallops like 15 times and it threw off the whole team.  So she admitted that she sucked.  Then she admitted to Ramsay that she fucked up and that she wanted another chance.  She didn’t get one.  In the exit interview she said, “I admitted I screwed up.  So kudos for me for standing up!”

It was on TV.  Everyone saw you.  You didn’t “stand up” for anything.  You just said, “Yes, that person you all saw sucking was not my…evil twin.”  Kudos for you?  BAH!  You suck, lady.  Oh, and Ramsay pretended to make out with a contestant but it was his wife and it was stupid.