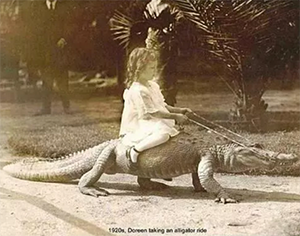 I had a dog, a parakeet, and a cat. All of which I didn’t appreciate. My job was to walk the dog, feed the parakeet, and clean the cats’ litter box. Still, today was bring your pet to school day, and I’d opted to bring Sylvester, the parakeet. He was in his cage by the merry-go-round, ignored by all except Mark Wynn’s cat, who was suspiciously eyeing the bird.

We were all waiting for the class reject to show up. She claimed she had an alligator named Chompers.

All semester long she’d been talking about her pet alligator, but no one had believed her. It was impossible to own an alligator, we said. They were too dangerous. They weren’t native to Pennsylvania. They couldn’t be housebroken.

Chompers was a fantasy. A lie, and we all knew it. One lie among many she’d been telling all year long. Her constant lies had ostracized her; she had no friends because she never told the truth.

And yet here she was, walking Chompers on a leash across the playground while the rest of us looked on in shock and terror. Chompers was not a petite alligator. He was at least seven feet long, covered with bumps and ridges, and sporting a long, tooth-filled, snout. Which was open and smiling as they approached.

We all found safety behind the slide as she walked up. Her blonde pigtails bounced with Chompers’ every step, and I saw she was straining to keep him under control. She stopped a few meters shy of the slide, and Chompers eyed us all hungrily.

“Hi!” she said loud enough for us all to hear. “I brought Chompers. Does anyone want to pet him?”

None of us moved. None of us said a word. I mean, Chompers scared me, but I was also processing how cool it must be to have your very own pet alligator.

So, I suppose I shouldn’t have been surprised when she singled me out. “Brian,” she called, “Come pet Chompers. I know you want to.”

I did not want to. At all. But she had effectively called me out and I had to respond or get labeled as a chicken. I left the relative safety of the pack amid a few whispered prayers and walked up to Chompers.

To my credit, I didn’t shake, but I did hesitate. Something about her, the way she stood there staring at me, twirling her gum between her finger and her mouth, put me at ease. Still, I stopped a foot shy of Chompers, unsure how to proceed.

I looked at those rows of long teeth, “You sure?”

I pulled my gaze away from the reptile of death in front of me and looked at her. “Ever?”

“Ever,” she said evenly. “Now pet Chompers before you hurt his feelings.”

I petted Chompers. I scratched between his two eye ridges and he closed his eyes and … purred. The rest of the kids, behind the slide, gasped and murmured in excitement as I ran my hands along Choppers’ head.

“So,” I said between scratches on Choppers’ head, “You never lie?”

She popped the gum bubble she’d been blowing, “Never.”

“And the spaceship in your back yard. The one you use to go to the moon. It’s real?”

She nodded, “Yep. Wanna go to the there after school?”

This time there was no hesitation, “Yes.”

“Cool,” she said, blowing another bubble.