Here’s a dude I’m rooting for… 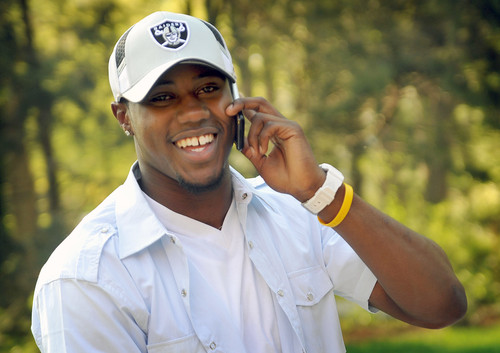 The surprise of the NFL Draft’s opening round on Saturday was that the Oakland Raiders selected Darrius Heyward-Bey. Mel Kiper and Todd McShay, the draft knuckleheads ESPN has on all day, both gave the Raiders an F grade for their draft.

“To me this has bust written all over it,” said McShay. Kiper chimed in about how basically he thought Bey was a great kid, just that by no means should he have been taken number 7 overall. Especially with Michael Crabtree on the board. Crabtree, it just so happened to work out that he would wind up across the bay in San Francisco.

Now, I’m not saying Heyward-Bey should have been taken ahead of Crabtree. I don’t agree with that. It’s just that when the ESPN talking heads all vehemently doubt the kid, yeah, I wish him best of luck. This was a guy the Raiders liked, so they went and got him. Why should they have passed on the guy they wanted because ESPN analysts had him rated #30? Now, some folks might be saying, why not trade down? Well, what happens if they trade down to someone who wants Crabtree…then a team jumps in and takes Heyward-Bey? At the end of the day, if you got the guy you wanted, then you’re happy. Sure, you can look at it and think you could have worked the system a bit better, but you can’t be disappointed if you got the guy you targeted.

I’m rooting for Heyward-Bey mainly because I like to root against one of the most over-rated analysts in sports, Mel Kiper.


25 years ago Mel Kiper was analyzing every player in the NFL Draft and so he caught on for depth of knowledge about the draft. How many people really look forward to Kiper’s analysis in the draft? Especially when it comes to players that everyone knows. Kiper caught on because he could tell you about the offensive tackle or safety your team took in the 5th round. And, really, as a fan, all you want to hear about your 5th round pick is a little bare bones info, and Kiper delivered that on every dude.

I mean, really, who gives a shit about Kiper’s opinion on Percy Harvin or Matt Stafford? If you’ve seen the dude play football enough, you don’t need Kiper to tell you about him. ESPN does a great job of protecting him, however. They tell you about his hits, they avoid his misses and they ask him about everything and keep him front and center.

If Darius Heyward-Bey is the next Jerry Rice, ESPN won’t tell you how Kiper missed on him. They’ll just let Kiper hand that F grade out to the next first round kid he doesn’t like that’s got a great shot at a successful NFL career.